Stations at Daylesford Abbey invite walking meditation on the cross 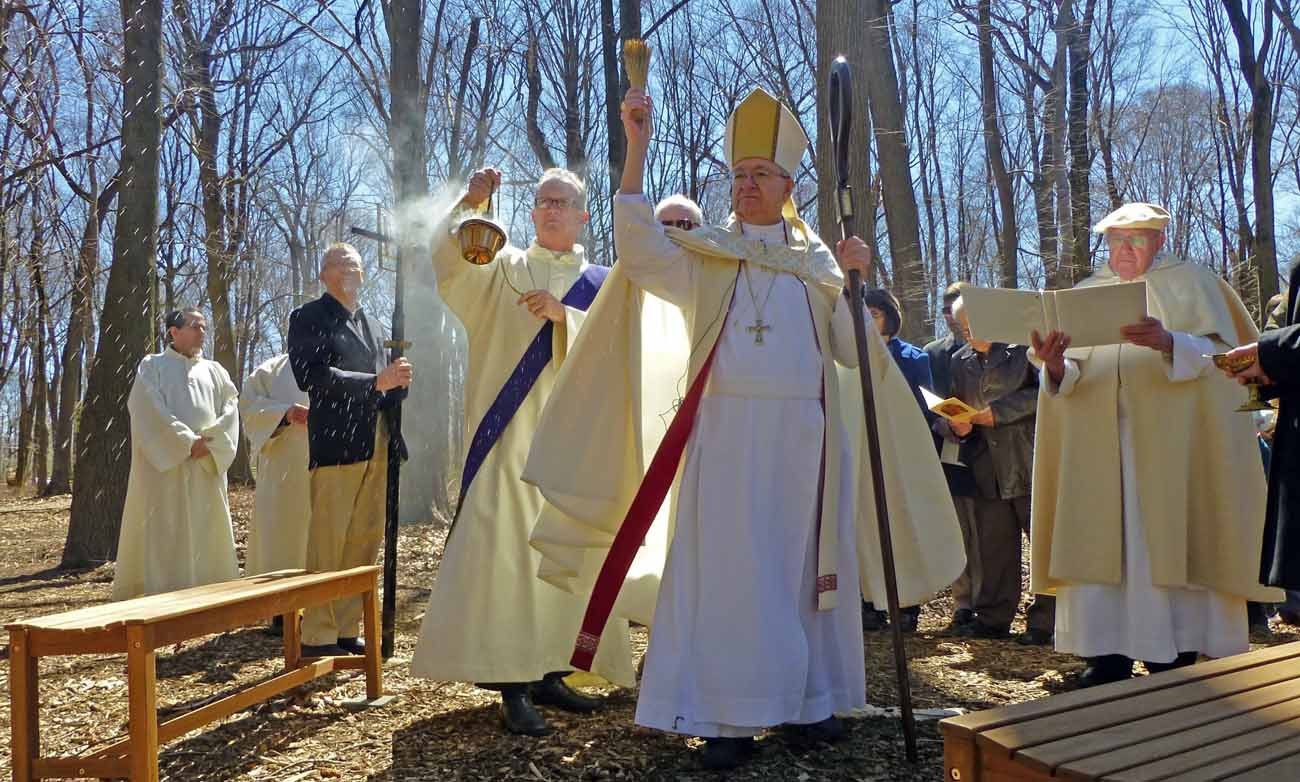 Just in time for Holy Week, a new wooded meditation garden at Daylesford Abbey in Paoli, featuring the Stations of the Cross, was formally blessed April 8 by Norbertine Abbot Richard Antonucci.

The stations, 15 in number including the Resurrection, are the result of 18 months of careful planning, according to Norbertine Frater James Garvey, a transitional deacon who oversaw the project.

The garden is entered through a gateway featuring a statue of the Archangel Gabriel, a patron of pilgrimage and healing and an important figure in Norbertine spirituality because ministry to the sick is part of the order’s charism.

The individual stations are placed in rustic alcoves off a meandering path through a wooded area of the abbey’s property. They feature images in the style of bronze images on the doors of San Zeno Basilica in Verona, Italy, which were crafted around the 12th century, just about the time St. Norbert established the Canons Regular of Premontre (Norbertines).

In the secular world St. Zeno Basilica is a pilgrimage destination and the fictional clandestine wedding site of Romeo Montague and Juliet Capulet as imagined by William Shakespeare.

The tree-mounted stations feature small wooden shelters in a shape mimicking Daylesford Abbey itself. They are crafted of ipe, an extremely heavy and durable hardwood from the Amazon, and could well outlast the trees in the garden. They are surmounted by the necessary cross and the numeral for each station.

The bas-relief images of the individual stations are approximately one square foot and were crafted in Ortizzi, Italy in fiberglass, a material unknown to artisans in the Middle Ages.

“This beautiful but simply laid out path is a tremendous addition to the overall spiritual invitation which we as an Abbey try to afford all who come to Daylesford,” said Abbot Antonucci. “Walking the way of the Lord parallels so often the paths we sometimes find ourselves on.”

Most people associate the Stations of the Cross with the prayers and hymns composed by St. Alphonsus Ligouri in the 18th century, but the meditation may take many forms.

To facilitate the devotions of those who may have special intentions, laminated copies of devotions for special causes are located at the garden’s entrance.

These include a Stations of the Cross prayer for children, for seniors, for widows and widowers, for the divorced and separated, for vocations, for migrants and immigrants, for 12-step recovery, for forgiveness and reconciliation, for contemporary traditional reflections, stations with psalms and stations with Pope Francis.

“Deacon Jim Garvey has composed 12 different themes for praying the stations,” Abbot Antonucci said, adding the themes “could describe the personal journeys of many of us. I’m very grateful to Jim as well as to our donor whose resources allowed us to construct this spiritual path in memory of her loved one.”

The entire project was made possible through a donation by Colleen DelMonte in memory of her late husband Bryan DelMonte, Frater Garvey said. 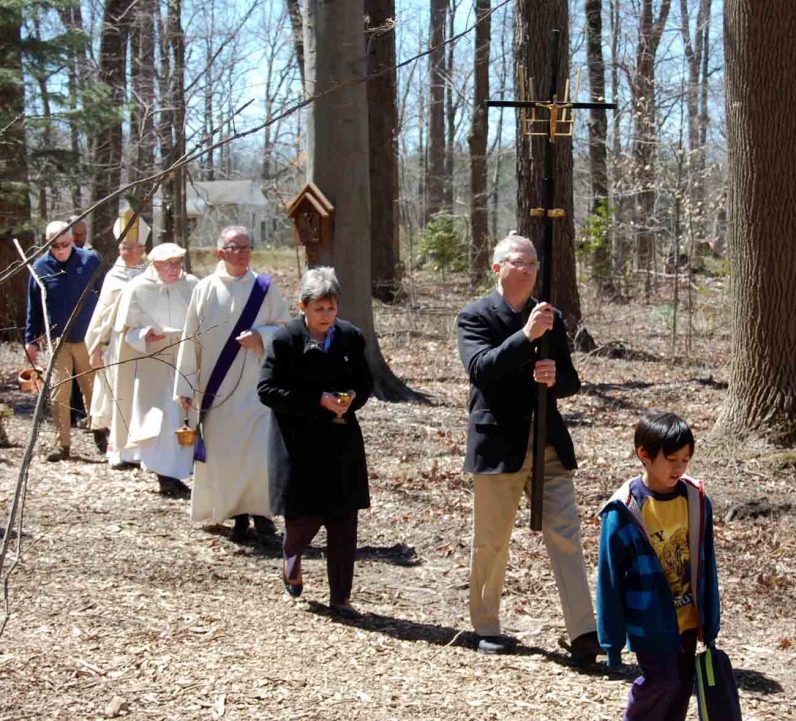 A procession winds along the wooded path of the Stations of the Cross on the Daylesford Abbey grounds during the April 8 blessing ceremony.

PREVIOUS: Teens learn value of life from inspiring woman with Down syndrome