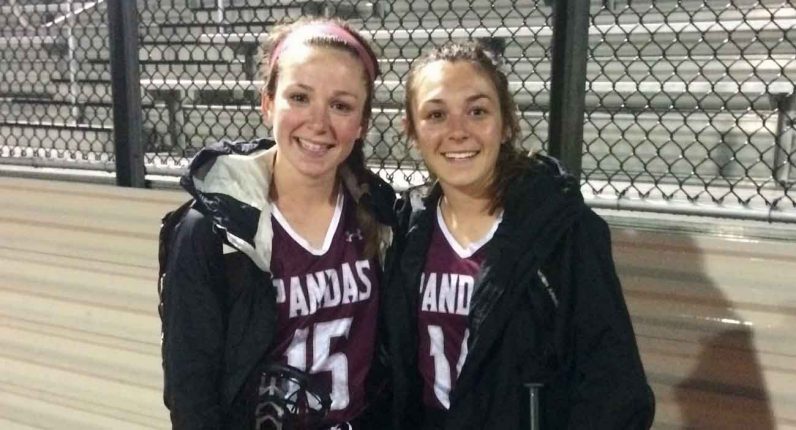 Keeley Weis (left) and Paige Brady, leaders of Bonner-Prendergast’s girls’ lacrosse team, each recently hit a milestone with 100 career goals scored, which they accomplished in the same game.

The Msgr. Bonner and Archbishop Prendergast Catholic High School girls’ lacrosse team has made history as senior co-captains Paige Brady and Keeley Weis both scored the 100th points of their high school lacrosse careers just 40 seconds apart in a 22-3 rout of John W. Hallahan on April 11.

This marked the first time that two members of the team achieved such a milestone within such a short amount of time.

Brady and Weis did not see this achievement coming. Just before the Pandas began their game with Hallahan, head coach Amanda McCloskey informed both players that it was well within their reach and that this could be the day for both of them. Going into the match, Brady was four goals away from the century mark and Weis was five goals shy.

“She did not tell us beforehand,” said Brady. “It was pretty cool. I was not expecting it.”

Brady tallied her fourth goal of the game as well as the 100th of her career. Less than a minute later, another milestone was achieved when Weis found the net. They both scored the exact number of goals on the day that they needed to go for 100 on their careers.

“I didn’t know about this until the huddle before the game,” said Weis. “It was a whirlwind of emotion.”

In addition to their goals, Brady finished with four assists on the afternoon, and Weis notched two of her own. As good friends, they were very happy to share their moment together. Typically, they gave credit to the help and support of their teammates.

“There was so much support in making it possible for us to score,” said Brady.

At the top of the list was Coach McCloskey, whom Weis called, “everyone’s biggest supporter. We’re blessed to have her as a coach.”

Following that important day, Brady and Weis have kept their momentum going. They prevailed in a 21-10 victory over Conwell-Egan in which Brady accounted for five goals and three assists and Weis added four goals. Bonner-Prendie picked up a 15-13 non-league win over Marple Newtown with Weis (four goals, one assist) and Brady (three goals, one assist) leading the way once again.

“Keeley and Paige are very talented,” said McCloskey. “They are both stellar ball handlers and scorers.”

Playing hard in a non-league game was a wonderful way to help prepare for what lies ahead. While Bonner-Prendie has been dominant in Philadelphia Catholic League action, the Pandas know they are in for tough competition as they seek their spot in the playoffs.

“We want to pick our heads up and get the wins,” said Brady. “Playoffs are looking bright. We have the chance to get the No. 1 or 2 seed. Freshmen have helped us.”

They will be taking on Catholic League teams including Archbishop Carroll, Lansdale Catholic, Bishop McDevitt and Cardinal O’Hara.

“We have to take it one game at a time,” said Weis. “We definitely have a good shot at the playoffs. I think we can make it to the championship this year.”

Together, Weis and Brady share many years of lacrosse experience. Where will their futures take them? Brady has committed to St. Francis University where she will continue to play lacrosse. Weis will be attending the Catholic University of America to major in nursing. She will not be taking her lacrosse career to the collegiate level as she would like to focus on her studies.