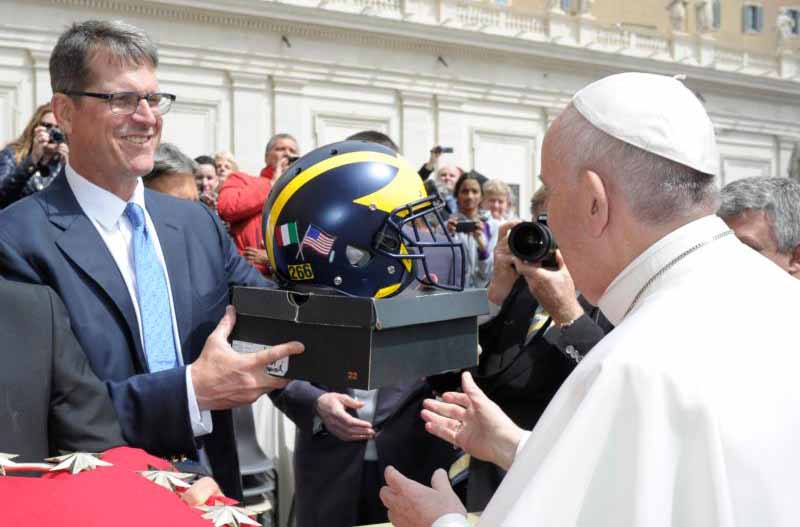 VATICAN CITY (CNS) — As someone accustomed to the stress of the gridiron, University of Michigan head football coach Jim Harbaugh said he was touched by Pope Francis’ peaceful presence.

“The way he talks is peaceful, it’s calm. It felt like this is what it would be like to meet Jesus Christ. That’s what it felt like to me. It was very emotional,” the coach told journalists April 26.

“I said, ‘Buenos dias, Santo Padre’ (‘Good morning, Holy Father’), and then my wife came in and told him that she loved him. He held her hand and prayed and asked that we pray for him,” Harbaugh recalled.

The coach and his wife presented the pope with a Michigan football helmet along with a pair of size-10 Air Jordan sneakers in the football team’s maize and blue colors.

Harbaugh said the pope smiled and graciously accepted the gifts, despite their unusual nature.

“I’m not sure the Holy Father knows a lot about ‘futbol americano,’ but he doesn’t need to. There’s a lot of distress, too, when you look into his eyes; there’s pain there. There’s so much injustice in the world, so much poverty and war and you can tell and feel that he feels that,” he said.

Also present at the audience were several of the 150 players and staff visiting Rome as part of their spring practice program April 22-30.

According to the press release by the university’s athletic department, the program was Harbaugh’s way of giving the team players “a major life experience, traveling to Rome to practice, but also to take part in social projects and offer them a look into a foreign country and culture.”

Speaking to journalists after the audience, Harbaugh said the experience was “more emotional than he anticipated,” and that meeting the pope gave him the chance “to live in a state of grace.”

“I’ve been trying to figure out what this experience means and what am I supposed to do with it. At least he gave me the marching orders to pray for him so I have that part of it down.”