Food in Scripture: A sign of God’s love and steadfastness 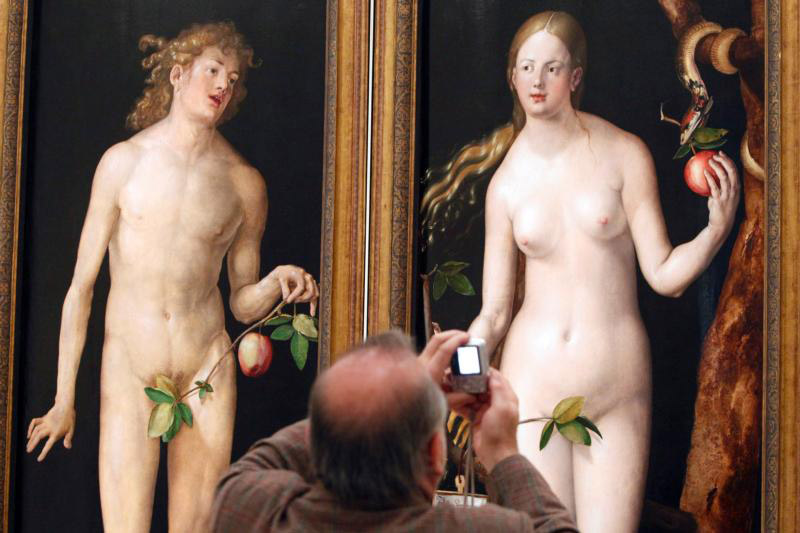 A man takes a picture of Albrecht Durer’s painting “Adam and Eve,” displayed at the Museo del Prado in Madrid, in this 2010 photo. In the Garden of Eden, God commanded Adam and Eve not to eat of the tree of the knowledge of good and evil. (CNS photo/Javier Lizon, EPA)

In disobeying this commandment — and seeking to be like God — Adam and Eve fell from grace and were expelled from the garden.

Adam and his children would forever toil for their food. When the Israelites escaped slavery in Egypt, and wandered the desert for 40 years, they became angry with God, worried they would starve. God let no such thing happen:

“I have heard the grumbling of the Israelites. Tell them: In the evening twilight you will eat meat, and in the morning you will have your fill of bread, and then you will know that I, the Lord, am your God” (Ex 16:12). As in the Garden of Eden, God provides food as a sign of his steadfastness and providential love.

We, too, are called to be hospitable. The Letter to the Hebrews states, “Do not neglect hospitality, for through it some have unknowingly entertained angels” (Heb 13:2).

Abraham entertained God in the guise of three men, telling them, “Now that you have come to your servant, let me bring you a little food, that you may refresh yourselves; and afterward you may go on your way” (Gn 18:5).

In being hospitable and charitable with our food and other blessings, we avoid avarice and gluttony. In giving of ourselves and our gifts, we are hospitable to the Lord.

It seems that any talk of food in Scripture is leading up to, and culminates in, the Eucharist as instituted by Jesus at the Last Supper. The Eucharist is a sacrament, which means it is more than a symbol — it enacts what it signifies.

It is spiritual food, and Jesus alludes to this when he says: “I am the bread of life; whoever comes to me will never hunger, and whoever believes in me will never thirst” (Jn 6:35).

The sharing of the meal, the eucharistic sacrifice, became so identified with Jesus that his disciples did not recognize him after the resurrection but in this act:

“While he was with them at table, he took bread, said the blessing, broke it, and gave it to them. With that their eyes were opened and they recognized him, but he vanished from their sight. … Then the two recounted what had taken place on the way and how he was made known to them in the breaking of the bread” (Lk 24:30-31, 35).

They finally recognize him — not just in the bread, but in the breaking of the bread, in the communal meal. This is the eucharistic sacrifice, shared in community as it was intended.

Food can be misused just as any earthly good can. It is not misused if we recognize it as a gift from God: an opportunity to be giving, to make sacrifice, to grow in holiness.

NEXT: When a Catholic foodie isn’t eating, he’s talking about eating