When a Catholic foodie isn’t eating, he’s talking about eating 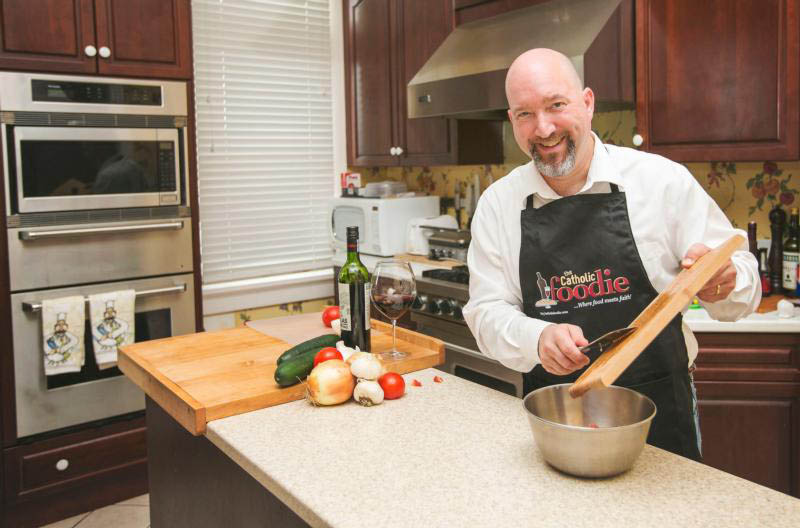 Jeff Young, founder and producer of “The Catholic Foodie” blog and podcast, is pictured in this 2014 photo preparing food in the rectory kitchen at St. Stephen’s Catholic Church in New Orleans. Young, whose blog mixes spiritual observations with recipes, also has a keen perspective about Catholics’ relationship to food. (CNS photo/courtesy Jeff Young)

Food culture is nothing new to Jeff Young, founder of the Catholic Foodie blog and podcast.

“I grew up in southeastern Louisiana. If we’re not eating, we’re talking about eating. That’s just the way it’s always been.”

Young, whose blog mixes spiritual observations with recipes, also has a keen perspective about Catholics’ relationship to food: “Food plays a very important role in salvation history, starting with the eating of the fruit from the tree of knowledge.

“It’s one of the most intimate acts you can have. It’s the prefigurement of the Eucharist and prefigurement of salvation. Every covenant in the Old Testament ended in a shared communal sacred meal.”

But beyond the theological message, Young says, “there’s something very, very important about sitting around a table. We open up to each other through food. There’s a shared intimacy there.

“It gives the best of who you are as human beings. It starts in Genesis from the very moment of the fruit of the truth, all the way to Revelation, and, we’re told, what are we preparing for? The feast of the lamb.”

Young recently wrote on his blog about a “mini-Passover” lamb chop dinner he shares with his wife and children every Holy Thursday before Mass: “This simple celebration has helped my family (and me) to better understand what happens at Mass and how awesome is the sacrifice and victory of Jesus for us.”

He’s also familiar with the lament of families that “we’re too busy for our own good.”

The solution, he thinks, is a return to Sunday dinners. “I’m trying to reinforce the importance of that shared time — that leisure time around the table, because we live in the world today that’s fast-food nation. Families hardly know each other.

“I think back to my childhood in the 1970s. My cousins, my aunts and uncles, we were all at my grandparents’ house, and that was everybody.” Young learned most of his culinary skills from his mother.

Food culture may have some aspects of religion, he thinks, but then it becomes a matter of how to direct one’s effort: “You can make something that’s really, really good, delicious and present it in just a way that’s beautiful, so your mouth is watering. A visceral reaction, you know? That’s power!

“And that’s what happens with these TV shows and celebrity chefs. There’s nothing new under the sun. It’s all a play on something else. There are no really new recipes.”

In addition to his blog, Young hosts a daily program on BroadboxMedia.com and co-hosts “Around the Table Food Show” on Catholic Community Radio in New Orleans and Baton Rouge.

“What a wonderful opportunity to evangelize. To meet people where they are. And if they’re fascinated by food, if they don’t know how to cook but would like to learn how, why not meet them right there. And slowly, over time, in little-bitty bites along the way, it may make an impact in their lives.”

Young’s recipe for his “mini-Passover” lamb chop dinner is available on his blog, CatholicFoodie.com.

PREVIOUS: Food in Scripture: A sign of God’s love and steadfastness

NEXT: A seat at the table of the Lord