St. John Paul II and Our Lady of Fatima 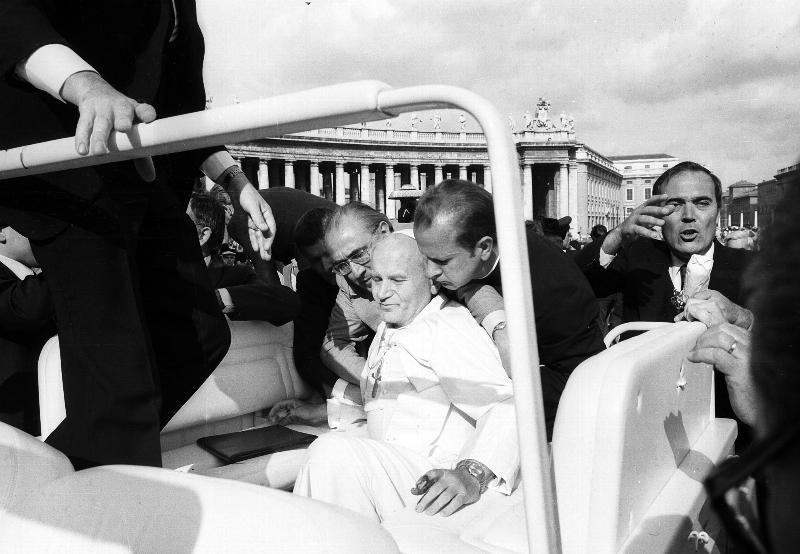 St. John Paul II is assisted by aides after being shot in St. Peter’s Square May 13, 1981, as he rode in an open jeep greeting pilgrims on the feast of Our Lady of Fatima. St. John Paul credited his miraculous survival to Our Lady of Fatima, to whom he had an ardent devotion. (CNS photo/L’Osservatore Romano)

The first is the 100th anniversary of apparitions of Mary to three shepherd children in Fatima, Portugal. On May 13, 1917, Mary appeared to the children, bearing the message of her son and pointing to the dire need for conversion of sinners.

Mary appeared six times to the children, eventually revealing the “Secret of Fatima,” of which there were three parts that were to be made known at an appointed time.

The second anniversary is directly related to the first. May 13, 2017, marks the 36th anniversary of the assassination attempt on St. John Paul II. On that day in 1981, St. John Paul was proceeding with his weekly tour of St. Peter’s Square when four shots were fired out of the crowd.

The would-be assassin was Mehmet Ali Agca, a Turkish national who had traveled across Europe before finally entering Rome.

Two bullets hit the pope, and he began bleeding badly. He was rushed to the hospital where he required a 5 1/2 hour surgery to repair damage to his abdomen. Fortunately, no vital organs had been hit.

A year after the attack, St. John Paul placed a bullet fragment from the attack in the crown of Our Lady of Fatima in Portugal.

St. John Paul credited his miraculous survival to Our Lady of Fatima, to whom he had an ardent devotion. He later said he felt it was a “mother’s hand that guided the bullet’s path.” While in recovery, the pope requested that the Fatima archives be brought to him for examination.

St. John Paul traveled to Fatima three times during his pontificate: in 1982, a year after the assassination attempt; in 1991, on the 10th anniversary of the attempt; and in 2000 during the Jubilee Year. On his final visit — May 13, 2000 — the pope beatified Francisco and Jacinta, two of the shepherd children. In his homily during the Mass he said:

“The message of Fatima is a call to conversion. … In her motherly concern, the Blessed Virgin came here to Fatima to ask men and women ‘to stop offending God, Our Lord, who is already very offended.’ It is a mother’s sorrow that compels her to speak; the destiny of her children is at stake.

On June 26, 2000, the Vatican formally released the third secret of Fatima, publishing “The Message of Fatima,” including a photocopy of the text from Carmelite Sister Lucia dos Santos, the remaining survivor of the three children who saw Mary at Fatima in 1917.

Celebrating the 100th anniversary of Fatima is, in a way, also the celebration of St. John Paul’s survival of an assassination attempt and the subsequent revelation of the third part of the Fatima secret. The message was pertinent in 1917 and even more pertinent in 2017.

Fenelon is a freelance writer from Milwaukee — visit her website here.

PREVIOUS: Men born out of wedlock can still be ordained priests

NEXT: Visiting, and living with, Our Lady of Fatima