Visiting, and living with, Our Lady of Fatima 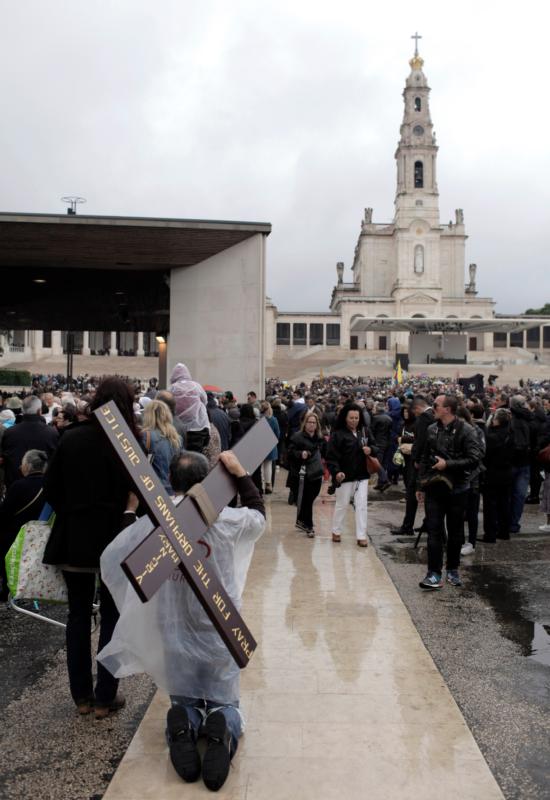 A man carrying a cross walks on his knees May 13, 2016, at the Marian shrine of Fatima in central Portugal, where pilgrims pay homage to the apparitions of Mary to three shepherd children, Lucia dos Santos and her cousins, Francisco and Jacinta Marto. (CNS photo/Paulo Cunha, EPA)

“I get emotional very easily,” admits Marina Yap with a smile, “especially when I’m thinking about Our Lady of Fatima. Like right now.”

A native of the Philippines, Marina has adopted Our Lady of Fatima as her personal patron. In her home chapel in North Hollywood, California, she keeps a 42-inch, beautifully decorated statue of Our Lady of Fatima, alongside an image of the resurrected Christ.

“Every time I look at Our Lady,” says Marina, “it makes me cry because I’m so filled with love for our Blessed Mother, what she stands for, and what she wants for us.”

Indeed, Mary’s message of peace, prayer and conversion have inspired Marina to form a prayer group devoted to promoting Our Lady of Fatima. She and her husband Michael also are members of the World Apostolate of Fatima’s diocesan board in the Archdiocese of Los Angeles.

And in April 2016, Marina and Michael visited Fatima for the first time.

“I had recently been laid off from my restaurant job,” she says softly, “so it was the perfect time for me and Michael to go.”

At the Shrine of Fatima, they visited the Chapel of the Apparitions, filled with hundreds of pilgrims, and Marina was invited to lead five Hail Marys in Tagalog. “That was overwhelming,” she says, her voice trembling at the memory. “So many people were there, and I was chosen. It was such an honor.”

The following day the Yaps visited the Basilica of Our Lady of the Rosary of Fatima, built on the site where Mary first appeared to Lucia dos Santos and her cousins, Blesseds Jacinta and Francisco Marto.

“It was a quieter setting with not as many people,” Marina says. “And my tears never stopped falling, because all I could think of was, ‘She’s embracing me, she’s holding me … she loves me.’ I know I will be coming back.”

Carl Malburg, on the other hand, has visited Fatima three times, but has yet to experience what he calls “that magical, ‘wow’ moment.” But that doesn’t mean he isn’t devoted to Our Lady.

“She’s with me all the time,” grins the 75-year-old resident of Munster, Indiana, who — as custodian of the International Pilgrim Virgin Statue — spends a good part of each year (from 100 to 200 days) traveling with Our Lady of Fatima, visiting parishes and other sites around the U.S. (and beyond).

Fortunately, Carl’s wife Rose Marie understands, since she is president of the organization that coordinates appearances of the 40-inch, mahogany statue. The statue often occupies the seat next to Carl on airplanes and, not surprisingly, draws attention from Catholics and non-Catholics, from believers and non-believers alike.

The biggest challenge, Carl notes, is addressing the suggestion that Fatima constitutes a “cult” or “fringe” element of Catholic belief.

“Our Lady is not spreading a new Gospel,” he says. “She’s simply a mother trying to help us all understand the message of the Gospel and follow the commandments.

“It’s about closer communication with God. People in heaven — family members, saints and certainly the Blessed Mother — can hear our concerns, and we can call on them for help. That’s something we profess in our creed every week — the resurrection of the dead, the communion of saints and the life of the world to come. It’s very much a part of our faith.”

And to those who remain skeptical, Marina Yap offers this suggestion. “Just be open,” she says, “because there will come a time when Our Lady will come knocking at your heart.”

PREVIOUS: St. John Paul II and Our Lady of Fatima

NEXT: A brief history of Our Lady of Fatima