The meaning of Our Lady of Fatima after 100 years 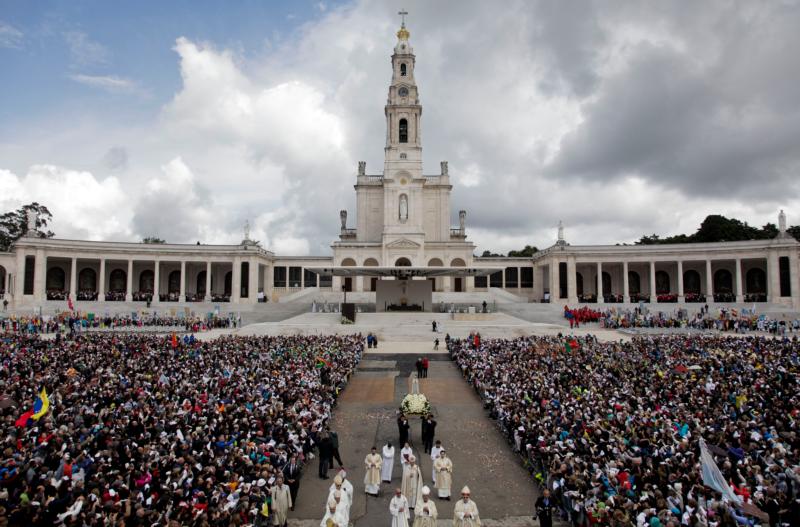 A statue of Our Lady of Fatima is carried through a crowd in 2016 at the Marian shrine of Fatima in central Portugal, where Pope Francis plans to visit May 12-13 to celebrate the 100th anniversary of the 1917 apparitions of Mary. While tending sheep in a field, Lucia dos Santos and her two younger cousins, Francisco and Jacinta Marto, reported seeing a woman dressed all in white, “more brilliant than the sun, shedding rays of light clearer and stronger than a crystal glass filled with the most sparkling water and pierced by the burning rays of the sun.” (CNS photo/Paulo Chunho, EPA)

This year the Catholic Church celebrates the 100-year anniversary of the Marian apparitions at Fatima, Portugal, witnessed by three shepherd children who reported that they saw visions of Mary beginning on May 13, 1917.

Whatever the significance of the Fatima apparitions is for each us personally, this 100-year anniversary of the apparitions is a reminder of the central message of the Gospels, calling everyone to conversion and bringing us closer to Christ.

Explore this package of resources on the Fatima centenary observance from our partner Catholic News Service.

A brief history of Our Lady of Fatima
The apparitions of Mary at Fatima, witnessed by three shepherd children, began on May 13, 1917 and then again on the 13th day of five subsequent months. They were declared “worthy of belief” in 1930.

Visiting, and living with, Our Lady of Fatima
Catholics in America maintain a strong devotion to Mary under the title of Our Lady of Fatima because she and the dearly departed pray for us and help us follow the Gospel.

St. John Paul II and Our Lady of Fatima
The saintly pope credited his survival of an assassination attempt to Mary — on the very day 64 years after the first apparition of our Lady in Fatima. He said it was a “mother’s hand that guided the bullet’s path.”

PREVIOUS: A brief history of Our Lady of Fatima

NEXT: Fatima and Mother’s Day: Time to reflect on relationship with Mary