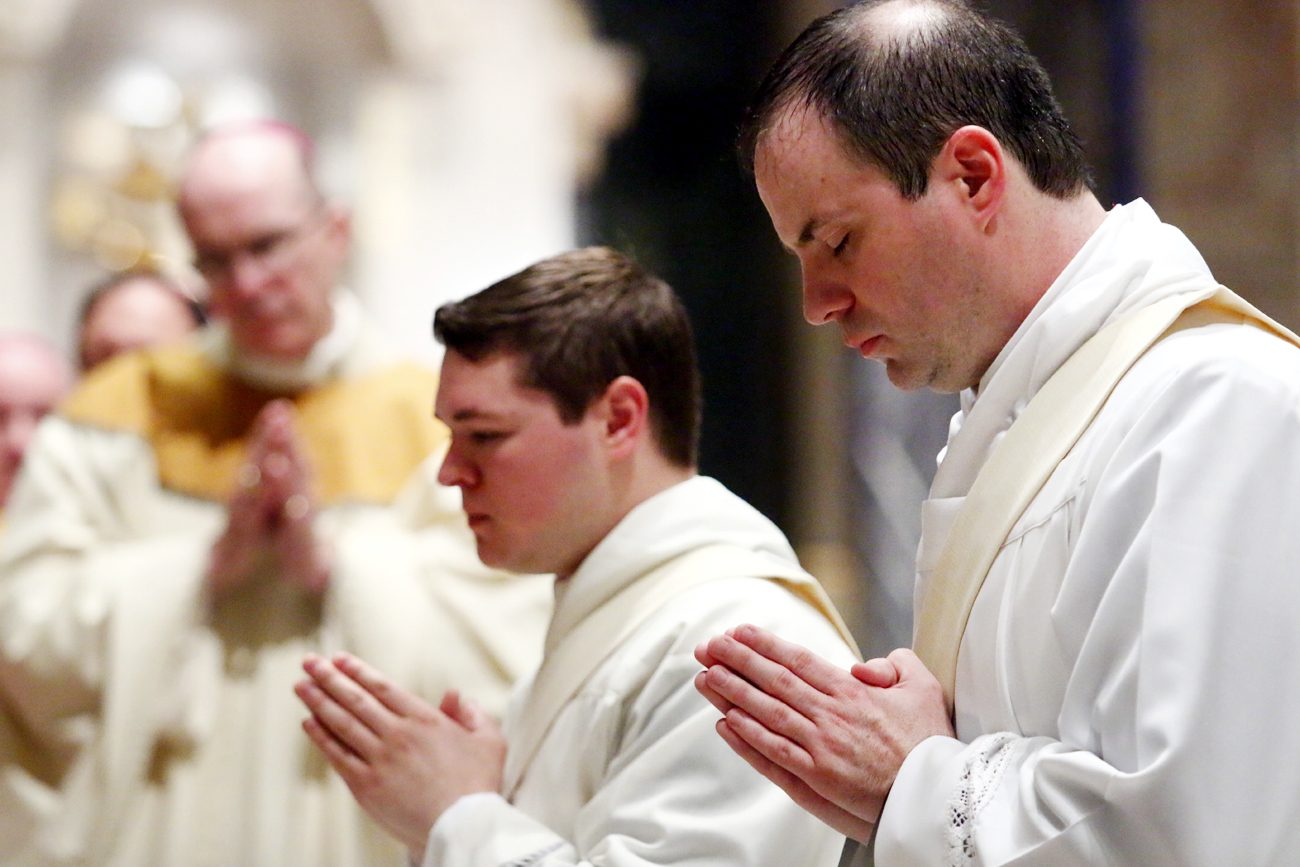 The new priests, Fathers Brian Connolly (right) and Matthew Brody, pray during the ordination rite May 20 in the Cathedral Basilica of SS. Peter and Paul. (Sarah Webb) 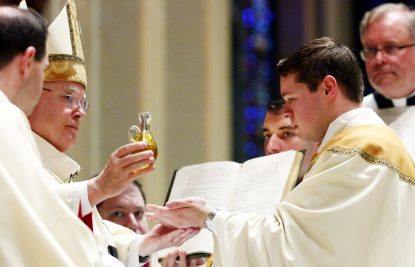 Archbishop Chaput pours the oil of sacred chrism into the hands of Father Matthew Brody.

On Saturday morning, May 20, in one of the most solemn but nevertheless joyous rituals of the Catholic Church, Deacons Matthew Brody and Brian Connolly were ordained priests by Archbishop Charles Chaput in the Cathedral Basilica of SS. Peter and Paul.

Joining Archbishop Chaput at the Mass were Bishop Timothy Senior, the rector of St. Charles Borromeo Seminary, and the other active auxiliary bishops of Philadelphia including Bishop John McIntyre, Bishop Michael Fitzgerald and Bishop Edward Deliman.

Also, Bishop-elect Ned Shlesinger for the Diocese of Raleigh, who is a former St. Charles professor. Rounding out the clergy in the sanctuary was the usual large representation of the priests of the archdiocese.

The most distinguished guests in the front pews were Jack and Connie Connolly and James and Karen Brody, the parents of Philadelphia’s two newest priests, along with grandparents, brothers and sisters, uncles, aunts, cousins and others who encountered and encouraged them along the way.

(See a photo gallery of the ordination Mass here.)

Present too was virtually the entire student body of St. Charles Seminary, perhaps anticipating the day in God’s good time that they themselves would be in the sanctuary for the rite of ordination.

Archbishop Chaput’s homily centered on the chosen readings for the Mass, beginning with the account in the Book of Numbers in which the Israelites wandered in the desert on their 30-year circuitous journey to the Promised Land. Moses, faced with their perhaps understandably bitter grumbling, complained to God, “Why are you so displeased with me that you burden me with these people?”

God took pity on him, and directed him to choose 70 men from among the elders who could be true leaders and share the burden, really precursors for today’s deacons and priests of the church. 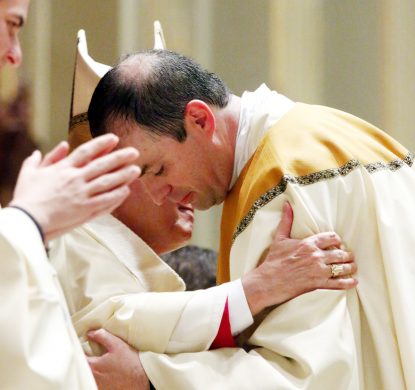 “We see one another as brothers sharing the burden,” Archbishop Chaput said.

The second reading was from St. Paul to the Romans, which speaks of the one body of the church. There are many parts but all the parts do not have the same function.

Speaking of the role of the laity, the archbishop said, “The Body of Christ is something we share in common; you have your own responsibility.”

Sometimes the elaborate ceremony of an ordination might give an impression it is the most important of the sacraments, but it is not, the archbishop said. “The most important sacrament is baptism, not holy orders. All of us in the church are equal. We are equally brothers and sisters to one another.”

The final reading was from the Gospel of John, ending with the words, “Whoever serves me must follow me and where I am there also my servant will be. The Father will honor whoever serves me.”

Again, the archbishop reminded the congregation we all have a role if not the same one.

Prior to the actual administration of the sacrament there was the always impressive litany of supplication in which the candidates lay prostrate on the sanctuary floor while the choir implored the intercession of the saints on behalf of those to be ordained.

This was followed by the laying of hands on the candidates and the prayer of ordination by the archbishop, the two essential parts of the sacrament. Afterwards the priests in the sanctuary, in a sign of unity, also laid their hands in prayer on their two newest brothers.

Fathers Brody and Connolly then joined Archbishop Chaput at the altar for the celebration of the Liturgy of the Eucharist.

From a layman’s point of view the thunderous Litany of the Saints is perhaps the most impressive element, as the blessings and graces of the communion of saints are literally hurled on the prostrate candidates.

Interestingly, afterwards both Father Brody and Father Connolly agreed for them the most impressive part was the laying of hands one by one by the multitude of their now-brothers in the priesthood.

“It was humbling, beautiful,” Father Connolly said. “As they passed, each and every one was so deliberate. It was the dedication of the priests and their passing it on.”

“It was really beginning to unfold (and) it was wonderful,” Father Brody said. “They were telling us we were joining their ranks and they were passing it on.”

While this was the smallest ordination class since 1835, there are signs of change.

Seated on the opposite side of the cathedral from the seminarians in cassocks and surplices was another knot of young men in suits and ties who may represent the future of St. Charles Seminary.

“We have about 16 men considering entering; three have been accepted for the seminary and five or six interested for next year and a lot more after that,” said Father Stephen DeLacy, the director of the Office for Vocations to the Diocesan Priesthood. “We are going in the right direction and the number of those discerning is definitely higher.”

Ordination Day will remain an annual celebration at the Cathedral Basilica of SS. Peter and Paul for untold years to come.