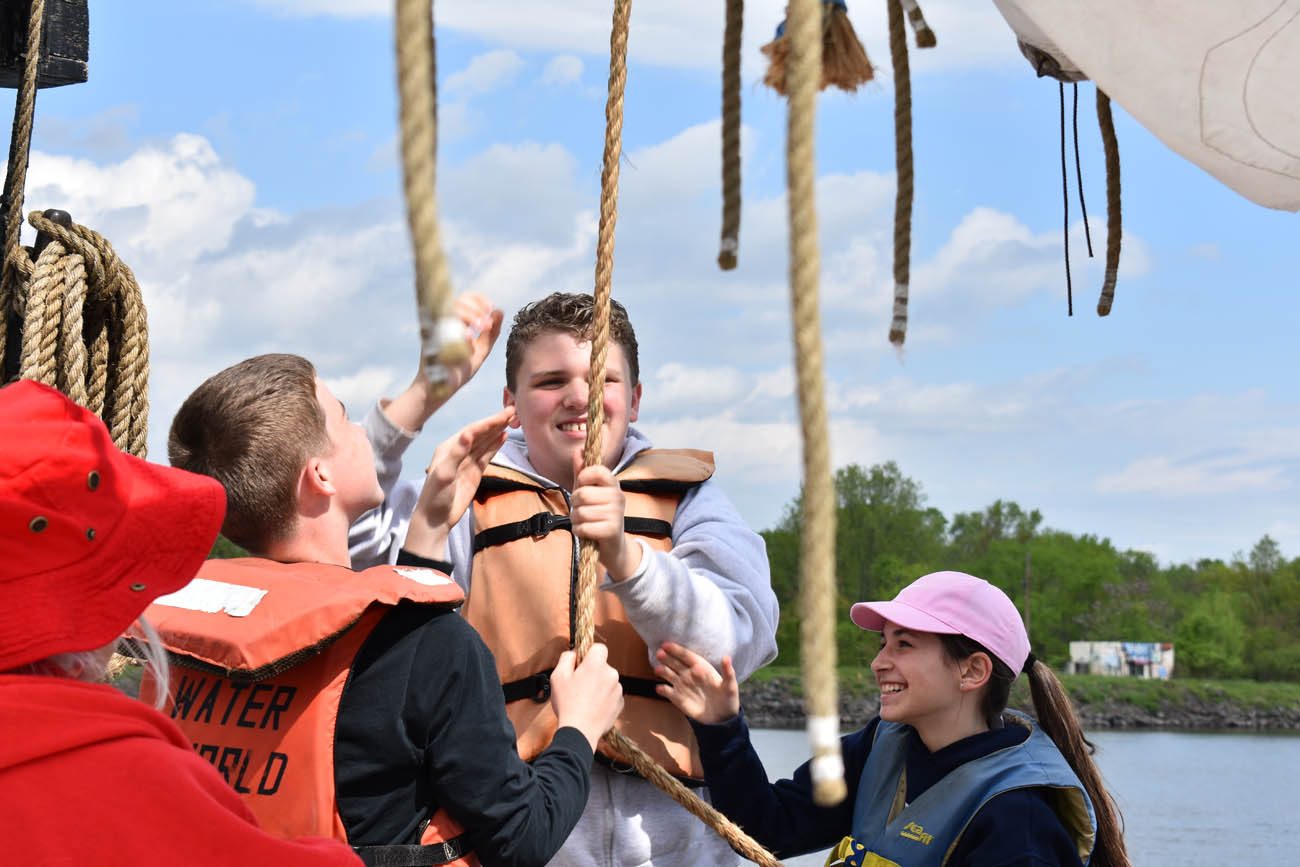 Eighth grade students of St. Mark School in Bristol man the ropes on their education field trip May 2 aboard the tall ship A.J. Meerwald. (Photo by Bridget Shaw) 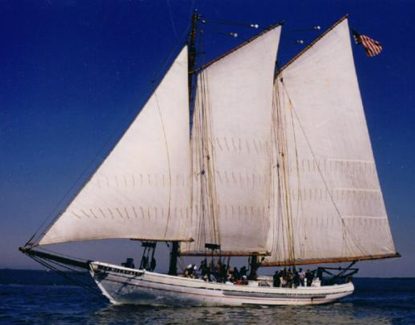 Launched in 1928 as an oyster schooner and restored in 1995 as an educational sailing ship, the A.J. Meerwald is New Jersey’s official tall ship whose home port is Bivalve, Commercial Township, N.J.

St. Mark School in Bristol Borough sits on the Delaware River. Its students get to spend their recess time watching little boats and big ships sail by. Even a furtive glance out the window reveals the lush greenery of Burlington Island and, on occasion, the critters that fly or scuttle around its banks.

On Tuesday, May 2 the eighth grade class experienced the waterway from a tall ship as a kind of bon voyage to the school they’ll leave behind after graduation on June 14.

The adventure was part river cruise, part classroom for lessons on the environment. And there were no complaints about the fact that the travelers had to work for this special class trip.

Before the A.J. Meerwald, a restored oyster fishing boat, sailed the dock in Burlington City, the kids morphed from teenagers looking forward to a good time to able-bodied sailors, calling out commands, raising sails and hauling lines, all under the guidance of the Meerwald’s crew.

The 85-foot-long two-masted schooner got underway with the order called out to “drop the lines” and the classroom under the sun and over the water began. The crew members who doubled as educators divided the 23 students into three groups and began teaching their charges about the delicate balance between nature and the environment, and how humans affect everything from trees to the tiniest of creatures that hide in the wetlands.

In the water chemistry category, the students conducted tests for pH levels in bodies of water, learning that too high or too low levels can determine whether marine life can survive. One indicator was reflected in the watery habitat of frogs.

“Frogs can breathe through their skin as well as their lungs so if you see a lot of frogs, the water is clean,” said Joshua Scornavacchi, sailor and teacher. He added that bullfrogs are the exception to that barometer because “they can live in anything.”

The participants handled tiny animals and native plants so they could appreciate the fragility of the natural life that comprises their environment. They learned how trash, oil spills, automobile exhaust and other land-based pollutants can seep into the rivers, canals and oceans and have a detrimental effect on nature.

One important lesson for Lia Caucci, based on the pH test she and her classmates conducted on board, was the realization of how dirty the water is. Given the opportunity, she would urge her fellow schoolmates to recycle more and properly dispose of trash.

“We should care about the environment because all that pollution goes into what we eat and drink and breathe,” Lia said.

A burst of excitement halted lessons as the Meerwald sailed past the St. Mark schoolyard, where the schoolmates left behind lined the playground fence to wave and cheer the shipmates. Chants of “We are St. Mark, couldn’t be prouder; if you can’t hear us, we’ll shout a little louder,” echoed back and forth between the young sailors and the kids at recess.

Distance kept the chants faint but parents who stood near the school were armed with cameras and, in no time, images of the ship and its passengers lit up Facebook.

Father Dennis Mooney, pastor of St. Mark, credited Bridget Shaw, the school’s technology teacher; Principal Maria Sanson, and eighth-grade teacher Amy Del Rossi with coming up with the idea for what they said was the kids’ final salute before graduation.

“The trip was a good experience for the kids and gives them the chance to learn about the river and its surroundings,” said Father Mooney. “It’s also a good way to promote St. Mark School.”

Sanson said the cruise was a unique opportunity for the students to experience life beyond books, a vital element to add to their Earth Science education.

Student Tara Girton said that going to a school on the river was a calming experience while doing schoolwork.

“You can just look outside to see the river and all the waves and the island across the river, and you can hear the seagulls. The trip was like seeing in real time what we read about in our books,” said Tara, who got her first look at a bald eagle as it flew over the bow of the Meerwald.

Mary LaRosa lives near the river and it’s always been a part of her life. Her favorite part of the trip was learning to sail. She also liked the view from the river, which showed off the backs of the big houses that line the river.  It was fun, she said, to experience the cruise with the whole class and seeing the rest of the student body on shore waving as the ship passed by.

“Those were kids you see every day in school and it was fun to see them all come out and cheer for us,” Mary said.

The importance of conservation was brought home to Brianna Myers after a pH test showed the poor health of the water.

“We should recycle more and be careful with trash because pollution can harm the fish and marine plants,” she said.

Three hours after castoff, the Meerwald returned to port and its passengers filed off the ship and onto a school bus for the trip back to Bristol. They all considered the trip a success. Even their teacher and principal gave the adventure a good grade.

“I give this trip an A+ because I had no idea the crew would take so much time to educate these kids on environmental issues,” Sanson said.

The A.J. Meerwald is a Delaware Bay oyster schooner, built in 1928, when oyster trolling was a competitive and lucrative business. During World War II, the U.S. Coast Guard commandeered the Meerwald to serve as a firefighting ship.

After the war it served briefly as a vessel for clam fishing. It fell into disrepair and was later purchased and restored. 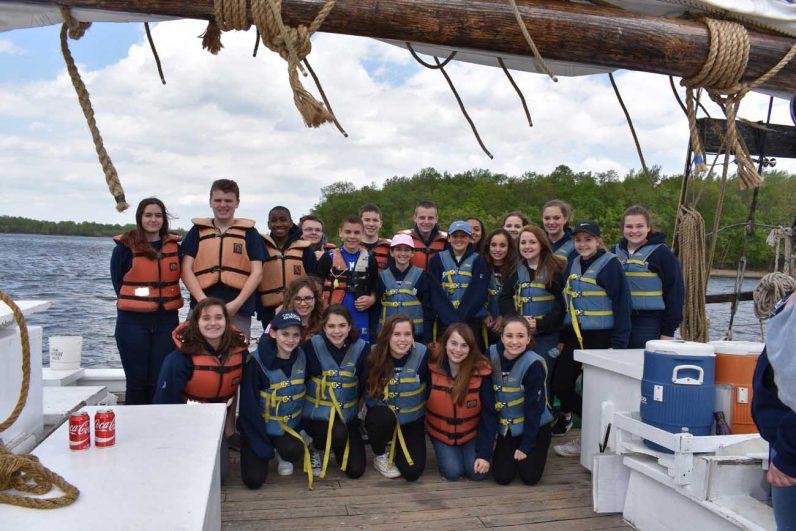 The graduating class of St. Mark School poses for a photo aboard New Jersey’s official tall ship, the A.J. Meerwald, May 2 on the Delaware River. As they sailed by St. Mark School, which is located by the river, they were cheered on by their schoolmates in the schoolyard. (Photo by Bridget Shaw)