Dads teach best through their example, reliance on Christ 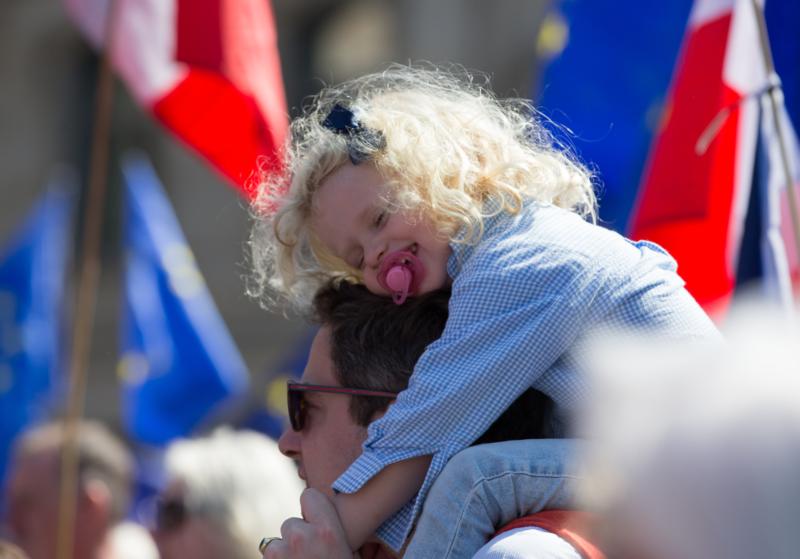 A girl smiles while sitting on the shoulders of her father April 9 in Goetheplatz Square in Frankfurt, Germany. As with any vocation, fatherhood is fundamentally not about the father himself, but about how he relates to others: as protector, defender and sanctifier of his family. (CNS photo/Alexander Becher, EPA)

Fatherhood is a divine gift that too often goes unrecognized and unremarked upon. It is a vocation of love and a complete giving of self. As with any vocation, fatherhood is fundamentally not about the father himself, but about how he relates to others: as protector, defender and sanctifier of his family.

In recent years, there has been an increased focus on the importance of the vocation of fatherhood. With role models such as St. Joseph, St. Louis Martin (father of St. Therese of Lisieux) and, above all, God, our heavenly father, it is clear that fatherhood must flow from a place of deep spirituality.

Deacon Harold Burke-Sivers is a writer and speaker who travels all over the world — all while being a devoted husband and father of four children. Born in Barbados, Deacon Burke-Sivers grew up in Newark, New Jersey, and now lives in Portland, Oregon.

His personal experience of fatherhood has had a dramatic impact on the way that he fathers, and how he relates to God as his father.

“Having grown up with a father who was not by any stretch of the imagination the ideal father, I had no model for what that was supposed to look like,” Deacon Burke-Sivers said.

As a result, the other men in his life — including the Benedictine monks at his high school — St. Benedict’s Preparatory School in Newark — and especially St. John Paul II — took the place of his father, spiritually. His idea of fatherhood became inseparable from the Catholic faith.

“God allows men to borrow his sacred name ‘father,’ for the brief time we are here on earth,” he said. “There are responsibilities that come with that, and God has shown us, through his son, how to be a father. I try to model that same fatherhood in my own family, to serve, protect and defend.”

For Deacon Burke-Sivers, those are three key words for fatherhood. “Jesus said, ‘I come not to be served, but to serve.’ So I think of that model of self-sacrifice, modeled by Christ, but lived out in a spirit of fatherhood by St. Joseph, who faithfully followed everything that God asked of him as a father,” he said. “That is our model as fathers.”

Sam Guzman is the founder and editor of The Catholic Gentleman, a blog that “exists to inspire men to holiness — to love God, to serve others and to deny self. And to do it all with class and manly flair,” according to the website.

A husband and father of three children living in the Oklahoma Ozarks, Guzman often writes about the vocation of fatherhood.

“As a father, my vocation is to teach, guide and nurture the lives of my children so that they can grow into men and women of virtue who love and serve God and their neighbor,” he said.

The way fathers teach their children is important, Guzman said. “Most of all, fatherhood involves ‘imaging’ holiness to my children. While I can say all the right things to them and catechize them, the best catechesis is the way I live as a man.”

The spiritual life of the father can have a profound impact on the household, and particularly on the children themselves. “As a father,” Guzman said, “I must strive for holiness, pray and model love for God above all things. If I do not, all my catechesis and instruction will simply ring hollow.”

Since becoming a father, Guzman has discovered the power of mercy and grace more profoundly. “It can be a powerful way to teach children deeper lessons than simply trying to control their behavior,” he said.

As a parent, he has found greater insight from more frequent seeking of God’s mercy. “Receiving his mercy teaches us to be more merciful to our children.

“May we as parents give as much mercy to our children as we hope to receive from our heavenly Father!”

PREVIOUS: Of all the fathers in the Bible, St. Joseph stands out

NEXT: Like any vocation, fatherhood is tough, fulfilling and a mystery