Of all the fathers in the Bible, St. Joseph stands out 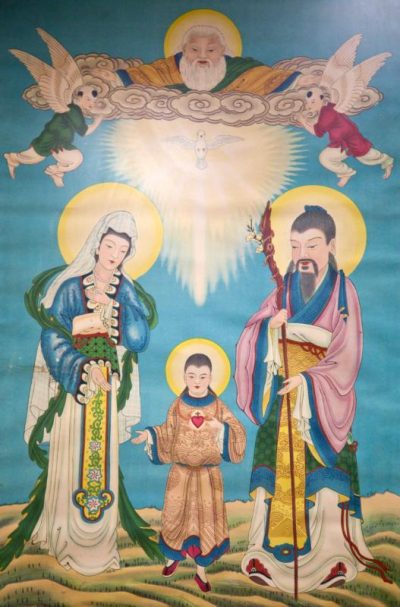 In his Letter to the Ephesians, St. Paul said that he knelt “before the Father from whom every family in heaven and on earth is named” (Eph 3:14-15).

No father can live this calling out completely on this side of heaven. But with the help of God’s grace, they can improve in their life of love and service to their families from day to day.

The question is, Do they cooperate with God’s grace or turn away from it?

The Bible gives us examples of what can happen in both instances.

The account in Genesis of Adam and Eve’s fall from grace, in what Catholic tradition has called original sin, is immediately followed by the story of Cain and Abel, their two sons. In a fit of anger and dejection, Cain killed Abel.

Before their sin, Adam and Eve had more than enough of God’s grace to live out their calling as spouses and parents in perfect harmony just as God had planned.

But they rejected that grace in their choice to sin. Division and hardship came in its place. One of the first of the continuing effects of original sin was seen in Cain striking down Abel.

All of us were born into the brokenness of original sin. Adam and Eve took it on by choice. Parents experience the sad effects of their own imperfections in their children in many ways.

Adam and Eve saw this in the murder of Abel by Cain, the devastation of which has been dramatically portrayed by many artists over the centuries.

In the second century, St. Irenaeus described Mary as the “new Eve,” undoing by her “yes” to God what was done in Eve’s “no.”

If Mary was the new Eve, St. Joseph can in a sense be considered a new Adam in anticipation of Jesus, whom St. Paul described as “the last Adam” (1 Cor 15:45).

Unlike Adam, who rejected God’s commands to him, Joseph is described as being “a righteous man,” one who obeys God’s law as given through Moses (Mt 1:19).

And when God gave Joseph specific commands through angels, first to accept Mary as his wife, then to take her and the Christ Child into Egypt and finally to return with them to Israel, he is portrayed in all three moments as instantly obeying.

Joseph’s faithfulness to his calling of caring for the Holy Family continued in the life he shared with them in Nazareth.

Our heavenly Father gives all human fathers responsibility for their children. This has been seen in many cultures as an exalted position of authority.

But fathers who are also disciples of Christ lead their children to God most effectively by humbly following the example of St. Joseph in being faithful to God’s will.

Gallagher reports for The Criterion, newspaper of the Archdiocese of Indianapolis.

PREVIOUS: On the journey of life, Jesus leads and feeds us

NEXT: Dads teach best through their example, reliance on Christ