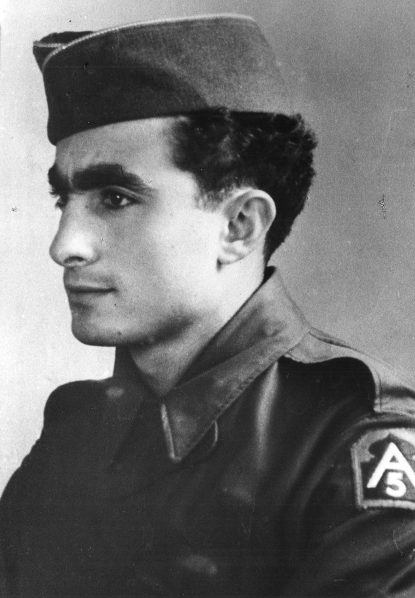 It is no accident that many films shown on television between Memorial Day and D-Day the following week (June 6) center around World War II. After all, with more than 16 million men and women under arms, it was easily the largest and deadliest war ever fought by the United States.

Only a tiny percent of them are still alive, and one of them is a Catholic bishop — Bishop Louis A. DeSimone, 95, a retired auxiliary bishop of Philadelphia. (One other is the retired bishop of Corpus Christi, Texas, Bishop Rene Gracida.)

Back in 1944 he was Sgt. Louis DeSimone, a 22-year-old translator of Italian attached to the headquarters of the U.S. Fifth Army. Joining it in Casablanca during the African campaign and continuing through Sicily, up the Italian boot to Monte Cassino and after that to the deadly Anzio beach landing, he arrived in Rome a few days after the bloodless liberation of the Italian capital.

He could not know it immediately, but this last event would affect his entire life.

Bishop DeSimone minimizes his wartime exploits by explaining he was not a frontline infantryman, he was part of the support staff. Although the lightweight carbine he shouldered was a peashooter compared to the infantryman’s M1 rifle, the young sergeant was definitely in harm’s way, just a step or two behind the action. He saw things he would rather forget.

Born in 1922 in Bridgeport, Montgomery County, Bishop DeSimone is the eldest and last surviving of three brothers, all of whom became priests. He graduated from Bridgeport High School and continued on to then-Villanova College. The thought of the priesthood was on his mind but he wasn’t quite sure at the time.

It was while he was at Villanova that America entered World War II. A military recruiter came to the campus and offered the students a deal. They could enlist in whatever branch they wished to serve in but stay in school until there was a need for them.

“I chose the army because my father (Anthony DeSimone) was an American soldier in France during World War I,” Bishop DeSimone said.  “I wasn’t sorry to go in, I wanted to serve my country.”

He was just one semester shy of graduation when the recruiters came back and told him it was time. The reason became clear later. There was a need for young men who could speak Italian fluently because the invasion of Italy was on the drawing board. 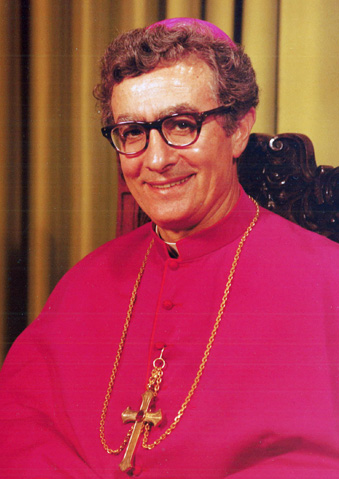 Bishop Louis A. DeSimone at his episcopal ordination in August 1981.

After his stateside training, which was the only time he actually fired a gun, he was shipped off to Casablanca, where he was assigned to Fifth Army headquarters as a translator. He worked mostly under the chief chaplain, Major John Ryan, who was a Catholic priest.

Sgt. DeSimone’s task would be smoothing communications with the local population and sometimes finding a priest who could celebrate Mass for the troops or refugees. He also worked on occasion as an interpreter for other officers including Generals Mark Cark and Alfred Gruenther, the top brass in the Fifth Army.

After leaving Casablanca in summer 1943 the first stop across the Mediterranean was Sicily and after that up through southern Italy with hard fighting all the way.

As the Fifth Army worked its way north, Bishop DeSimone especially remembers the swarm of planes thick as locusts on their way to bomb Monte Cassino.

By this time the Mussolini government had fallen and most of Italy was occupied by the German Army units including those that were firmly entrenched around the historic abbey. 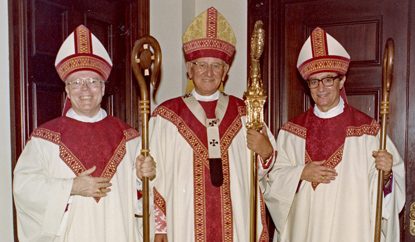 There were Italian officers who had come to over to the Allies, Bishop DeSimone recalls, and they advised against the bombing because the occupying Germans were in caverns under the Abbey unreachable by the bombs. But it was bombed anyway.

By the time Sgt. DeSimone arrived at the scene the fighting had moved on but the Abbey was just rubble.

“It was mostly people from the town who came up to the Abbey for protection that died,” Bishop DeSimone said.

He also recalls the deadly battle for Anzio not far from Rome, which began on Jan. 22, 1944 where the Allied forces made a surprise beachhead landing. While successful in the end, more American soldiers died in a single day in that battle than any other of the war.

Through it all, “You could not miss the horror, not only the military deaths but the starving people. It was an unbelievable experience,” said Bishop DeSimone.

He went ashore after the heavy fighting from a LST (the flat-bottomed landing craft in use at that time) just after the worst fighting.

While in the area he happened upon a local cemetery. Trucks were pulling up and literally dumping the bodies or body parts on the ground, where burial crews wearing masks were sorting them out by nationality, for interment. 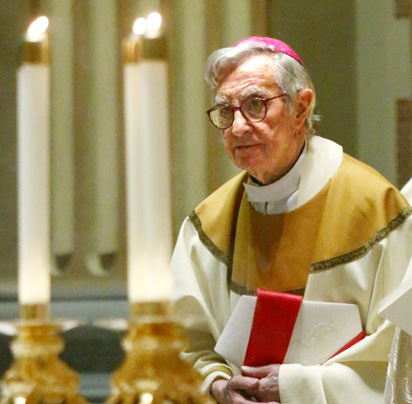 After an Allied breakthrough near Rome the German high command made the decision not to defend the city and retreated, leaving it almost intact. A contingent of the Fifth Army entered it June 5, 1944, and Bishop DeSimone recalls when he arrived two or three days later, the crowds were still cheering and blowing kisses to the American soldiers.

One of his first tasks was to accompany Chaplain Ryan to Vatican City, a neutral party during the war, but with its great plaza blocked off by a high wooden wall. Here they met with Vatican City’s president, Cardinal Nicola Canali, and arranged for a victory Mass to be celebrated at Santa Maria Della Angeli, a huge church built on the ancient ruins of the Baths of Diocletian.

There were also several audiences for the troops attended by Pope Pius XII. A particular one stands out in Bishop DeSimone’s mind because he was given a front seat as an Italian speaker; most people didn’t realize the pope himself spoke very good English.

Pope Pius went down the line giving the individual soldiers a warm greeting and asking them what they did in civilian life.

“When he came to me and grabbed my hand, I told him I was thinking of becoming a priest,” Bishop DeSimone recalls. Pope Pius replied, “I’ll pray for you.” Right then and there Sgt. DeSimone decided yes, he would be a priest.

“I used that in my letter of application to St. Charles Seminary,” he said. “I think that’s what got me in.” It also helped that while in Rome he met Msgr. (later Cardinal) Francis Brennan, a Philadelphia priest and Vatican official who opted to remain in Vatican City during the war.

He was delighted to meet another Philadelphian and when Sgt. DeSimone told him he wanted to enter St. Charles Seminary, Msgr. Brennan told him the seminary rector, Msgr. Vincent Burns, was a friend of his. “Tell him I recommended you,” he advised.

Back in those days when St. Charles had 500 seminarians, as many as it could hold, desire to enter wasn’t enough. Recommendations were important.

But after he got home Sgt. DeSimone did apply and was accepted, and he credits the prayers of Pius XII and Msgr. Brennan’s endorsement for clearing the way.

Louis A. DeSimone was ordained to the priesthood by Archbishop John F. O’Hara on May 10, 1952. His was the only Italian surname among the 29 priests ordained for the archdiocese that year, according to the lists in the St. Charles Seminary histories.

He went on to a distinguished career rising to the rank of bishop in 1981 and finally retiring in 1995.

Of the many wonderful events in his life, and of all of the distinguished people he encountered, it is that brief conversation with Pope Pius XII, after which he said yes to the Lord, that is the most unforgettable.

He well knows that just because he carried a carbine and didn’t fire a machine gun, he very easily could have been killed at almost any time on that long journey through Sicily and Italy to Rome. He wasn’t, and he thanks God for this and for every blessing that followed.