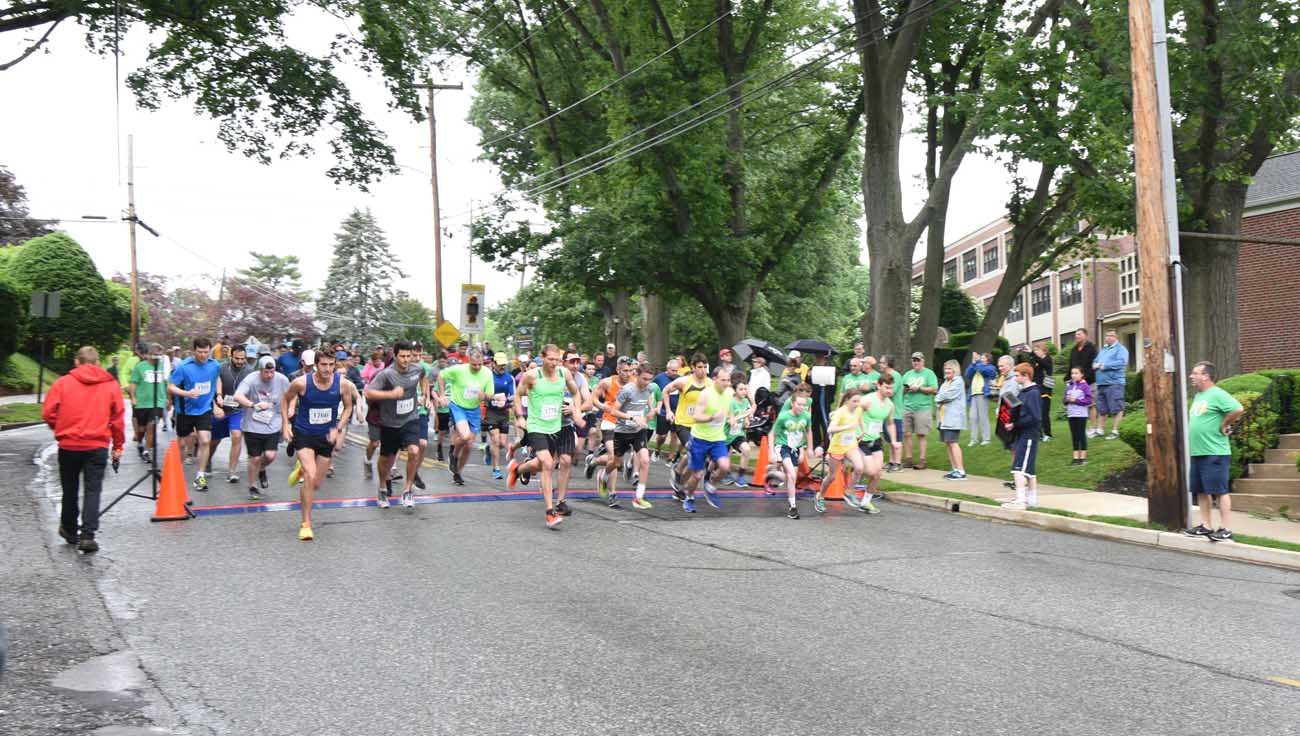 Runners in the St. Dot's Challenge, a 5K race benefiting the Delaware County parish and other community programs, head out from the starting line through the neighborhoods of Drexel Hill on Saturday, June 3. (Stephanie Perea)

They also have to order race day T-shirts for all runners and trophies for the winners in several categories. As a safety precaution, police and EMTs must be on duty during the run and walk.

“Thanks to the efforts of those who organized the event in the past and with their continued help, putting this year’s event together was fairly stress free,” said committee member Rob Liberatore. “It eases our minds. It keeps the runners safe.”

The goal for the event is to generate $10,000 to $15,000 for St. Dorothy’s. The funds are used to assist with proceeds for programs including Family to Family, Aid for Friends, the school’s athletic association and tuition assistance.

“I grew up in this parish,” said Santora. “It means the world to help with this event that supports worthy causes. It brings the community together.”

While many participants are members of St. Dorothy’s or another local parish, one runner in the kids’ race was Chloe Conte, 11, of Allentown, New Jersey who was visiting relatives in the area. In addition to spending time with family and extending her support, she found the race a great way for her to warm up for a lacrosse game later that day.

“It’s really fun,” she said. “I like to get a good workout by supporting the church.”

Among those running the 5K was John Pickhaver Jr., 27, of Drexel Hill who represented the United States in the Los Angeles Marathon this past March. He came in 10th overall in that marathon with a time of 2:23:27. Pickhaver continued his momentum in the St. Dot’s Challenge and prevailed as the overall winner in 15:58.

The day always stands out for the Pickhaver family as the late John Pickhaver Sr. founded the event 20 years ago along with parishioner Jim McGowan. Pickhaver’s wife, Nancy, and daughters Kelly, Caitlin and Julie along with John Jr. come every year. The family now has a grandchild and another one on the way, which makes this a three-generation tradition.

“It feels great,” Nancy said. “Everyone does a great job.”

Sarah Hayes, 18, placed first among the female participants in 21:06. A senior at Cardinal O’Hara High School who graduated from St. Dorothy School in 2013, Hayes is a five-sport athlete including track and cross-country.

There were age group winners as well. Coming in first for the 14 and under category was 11-year old Maura Brady (24:06), a sixth grader at St. Dot’s who ran the race for the second time.

“It felt difficult,” said Brady. “I was trying to keep up with my sister. It felt awesome.”

This marked Maggie Purcell’s fourth time participating in the challenge and she surprised herself by prevailing in the 40-49 age group with a time of in 28:05.

“I love participating,” she said. “It’s a great turnout.”

With a wonderful group of loyal volunteers, St. Dorothy’s hopes to continue this tradition in the years and decades to come.