Getting fit with Mary by combining rosary with stretches 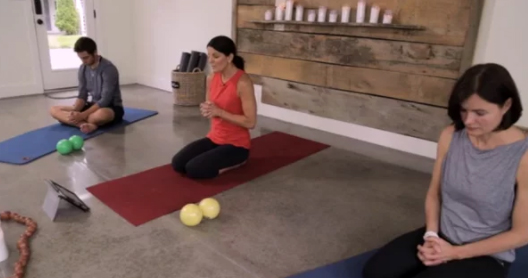 “I urge you therefore, brothers, by the mercies of God, to offer your bodies as a living sacrifice, holy and pleasing to God, your spiritual worship” (Romans 12:1-2).

One way to honor your body, while also growing in your faith, is to take a SoulCore class. The classes pair core strengthening, stretching and functional movement with the prayers of the rosary.

Renee Kurz of St. Francis Xavier Parish in Philadelphia’s Fairmount section discovered SoulCore several years ago through a friend. Trained as a modern dancer and raised Catholic, she was drawn to the idea of a workout revolving around the format of the rosary. From her first purchase of a Soul Core Joyful Mysteries DVD, she was hooked.

After completing a training retreat Kurz became a SoulCore leader. Today she leads a monthly class in Fairmount on the first Saturday of each month at the Ukrainian League Hall, 800 North 23rd Street in Philadelphia. Through it she is passing on her love of the format that keeps her mind focused and intensifies the prayer of the rosary.

Prayer is at the heart of SoulCore classes and exercise comes secondary, Kurz said. In a non-competitive environment, participants gather in a circle and pray the rosary in union with stretching and strengthening exercises. The phrase “honor your body” is repeated throughout the session. If participants feel tired they are encouraged to modify or rest and to listen to their body.

She emphasizes it is not comparable to yoga or similar exercise disciplines, and no yoga poses or Sanskrit terms are used. The goal of SoulCore is union with God and an integration of one’s mind, body and spirit rather than meditating to elevate one’s own self.

SoulCore has its roots in Marian devotion as a way of coping with personal tragedy. Cofounder Colleen Scariano was mourning the deaths of multiple family members under difficult circumstances and her devotion to the Blessed Mother increased during those trials. As she prayed the rosary while running, she began to wonder if there was a way she could incorporate core strengthening with her devotion to Mary.

She talked about it with her long-time friend Deanne Miller, who also had a devotion to Mary and background in fitness. Miller believes it was the Holy Spirit who eventually led the friends to start SoulCore.

The rosary and the exercises are used as an invitation to grow closer to the Lord. “The benefits of SoulCore are that you are absolutely nourishing your soul through the process of the prayers, Miller said. “Our focus is on the fruits of the mysteries which takes you into a deeper place spiritually and certainly physically, because you are moving your body with the prayers.”

Since the rosary is facilitated by a leader, participants don’t need to be familiar with or memorize the prayers of the devotion. “The only thing necessary is an open heart and a desire to grow in holiness,” Kurz said.

Catholics drawn to yoga may find SoulCore an exercise alternative that is entirely in keeping with their Christian faith, and one that can draw them closer to the Lord.

PREVIOUS: At priests’ gathering, they hear about power of humility

NEXT: Archbishop: In ‘post-Christian world’ fidelity, charity, truth stand out