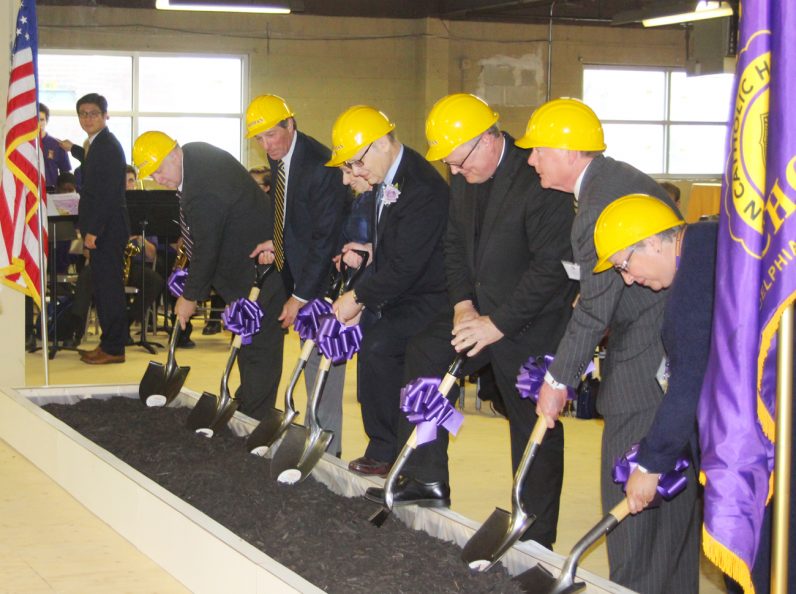 Roman Catholic High School officials ceremonially break ground on the new Howard Center for the Arts on Tuesday, May 30. The center is part of a long-term campus expansion plan.

Roman Catholic High School, a center city Philadelphia fixture on North Broad Street since 1890, marked the first phase of its ambitious $25 million campaign, “A Vision of Promise,” on Tuesday, May 30 by breaking ground on a new facility.

This initial stage — the construction of the 40,000-square foot Howard Center for the Arts — is fully funded and will be completed within a year. The center is named for Barry and Elayne Howard, longtime supporters of Roman Catholic. Barry Howard has been a member of Roman’s board for more than 25 years.

The new building, located about a block away at 1212 Wood Street, will include band rooms, instrument storage space, a computer-aided design lab, a digital photography studio, a piano lab, a small theater and other facilities for art programs, plus parking spaces.

While previous expansions at Roman have been through additions to the original building at Broad and Vine streets, the current plan makes use of available land to develop new structures.

“We will have different buildings for different subjects, like a mini-college,” said Father Joseph Bongard, Roman’s president. During the next phase, work will begin on a new facility to house the school’s STEM (science, technology, engineering and mathematics) program.

The campus expansion is not designed to increase Roman’s enrollment but rather to offer broader and deeper programs, Father Bongard explained.

Right now, the all-boys high school has about 930 students, a greater number of males than any of the co-ed institutions in the archdiocesan education system. About 450 to 500 prospective students apply each year to Roman, which aims for an average freshman class of 240.

This year’s graduating seniors have been accepted by a wide range of colleges, from the Ivy League to top state schools, local colleges and community colleges.

“We have one student who was accepted by West Point and another at the Naval Academy,” Father Bongard said.

Roman’s student body at this time is drawn from 173 different elementary schools. In the freshman class alone, there are graduates from 51 different Catholic schools and 50 public or charter schools.

With this number of schools represented, some of Roman’s students are clearly coming from a distance. Yet daily average attendance has been at 97 percent, dipping only slightly to a respectable 94 percent during this year’s SEPTA strike.

Father Bongard believes some of Roman’s strongest competition for students is not other archdiocesan high schools but private academies. “Our tuition is $8,000, which is about one third of theirs,” he said.

Roman Catholic has always been unique among the archdiocesan Catholic high schools in that the property and building are owned by a trust set up under the will of the original benefactor, Thomas Cahill. Originally, Roman drew students from the entire Philadelphia area, but as other archdiocesan high schools were opened, enrollment boundaries were established.

Over time, Roman’s assigned territory shrank, and by the 1980s, the school was drawing upon Catholics who had migrated to the suburbs. Enrollment had dropped to under 570 students.

In January 1986, archdiocesan administrators proposed that the school should be closed, but the Cahill Trust Board did not immediately consent, and very vocal alumni rallied to its support.

As a compromise, the archdiocese allowed Roman to recruit students from anywhere, mandating that the school could remain open if it could enroll 250 new students.

Thanks to alumni contributions and recruiting, the school met its enrollment target. Since then, the same requirements have been extended to all archdiocesan high schools, with varying success.

Now, “Faith in the Future Foundation and the Office for Catholic Education have embraced what Roman Catholic has been doing for some 20 years,” Father Bongard said, highlighting the work of former Roman presidents Msgr. Francis Beach and Father Paul Brandt.

“Monsignor Beach was a visionary,” Father Bongard said. “He recognized it was not one issue, it is multiple issues — facilities, academics and environment. No stone was left unturned. There was a lot of hard work done to get us here where we are today.” 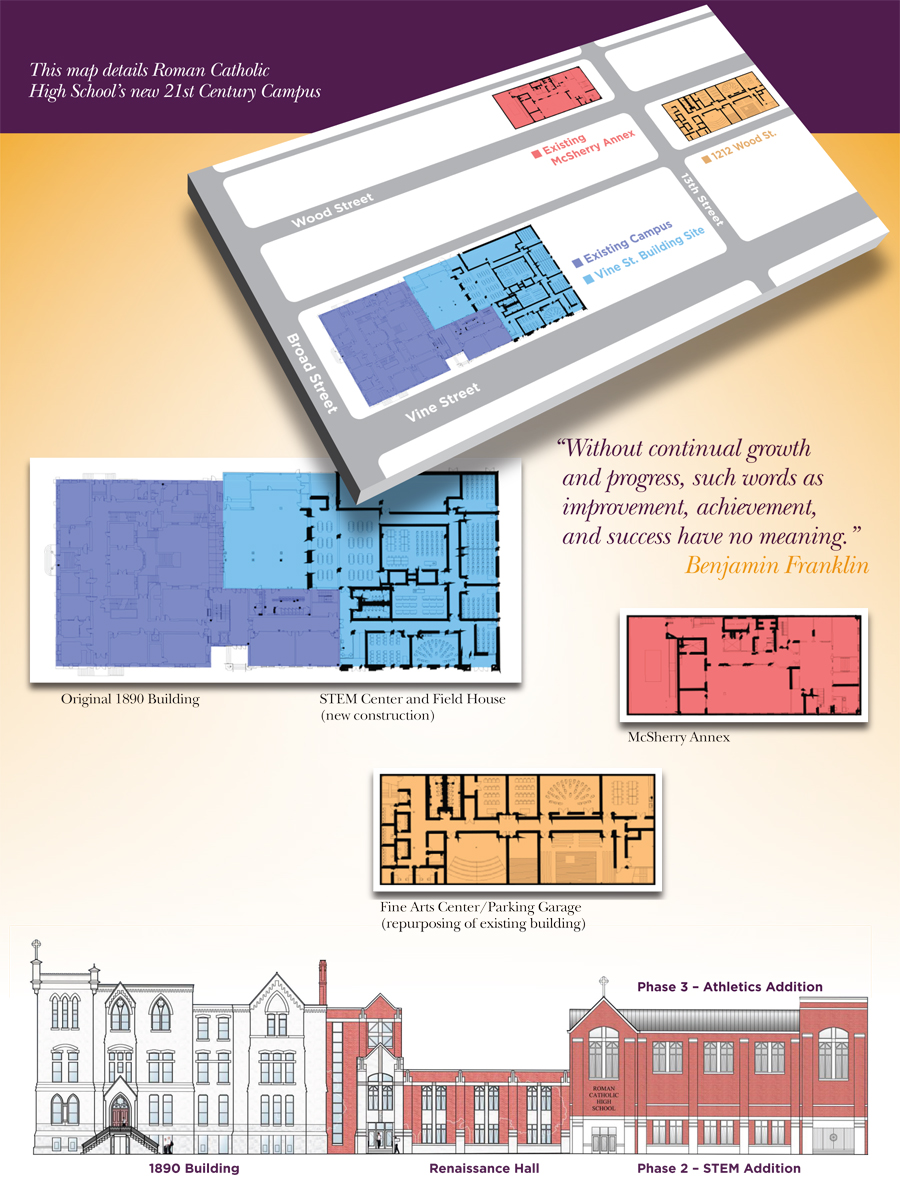 A rendering from the “Vision of Promise” campaign shows the anticipated expansion of Roman Catholic High beyond its current facility based on Broad Street in center city Philadelphia.

NEXT: At priests’ gathering, they hear about power of humility