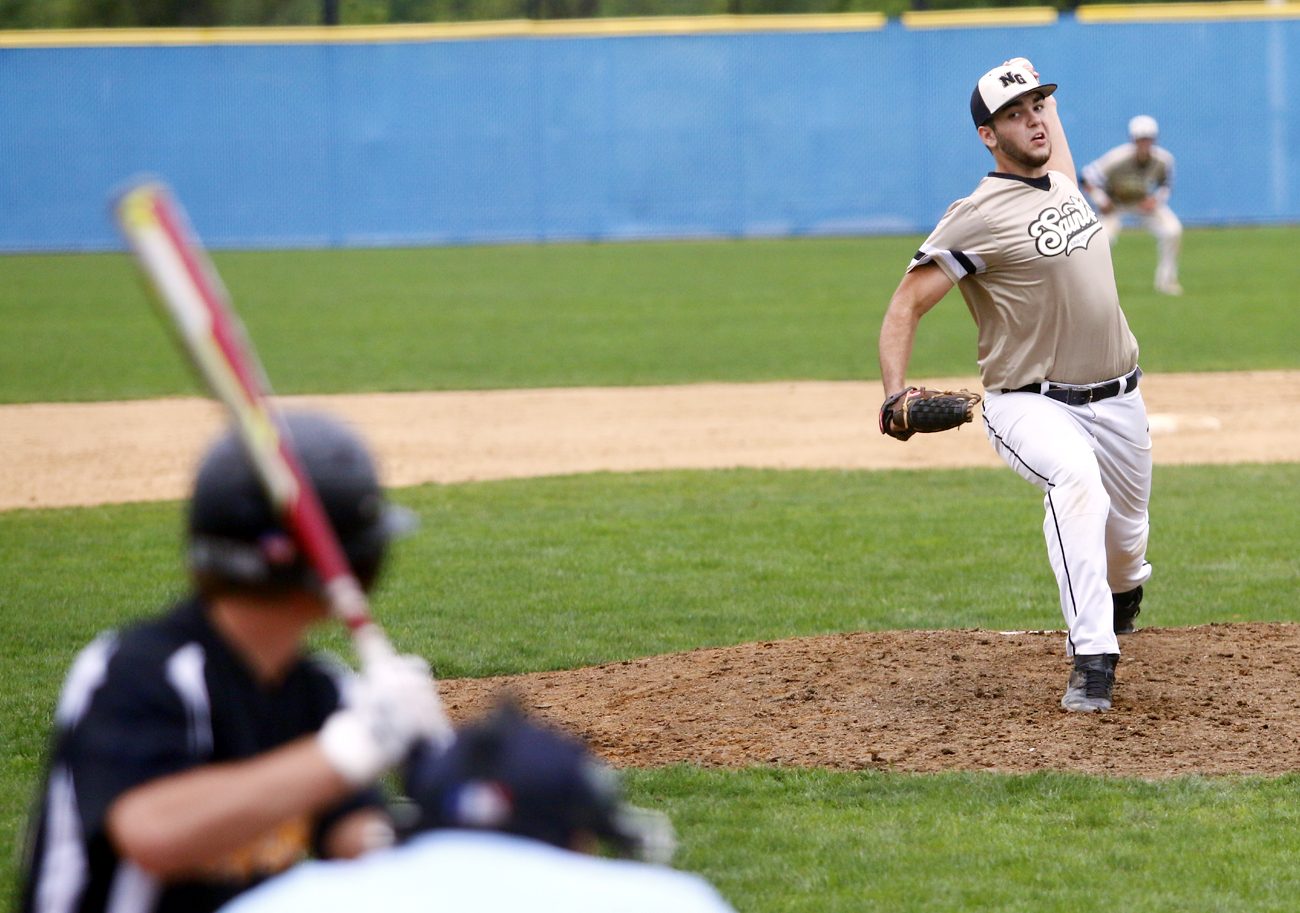 Neumann-Goretti senior pitcher Phil Sanborn pitches his way out of a two-out bases-loaded jam in the sixth inning, ending the threat by striking out Wood senior Mick Pristas after a tough 12-pitch at bat.

Neumann-Goretti senior Jared Healey was asked to assess what ignited a turnaround to the Saints’ baseball season after losing their first two Catholic League games.

“We dropped those games,” Healey said. “After that, we went to a team dinner and from there, we started rolling.”

The nutrients that were in that team dinner should be classified as lethal.

The Saints methodically rose in the standings, finished tied for first place, bulldozed rugged competition in the early rounds of the playoffs, and then defeated Archbishop Wood, 6-4, May 27 at Immaculata University to win their second consecutive Catholic League title and sixth in 10 years.

(See a photo gallery from the championship game.)

Of those championships, this has been among the more impressive.

The Catholic League was comprised of uncommon parity. Several teams had a more than legitimate chance to capture a crown. Five teams are playing in the PIAA state playoffs this week; four snared a city championship.

“We knew after the beginning of the season that we would have a lot of work to do in order to make it back to the top, which was our goal,” said Healey. “We stuck together and just worked as hard as we could every day.

“It honestly started off the field. The bond we created between the guys was so strong that, no matter what, the next guy would have your back.”

Wood sent seven players to the plate in the top of the first inning and, highlighted by a two-run double by sophomore Antonio Rosselli, scored three runs. Undaunted, Neumann-Goretti countered with a three spot of its own, senior Brian Reynolds’ two-run single providing a 3-3 tie.

Wood took a 4-3 lead in the third, but the Saints did likewise in their half, taking full advantage of control issues (three walks and three wild pitches) to score two runs.

The Saints added an insurance run in the fourth, and N-G senior left-handed pitcher Phil Sanborn held the pesky Vikings scoreless the rest of the way. That necessitated an incredible 12-pitch at bat by Wood senior Mick Pristas with two outs and the bases loaded in the sixth. Although Pristas struck out to end the inning, he gained respect from his counterpart.

“It was the toughest batter I pitched against all game,” said Sanborn. “He kept fighting and fouled off every pitch even when I mixed my change-up in with it. Then I finally caught him with a low inside fastball.”

The game’s scariest moment occurred in the bottom of the third. Wood junior catcher John Gifford caught an errant pitch below the facemask. After staying down and receiving aid for several minutes, Gifford rose to his feet to applause, but then quickly collapsed.

An ambulance was summoned, and Gifford was taken to a local hospital for evaluation. Wood officials later said that Gifford was fine. He is playing in the state playoffs.

But it was scary.

“After (Gifford) got hurt, we knew that they were going to come out and try to finish off the game for him, so we had to match or even double their intensity,” said Healey. “It was an awful thing that he was hurt. At the end of the day it is baseball and we had to play.”

“Just pure panic,” he said. “It was chilling to see something go that wrong to the kid.”

McGettigan had the honor of catching the final out in foul ground.

“I was thrilled,” said McGettigan. “I was hoping the ball would come in my direction, and as soon as the ball was hit in my vicinity, my main objective was just to catch it and not let my emotions get the best of me and make a mistake. Be calm and just catch the ball.”

He caught it, and Neumann-Goretti was once again the Catholic League champion.