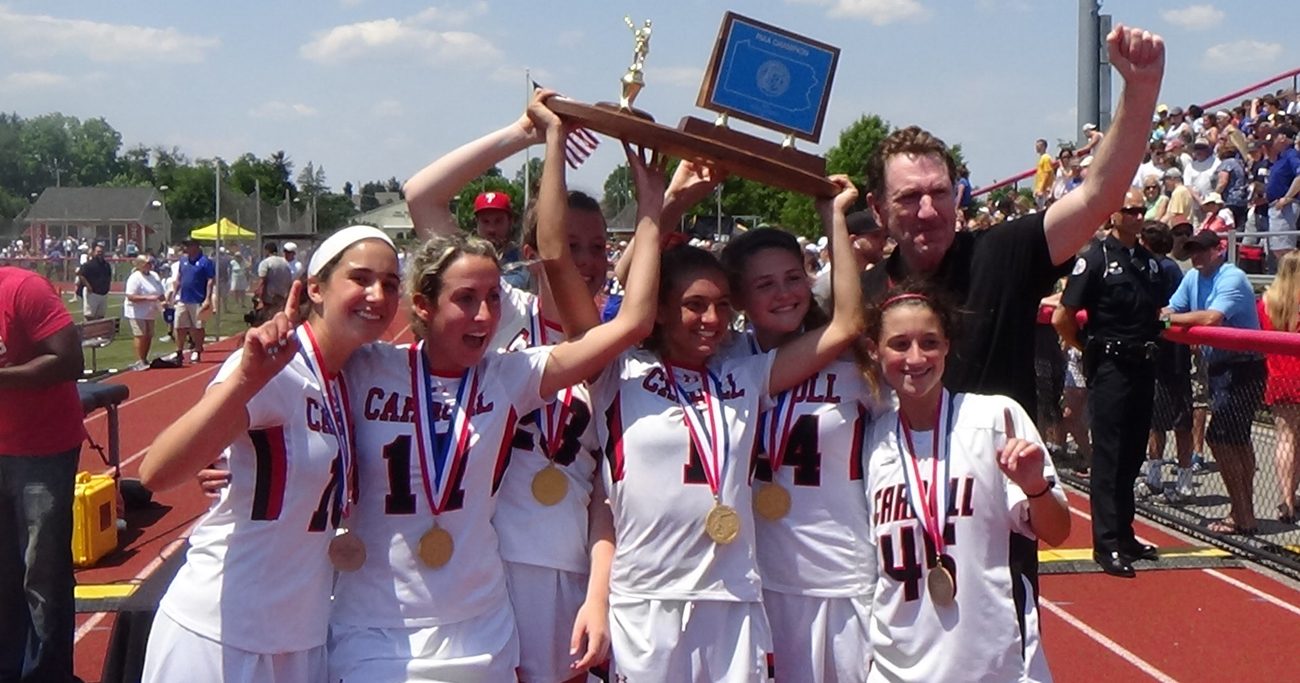 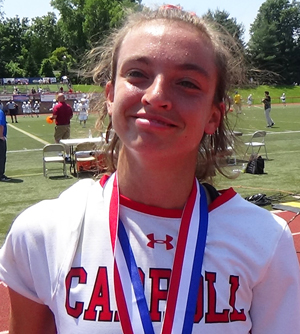 The final seconds were agonizing, but the Archbishop Carroll girls’ lacrosse team faced the adversity with steadfast resolve.

Because of that, the Patriots are the PIAA 3A state champions.

For the past 17 years, Carroll has dominated the Catholic League by going undefeated in both the regular season and postseason, a victory streak that stands at a surreal 216. The Patriots’ last lacrosse loss in league play was to St. Hubert in the 2000 title.

Asked if the victory removed a lot of frustration, Beers bristled a bit.

“It’s always matchups,” said Beers. “It’s always about the brackets. The last two years we played the (eventual) champs in our first round. So, we’re playing the state championship in the first round of the PIAA. I don’t know much more you can say about that.”

Beers extolled assistant coaches Jess Lake and Peter Hewitt. The former mentors the defense; the latter, the goalies. Beers concentrates on the attack.

“We have great athletes,” said Beers. “They just needed coaching and teaching. We teach. You get a lot of good athletes and add in some good coaches and teachers, and this is what can happen.”

Several Patriots (24-1 overall record) stood out in a game that saw Carroll seize a 5-2 halftime lead but surrender five of the next six goals to fall behind, 7-6.

Undaunted, the Patriots tied the game at 7-7 on a goal by junior Sydney D’Orsogna.

With both crowds on their feet for the final 10 minutes, Carroll regained the lead at 8-7 on senior Sam Swart’s goal with 9:43 left in regulation. With 5:10 remaining, the Syracuse University-bound Swart scored her third goal of the game to increase the lead to 9-7. Both of her final tallies were assisted by sophomore Madison Henry.

“Being a senior, this is incredible,” said an ecstatic Swart, speaking a mile a minute. “It’s amazing. It’s a great way to end it.”

Inside the final minute, Springfield twice gained possession. Its first ownership was interrupted by brilliant stick work by sophomore Liza Dellarata, who said she wasn’t nervous toward the end.

“I had full confidence in our defensive abilities,” she said. “They’re a great team. We just played better today.”

The second was thwarted by a terrific save by senior goalie Maddie Ferraiolo, who described her heroics as “slow motion … I can’t even describe it.”

The diminutive Ferraiolo praised her defense.

“They’re incredible,” she said. “They always have my back. They’re always positive. They’re like, ‘You got this.’”

Ferraioli noticed her team’s steady improvement over the past four years.

In addition to the three goals by Swart and one by D’Orsogna, Carroll also received two goals from junior Katie Detweiler and one each from junior Rachel Matey, junior Grace Gallagher, and sophomore Amber Germer.

“I knew there was a job to be done,” said Detweiler. “I knew everyone would put their heart into it. We wanted this for so long.”

That want is no more. 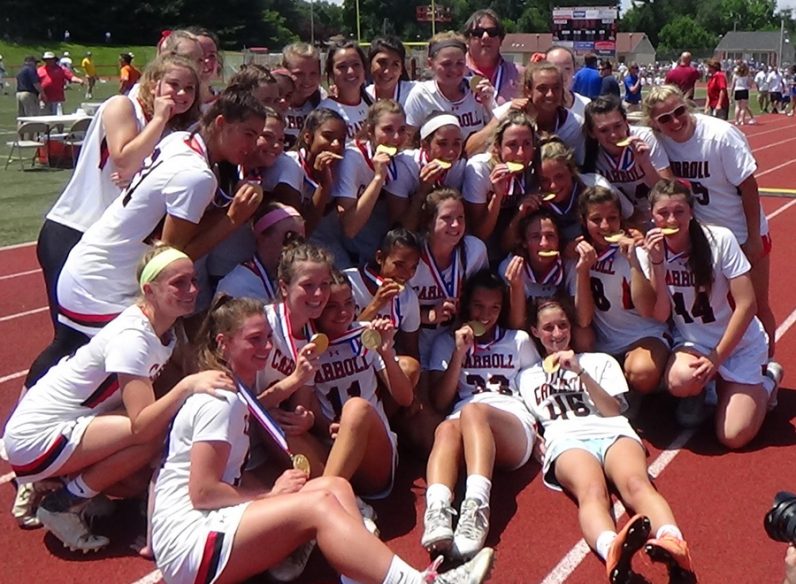 The Patriots enjoy the ultimate fruit of a long season — the PIAA Class 3A championship. (John Knebels)

NEXT: Saints zoom to their second state championship