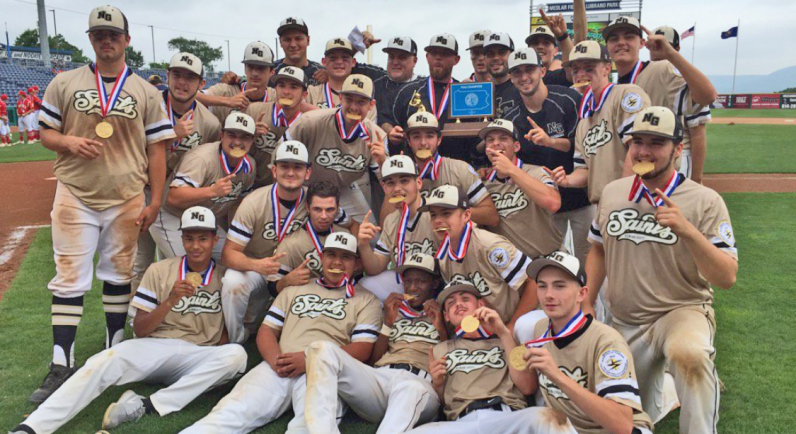 “We wouldn’t have changed our season around after our struggles if it wasn’t for Coach Zoom,” said Mascuilli. “He brought us together as a team … telling us to go out and have fun doing whatever it is as a whole team. Once we started to do that, the wins started to pile up and we knew we weren’t gonna lose anymore.”

It was difficult to acknowledge that this was the same Neumann-Goretti squad that came out of the gates hardly resembling a future champion. In their initial three games, the Saints lost one nonleague game and then two Catholic League tilts.

For the next 24 games, however, the Saints were nearly flawless. They compiled a 23-1 record during that sizzling stretch, finishing tied for first in the Catholic League regular season before seizing victories — including a second straight Catholic League title — in every way possible, often via comeback.

“It is hard to believe we struggled so early on, but we all believed we would bounce back and get back to where we were last year,” said junior R.J. McGettigan, who hit .400 with seven runs scored and six RBI during the postseason. “It feels phenomenal.”

In the first round of the state playoffs, the Saints nipped Dock Mennonite, 4-3, almost blowing a 4-0, seventh-inning lead in the process.

The semifinals included more craziness. Neumann-Goretti led comfortably, 10-4, before Bellwood-Antis tallied five runs in the seventh and had the tying run at third. A brilliant play by senior second baseman Steve Pizza preserved the lead and the win.

In the championship win over McCort, a 7-3, seventh-inning lead was trimmed to 7-4 with the bases loaded before a three-pitch strikeout by sophomore Joe Messina halted the rally. The Saints (23-4) mustered seven hits, but it was the seven walks, wild pitches and key errors by McCort that provided the winning margin.

“We put a lot of pressure on the opposition,” said senior Phil Sanborn, the winning pitcher against McCort, one of four post-season victories by the senior left hander over a team-leading 30 2/3 innings pitched. “We bring out the intensity that gets other teams nervous.”

Mascuilli, who contributed two wins and a 2.80 earned-run average over 15 innings, said winning another state championship “feels like the world was lifted off my shoulders.”

Healey, a defensive wizard at shortstop who slugged a team-best .550 in the postseason, said winning his last high school game in such a celebrated fashion is difficult to explain.

“I was a part of the last one, but I can tell you that winning it as an underclassman is great, but winning it your senior year, there’s nothing that compares,” said Healey.

Messina won two games and added a pair of saves.

“Getting this opportunity to close out our second state championship title as a sophomore is indescribable,” said Messina. “This was the culmination of all our blood, sweat, and tears that each and every member of this team poured out for the past 10 months. I couldn’t be happier to do it with this special group of guys that I consider brothers.

“This was a combined effort from everybody in this program, coaches to bench guys who gave everything they had all year. Even after our early struggles, there was never a doubt in our minds that we would end up back here at Penn State.”

“It’s honestly the greatest feeling in the world,” he said.