Do we look forward to ‘the life of the world to come’? 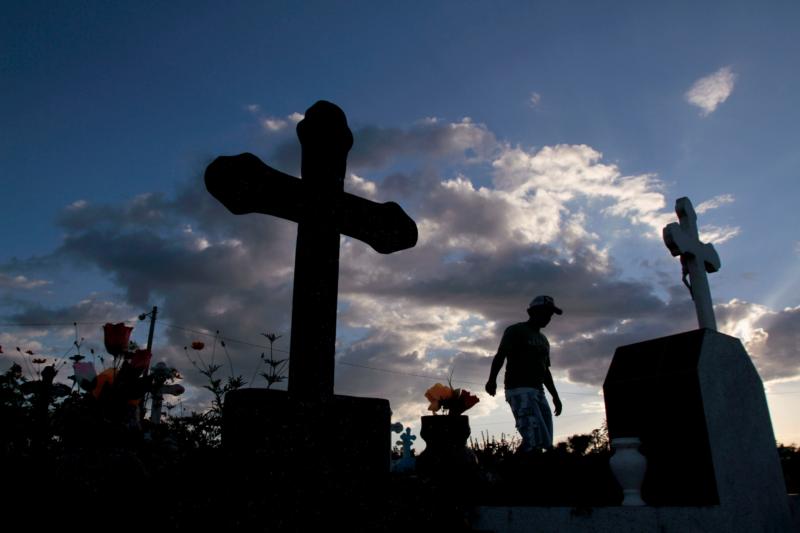 A man visits the graves of deceased relatives at a cemetery in Managua, Nicaragua. In the Nicene Creed we profess that we “look forward to the resurrection of the dead and the life of the world to come.” (CNS photo/Oswaldo Rivas, Reuters)

Heaven is so hard to imagine! For heaven is to such a great extent unknown to us.

Yet, we who are Catholics profess in the Nicene Creed during the Mass that we “look forward to the resurrection of the dead and the life of the world to come.” But do we? Pope Benedict XVI wondered about that.

In his 2007 encyclical “Spe Salvi” on Christian hope, Pope Benedict posed the question directly. He asked, “Do we really want this — to live eternally?” His concern was that eternal life might sound “monotonous” to many or even “unbearable.”

In fact, the pope speculated, there may be many who “reject the faith today simply because they do not find the prospect of eternal life attractive.”

His comments launched a novel conversation, yet a compelling one. Some commentators asked in a slightly humorous vein, Will heaven be boring? Will there be anything to do in heaven? Naturally, the conversation ultimately progressed to asking what eternal life truly implies.

Pope Benedict observed that on the one hand eternal life “drives us,” though “we do not know the thing toward which we feel driven.” In one way or another, “we cannot stop reaching out for it.”

However, he acknowledged, we can only attempt to imagine an eternity that “is not an unending succession of days in the calendar but something more like the supreme moment of satisfaction.”

This will be “like plunging into the ocean of infinite love, a moment in which time — the before and the after — no longer exists,” Pope Benedict explained. He said, “Such a moment is life in the full sense, a plunging ever anew into the vastness of being, in which we are simply overwhelmed with joy.”

The pope noted how “Jesus expresses” this in the Gospel of John where he says, “I will see you again, and your hearts will rejoice, and no one will take your joy away from you” (16:22). “Think along these lines” in attempting “to understand the object of Christian hope, to understand what it is that our faith, our being with Christ, leads us to expect,” the pope advised.

Pope Benedict was not alone among recent popes in attempting to spark a renewed conversation about heaven. St. John Paul II captured the rapt, though somewhat puzzled, attention of believers and nonbelievers alike when in July and August 1999 he delivered a series of talks on heaven, hell and purgatory.

It really got people thinking and talking when he observed that heaven is not a “physical place in the clouds” but a “state” of living in full “communion with God, which is the goal of human life.”

Quoting the Catechism of the Catholic Church, Pope John Paul called heaven “the state of supreme, definitive happiness” (No. 1024).

He acknowledged that a spatial image of heaven indeed is found in Scripture. He stressed, moreover, that “it is always necessary to maintain a certain restraint” when describing “ultimate realities” like heaven, “since their depiction is always unsatisfactory.”

But today, he proposed, “personalist language is better suited to describing the state of happiness and peace we will enjoy in our definitive communion with God.”

What is known “in the context of revelation,” he commented, is “that the ‘heaven’ or ‘happiness’ in which we will find ourselves is neither an abstraction nor a physical place in the clouds but a living, personal relationship with the Holy Trinity.”

It seems that the things we look forward to prompt us to get up in the morning. They are the stuff of hope. But the things we dread or that remain basically unknown to us can create anxieties and give rise to troublesome fears.

So a conversation about heaven as a source of hope to look forward to seems important. Cardinal Vincent Nichols of Westminster, England, speaking during his younger years as an archbishop to the 1999 special assembly for Europe of the world Synod of Bishops, encouraged such a conversation, one whose aim is not simply to “engender fear.”

Instead, he said, the church’s teaching about death and eternity can offer people the hope that “day by day the key to true judgment is always mercy.”

A challenge in looking forward to the life of the world to come is that many of us hardly are ready to leave behind the joys or even the obligations of life here and now. Pope Benedict recognized this, writing that what often is desired may not be “eternal life at all, but this present life.”

But must present life and eternal life stand in opposition? Redemptorist Father Anthony J. Kelly, an Australian theologian, sought in “God Is Love” to show how they intertwine.

“The seed of eternal life is germinating” now, he suggested in his book. “The life of the world to come is already present as we participate in the activity of God’s loving.”

Calling love “the very life of the new creation,” Father Kelly spoke of “the world to come” as “the realm of life to the full.”

PREVIOUS: Imagine a closer relationship with God when picturing heaven

NEXT: What Scripture reveals about heaven