Imagine a closer relationship with God when picturing heaven 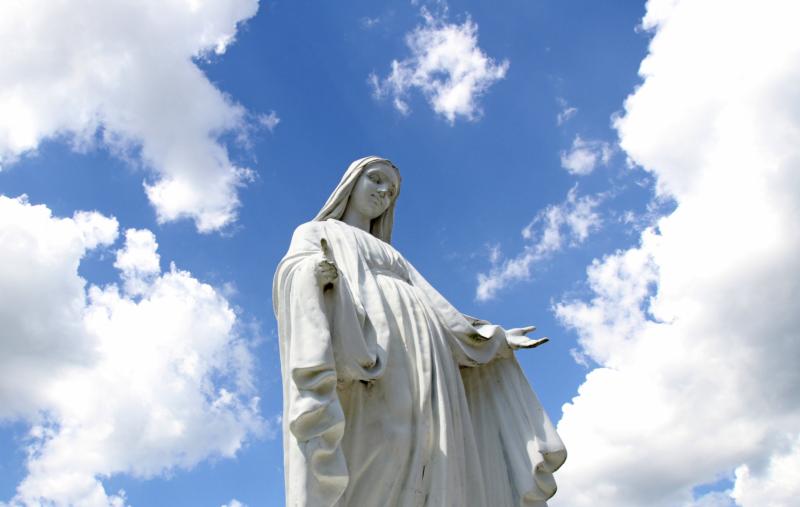 A statue of Mary overlooks the grounds of St. Jude Church in Mastic Beach, N.Y. We have difficulty envisioning a heavenly home because “most of us just can’t fathom that much beauty and joy,” says Kelly Johnson, who teaches theology and ethics at the University of Dayton in Dayton, Ohio.(CNS photo/Gregory A. Shemitz)

But the notion of a happy home far away in the sky after our mortal passing isn’t everyone’s idea of “the life of the world to come” asserted as the profession of Christian faith in the Nicene Creed. And uncertainty fuels the dread of death.

Two theologians suggest focusing less on the idea of literal skyward real estate (that’s the supernal part) and instead joyfully looking forward to a closer relationship (the eternal part) with God, which is, of course, finding heaven on earth.

“What would it be like to live in a community suffused with love?” asks Julia Upton, professor of theology at St. John’s University in Jamaica, New York.

Many people think of heaven as “the carrot God holds out for us,” says Kelly Johnson, who teaches theology and ethics at the University of Dayton in Dayton, Ohio. “It’s the carrot, it’s the bribe. That’s not joyful. It’s not a picture of God that inspires. That’s not a great way to think about heaven.”

Upton used to ask her students about their impressions and cautioned them about thinking about a physical space. The “many mansions” mentioned in John 14:2 “are even more of a metaphor.”

“I think of it in terms of a grand review. Of seeing how it all fits together. I don’t have a Disneyland image of it.”

The starting place for many people, Johnson says, is, “Life is a vale of tears. Heaven is the solution. Life is the problem and death is the answer. These are the views when we think about heaven.”

Go for joyfulness instead, she advises.

“The image I really like is when you’re at a great wedding, and if you can see how happy the couple are, and there’s this tenderness between them, and delight. Just the joy of being together.”

And don’t assume that the departed are so distant.

“I don’t think that the dead are that far away from us,” says Upton. “I think they’re pretty close. We often are so consumed by the loss and the absence that it takes a while to acknowledge their presence.

Following the deaths of both her parents, she said she grew to think of them as “companions and close friends. You can be aware of that person’s presence just when you kind of needed that presence.”

Johnson likes to remind people of the saying of St. Catherine of Siena, popularized by Dorothy Day, the co-founder of the Catholic Worker Movement who spent her life helping the poor in urban slums, “All the way to heaven is heaven, because he (Christ) said, ‘I am the way.'”

“What she means, of course,” explains Johnson, “is that the real message of Christ is that God is with us, and Jesus has come to our world most where we are broken.”

“The way we stand in the midst of God is standing in the world’s suffering.”

She also is an admirer of Jesuit Father Greg Boyle, founder of Homeboy Industries, a gang intervention program in Los Angeles. “He can tell stories that break your heart.”

The principal lesson she’s learned from Father Boyle: “If we want to be happy talking about heaven, we have to practice the joy of being with Jesus. We can’t stand on the sidelines. Faith is not a spectator sport.”

As for spectacularly (and supernal) heavenly imagery, Johnson prefers one of the oldest, coming from Dante Alighieri’s epic poem “The Divine Comedy”: the celestial rose, made famous by the 19th-century illustration by Gustave Dore. Souls of the faithful form the petals, and are attended by flying angels who distribute peace and love.

We have difficulty envisioning a heavenly home because “most of us just can’t fathom that much beauty and joy,” she says.

NEXT: Do we look forward to ‘the life of the world to come’?