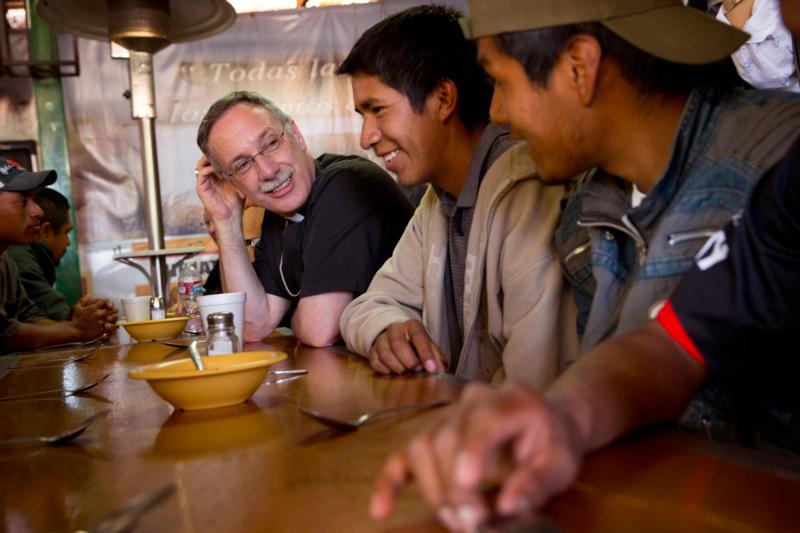 Auxiliary Bishop Luis R. Zarama of Atlanta is seen in the Mexican city of Nogales in this 2014 file photo. (CNS photo/Nancy Wiechec)

CHARLESTON, S.C. (CNS) — The Catholic dioceses of the Carolinas and Georgia are experiencing record growth, Archbishop Wilton D. Gregory of Atlanta said during a meeting of the U.S. Catholic Church’s Atlanta province.

“We realized that all five of the dioceses represented here have recently opened new chancery offices,” Archbishop Gregory said in an interview with The Catholic Miscellany, newspaper of the statewide Diocese of Charleston.

“We are all in a growth mode. That’s a good thing,” he said during the province’s June 26-29 meeting in Charleston. “We are spending part of our time here talking about the need to establish new parishes, expand pastoral outreach, and respond to growing numbers both from immigration and those moving here from other parts of the country. We all are sharing in this growth.”

Archbishop Gregory said the leaders realized the scope of growth in their Southern province while touring the Diocese of Charleston’s new pastoral center, which opened in 2016.

That growth is the opposite of what is happening in some Northern U.S. dioceses, where the number of people in the pews is declining in many areas, and parishes and schools are being closed or forced to consolidate.

In addition to the Archdiocese of Atlanta and the Diocese of Charleston, the province includes the Diocese of Savannah, Georgia, and the North Carolina dioceses of Raleigh and Charlotte.

Archbishop Gregory said the prelates spoke about the ongoing impact of immigration in their areas, including how new legislation and the political climate are affecting the immigrant population.

Bishop Guglielmone said increased attention to the immigration question is especially important to dioceses in the province because most of the Hispanic immigrants in the region are Catholic.

“We realize that we have those who are documented and undocumented, and they are all our brothers and sisters,” Bishop Guglielmone said. “We have to see how we can be of assistance to them.”

The bishops also discussed issues they expected to be part of the July 1-4 “Convocation of Catholic Leaders: The Joy of The Gospel in America” in Orlando, Florida, especially the need for increased evangelization.

Another topic before the province’s church leaders was the effect of Pope Francis’ 2016 apostolic exhortation “Amoris Laetitia” (“The Joy of Love”) on ministry to married couples and families. Archbishop Gregory said they focused particularly on how each diocesan tribunal is responding to Pope Francis’ call to streamline the annulment process, and make it more accessible and affordable.

Archbishop Gregory also celebrated Mass in the Charleston diocesan pastoral center’s Chapel of the Holy Family, which was attended by diocesan employees and people from the community.

In his homily he reflected on the day’s Gospel reading that included Christ’s instruction on how humans should interact with one another: “Do to others whatever you would have them do to you.”

Those simple words developed into what is now known as the Golden Rule, he reminded the congregation, but noted that today that rule is under serious assault.

“If there has ever been a moment in human history when we should listen to this rule, we are in it now,” Archbishop Gregory said. “We have had terrible examples lately of people who have obviously forgotten how they would like others to treat them. Matthew in this Gospel does not mince words. If we all would simply treat others the way we want to be treated, the world would be in a better place right now.”

PREVIOUS: Parish prays for congressman in critical condition after shooting