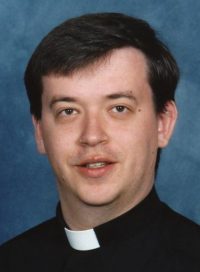 Bishop-designate Rabiy, 41, currently serves as vicar general of the archeparchy and as pastor of the Nativity of the Blessed Virgin Mary Ukrainian Catholic Parish in Reading, Pennsylvania.

The appointment was announced in Washington Aug. 8 by Msgr. Walter Erbi, charge d’affaires at the apostolic nunciature in the United States.

Born Oct. 1, 1975, in Lviv, Ukraine, Bishop-designate Rabiy studied at St. Josaphat Ukrainian Catholic Seminary in Washington and was ordained to the priesthood in 2001.

In a joint statement Archbishop Stefan Soroka of the Philadelphia archeparchy, who is metropolitan of U.S. Ukrainian Catholics in the United States, and Auxiliary Bishop John Bura issued a joint statement, saying they, along with the archeparchy’s clergy, religious and faithful “joyfully welcome the Holy Father’s appointment” of the new auxiliary.

“Our archeparchy and our Ukrainian Catholic Church will be well served by the vibrant and dedicated ministry demonstrated by our newly nominated candidate to the episcopacy,” they said. “We congratulate him. We commit ourselves to support him with our prayers, words of encouragement, and joyful sharing in his episcopal ministry.”

“God bless Very Rev. Andriy Rabiy richly in ways only he can as he undertakes his new ministry as a bishop of the church. Our heartfelt welcome and ‘Mnohaya Lita!'” they added