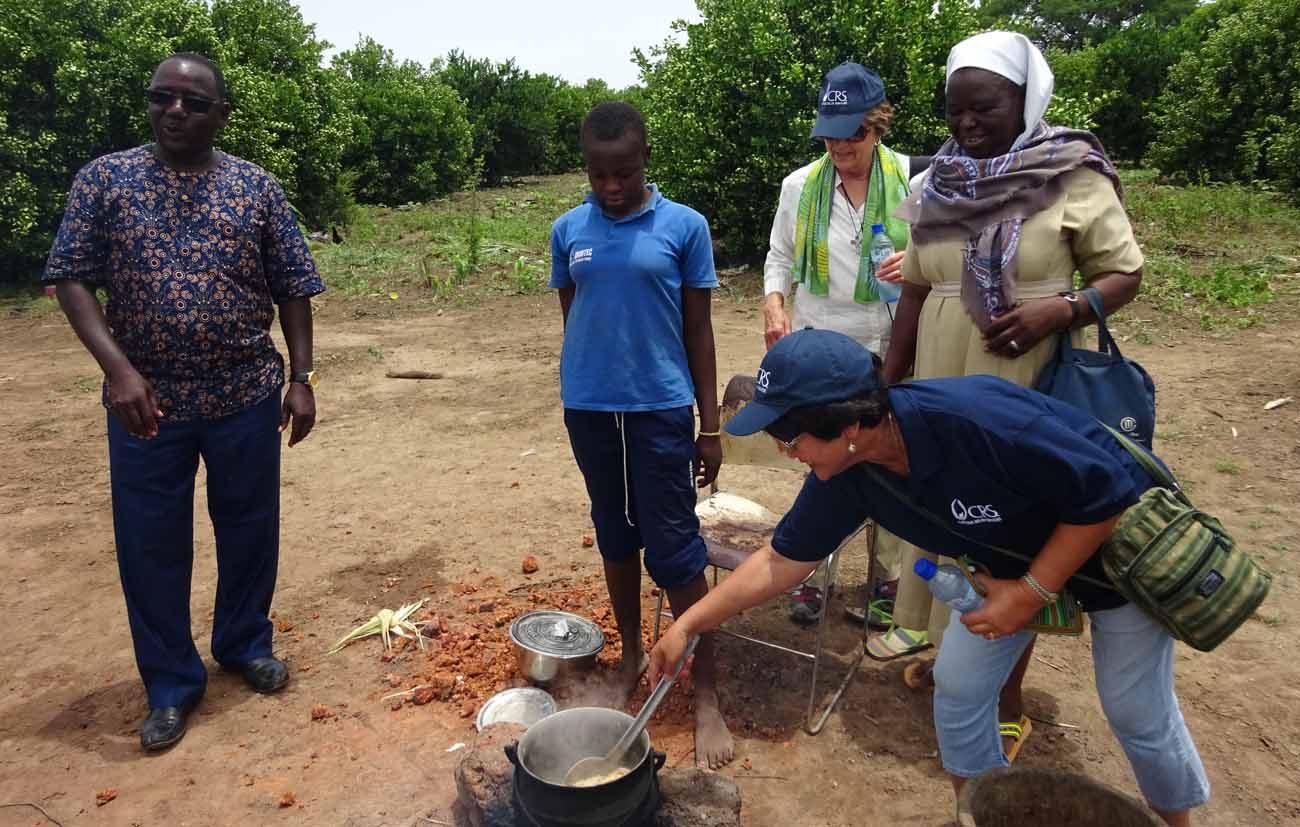 Members of three suburban Philadelphia parishes had a chance to see firsthand how their generosity helps those in western Africa.

The delegates were part of a Catholic Relief Services (CRS) visit to Burkina Faso July 19-26. All are either CRS parish ambassadors or active in CRS parish programs.

“We are excited about the ways they will be able to share their story with the people of the Archdiocese of Philadelphia,” said Anne Ayella, who is the Philadelphia diocesan director for CRS.

Burkina Faso — a semi-arid, relatively small African nation — is one of the poorest countries on earth. A former colony, its official language is French, although most of the people only speak local tribal dialects.

The group of nine delegates consisted of two CRS staffers plus seven ambassadors — three from Philadelphia, two from Kentucky and two from California.

In Ouagadougou, the capital, the group visited the large warehouse that stores food for the CRS Helping Hands program, through which parish volunteers package freeze-dried meals for distribution overseas. The initiative also promotes sustainable farming. 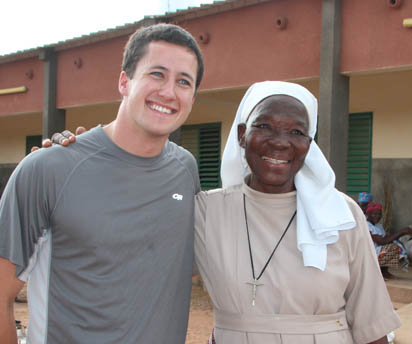 Levi Keene, a parishioner of St. Monica Parish, Berwyn, visits with Sister Consolé at the Delwende center, a home for women accused of witchcraft and ostracized from their communities. The center receives meals packed by parishioners in the United States and distributed by CRS. St. Monica’s has packed 131,544 meals for Burkina Faso over the past three years. (Photo by Zacharie Yameogo, Catholic Relief Services)

Norma Yabut, who coordinates a CRS Helping Hands program at St. Vincent De Paul Parish in Richboro, was moved by her visit to the Delwende Center, a shelter for women accused of witchcraft.

“They are shunned by society and their own families,” she said. “Some have been there for 50 years. They looked so sad.”

Although it is a largely Muslim nation, Burkina Faso has a number of animists who hold to traditional beliefs, along with a sizable Christian community.

“Our church has really made a difference through CRS,” said Yabut, a retired nurse. “There is a lot of sharing, with Muslims and Catholics working together.”

In one village, the Christian community purchased prayer rugs for their Muslim neighbors so they wouldn’t have to kneel in the mud to pray.

‘The same hopes and joys,’ but unique problems

Levi Keene, a member of St. Monica Parish in Berwyn, was struck by the common needs and aspirations beneath the cultural differences.

“It was realizing how similar all of us are regardless of socio-economic conditions,” said Keene, who coordinates Catholic Young Adults of Chester County. “We all have the same hopes and joys. They don’t just want to be able to draw clean water, they want to send their kids to school and they can’t do that.”

Since Burkina Faso does not have free public education, many people cannot afford to send their children to school, resulting in a very high illiteracy rate.

“They haven’t been able to help because of the pervasive poverty,” he said.

Lois Heist, a retired educator, is a member of St. John the Evangelist Parish in Morrisville, where she coordinates a number of CRS activities, including the Rice Bowl program. 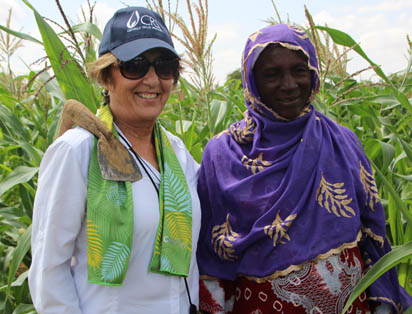 Lois Heist of St. John the Evangelist in Lower Makefield stands with a beneficiary of the CRS Helping Hands program in Burkina Faso. The meal packing program feeds the farmers of the community and allows them to plant corn and onions to sell in the market, generating income for families. (Photo by Zacharie Yameogo, Catholic Relief Services)

During the trip, Heist served as an interpreter, translating the guides’ French explanations into English.

While visiting an orphanage, Heist marveled how well the nun in charge used the materials supplied to her by CRS. “It’s quite wonderful how resourceful the people are,” she said.

The group also visited the Kaya Center, which shelters girls seeking to escape slavery and forced marriage, both of which still exist in Burkina Faso.

Heist was impressed by the courage of the teens, who often walked six hours to reach the center and stayed for years.

“I’m amazed that a girl that young might have the wherewithal and the instinct to take the situation into her own hands,” she said.

At another CRS site, the delegates met Adama, who was determined to see her six children educated. Although herself illiterate, she was especially proud that her oldest son will be going to high school.

Adama will be featured by CRS in next year’s Rice Bowl campaign.

Tales of hospitality for folks back home

The delegation members were touched by the measure of hospitality they encountered.

At about seven locations, the villagers chased down a chicken from their very small flock and presented it to the visitors.

The group donated the birds to facilities for children, but will take home a more profound gift.

“My goal is to go back to the parish and share stories and maybe touch people,” Keene said.

Heist plans to use her experience from the trip to start a Helping Hands program at St. John the Evangelist. “I will be able to show people pictures of the warehouse and people cooking the meals we send,” she said.

Simone Blanchard, CRS’s manager of ethical trade programs, was one of the staff on the visit.

She explained that CRS “works in about 100 countries around the world, and we work with the most vulnerable.”

“The trip was amazing,” she said. “I think those who went took away a very real appreciation of the work of the church in action and learned a little more about being in solidarity with the poor and the disfranchised.” 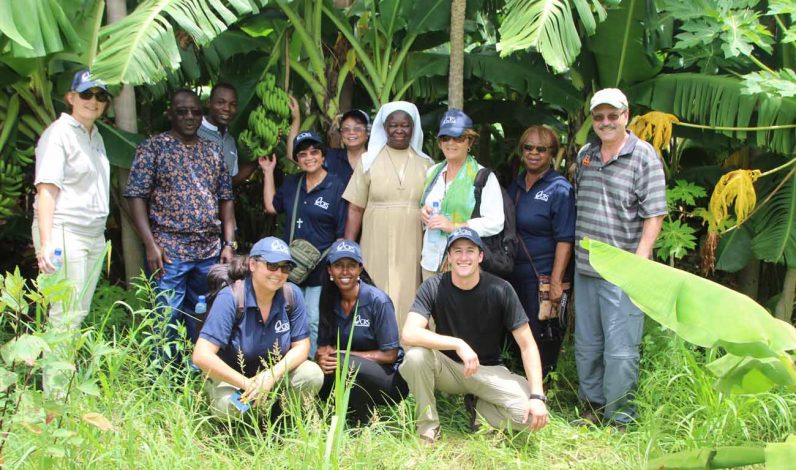 Members of the CRS delegation to Burkina Faso stand with Sister Bernadette (center) in the banana and orange plantation she founded with development assistance from Catholic Relief Services. Funds generated from selling the fruit support 214 orphans and vulnerable children at the Immaculate Conception orphanage. (Photo by Zacharie Yameogo, Catholic Relief Services)

PREVIOUS: It’s ‘all hands on deck’ for addiction awareness in Bucks County

NEXT: Auxiliary appointed for Ukrainian Catholic Archeparchy of Philadelphia