They listened for God’s voice in the New Mexico wilderness 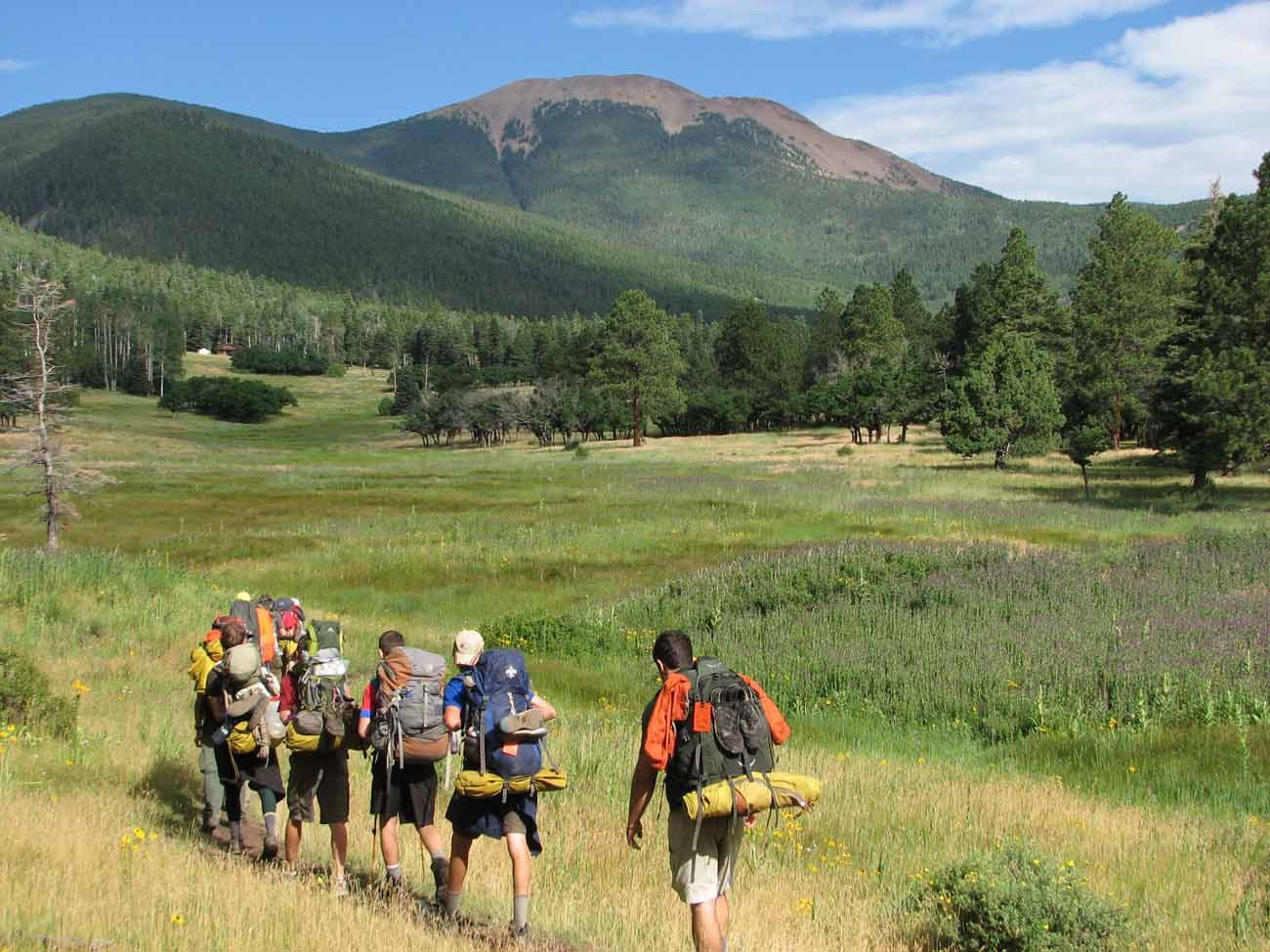 A crew of Boy Scouts hikes through a meadow in the Sangre de Cristo Mountains, and Mount Baldy in the distance, in northeastern New Mexico during the St. George Trek scouting excursion in July.

Five young men from the Philadelphia Archdiocese joined a group of some 100 participants, including a bishop, several priests and seminarians for two weeks in July exploring the Sangre de Cristo Mountains of northeastern New Mexico.

What brought the group together was the biannual St. George Trek held at Philmont Scout Ranch. The outdoor retreat with a focus on vocational discernment is named for the patron saint of scouting. The program, which is sponsored by the National Catholic Committee on Scouting, entails hiking about 70 miles through mountainous backcountry.

Participants are assigned to crews that include 10 scouts, a seminarian and a priest. One of the crews is all-female, consisting of young ladies who are part of the Venturing program and Benedictine sisters.

Collin O’Neill, 17, of St. Andrew Parish in Newtown, was elected by his peers to serve as crew leader of his group of 10 scouts. “The highlight for each day of the trek,” said O’Neill, “was Mass.”

Meeting scouts from different parts of the country was another enjoyable aspect of the experience.

“I was able to learn about them, their life, and their walk with Christ, which in turn has helped me with my walk with Christ,” O’Neill said. “By the end of the trek, we were no longer strangers, but brothers.” 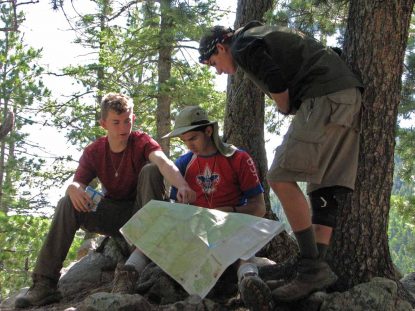 Collin O’Neill (left), a member of St. Andrew Parish in Newtown, reviews a map of the area with two members of the 10-scout crew for which he was the leader during the St. George Trek retreat.

Benjamin Braun, 16, is a member of St. Maria Goretti Parish in Hatfield. The element of the program that most affected him was a period of eucharistic adoration at the midpoint of the trek.

“As I knelt in the presence of our Lord, I felt at peace for the first time in years.  I felt free,” he said. Braun also sensed the voice of God speaking in various ways, such as the beauty of the land, the fellowship of his crewmates and the silence of the backcountry.

For Joseph Kroszner, 16, a member of St. Agnes Parish in Sellersville, the best spiritual moment of the trek involved climbing the Tooth of Time, an iconic rock formation at Philmont that once served as a landmark along the Santa Fe Trail.

Standing atop the 9,003-foot peak reminded him “how large the world is compared to me.” Perhaps more profoundly, it also impressed upon him “how small everything is in comparison to God’s love for his creation,” Kroszner said.

Scouting is one of the most widely utilized forms of youth ministry in Catholic parishes. Catholic churches sponsor more than 7,500 Cub Scout packs, Boy Scout troops and Venturing crews in the United States. These units, in turn, serve almost 250,000 scouts. Encouraging young people to fulfill their duty to God is one of scouting’s chief goals.

The St. George Trek is one of the most unique opportunities available to Catholic Boy Scouts because it gives them the chance “to combine a love of the outdoors with faith,” O’Neill said.

The trek was established in 1992, so this year’s participants received special shirts, patches and belt buckles to mark the 25th anniversary of the program.

Spirituality and hiking have been key elements of the St. George Trek since its inception, but the program also incorporates other forms of outdoor adventure. Crews are able to participate in such activities as rock climbing, black powder rifle shooting and tomahawk throwing. 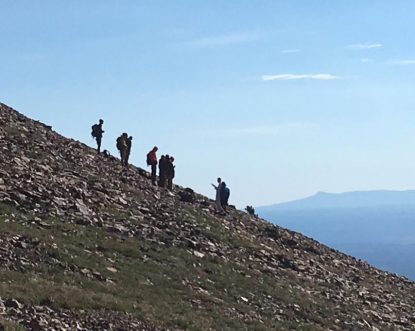 Father David Friel celebrates Mass for Catholic Boy Scouts on a slope of the 12,000-foot Mount Baldy in New Mexico.

Fundamental to the St. George Trek is the personal interaction it fosters between young people and priests, sisters and seminarians. The days spent in the wilderness provide ample opportunity for questions, answers and discussions about vocations. For Braun, the trek also offered a welcome rest from computer screens and cell phones.

The time spent away from the comforts of home, while difficult for the scouts in some respects, was fruitful in other ways.

“When you take a break from ‘the world,’ you can see how God is at work in your life,” O’Neill said. “Being separated from electronics, friends and even family helped me to hear God’s voice more clearly.”

Now that they are home, the challenge for these scouts is to remain attentive to God’s voice, trusting that he speaks in Pennsylvania just as surely as he does in New Mexico. 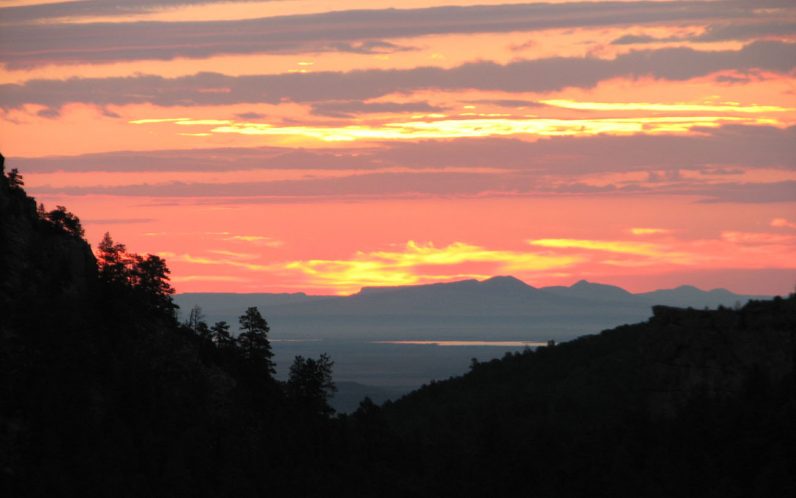 The approximately 100 participants of the St. George Trek saw this stunning sunrise in New Mexico before heading out from the Philmont Scout Ranch and a day of hiking.

NEXT: Blind priest of Allentown Diocese sees no obstacle in serving his flock