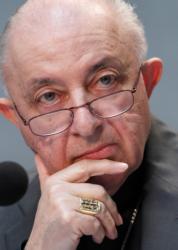 VATICAN CITY (CNS) — Cardinal Dionigi Tettamanzi, whom Pope Francis described as one of the Archdiocese of Milan’s “most illustrious sons and one of its most loving and beloved pastors,” died Aug. 5 at the age of 83.

The former archbishop of Milan and prolific writer on themes related to family life and to bioethical issues was described by Italian media as being “small in stature, but big in heart.”

In an unusually long message of condolence to the people of the archdiocese, Pope Francis said Cardinal Tettamanzi gave a joyful witness to the Gospel and “distinguished himself as an attentive pastor, totally dedicated to the needs and good of his priests and all his faithful.”

Cardinal Tettamanzi was long considered one of the most authoritative voices in the Italian Catholic Church, and his appointment to the College of Cardinals in 1998 immediately put him near the top of Italian pundits’ list of possible future popes.

He had served as general secretary of the Italian bishops’ conference in the early 1990s, winning a reputation as a wise leader, a negotiator and a pastor in touch with the real problems of society.

Born March 14, 1934, in Renato, Italy, near Milan, he began his studies for the priesthood at a minor seminary at the age of 11. He earned a degree in theology from the Pontifical Gregorian University in Rome and was ordained to the priesthood in 1957. His doctoral dissertation focused on “the apostolate of the laity.”

Returning to Milan, he taught moral theology in the archdiocesan seminary and served as an adviser to the Milan chapter of the Association of Catholic Physicians.

Cardinal Tettamanzi’s death leaves the College of Cardinals with 223 members, 121 of whom are under the age of 80 and eligible to vote in a conclave.

NEXT: Pezzullo, former diplomat who was first layman to head CRS, dies at 91