Pezzullo, former diplomat who was first layman to head CRS, dies at 91 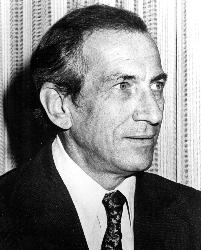 Lawrence A. Pezzullo is pictured in an undated photo. (CNS files)

BALTIMORE (CNS) — Lawrence A. Pezzullo, a career diplomat who became the first layman to head Catholic Relief Services, died at his home in Baltimore July 26. He was 91.

Pezzullo was executive director of CRS, the U.S. bishops’ overseas relief and development agency, from 1982 to 1992.

Coming to CRS after a career in the U.S. Foreign Service, Pezzullo is credited with taking the agency “to a new level of professionalism and impact,” said a tribute to him posted on the CRS website.

“Under Pezzullo, CRS initiated everything from full computerization to a merit-driven personnel system to strategic planning initiatives,” it said. “He gave CRS critical leadership to ensure funding for a major response to the famine in Ethiopia in 1983.”

As the agency’s fifth executive director, he also oversaw the move of CRS’ headquarters from New York to Baltimore in 1989.

“Larry Pezzullo lived a life of exemplary service, to his country, to the church, and to the poor and oppressed around the world. Please join us in praying for him and his family,” the tribute said.

When CRS marked its 50th anniversary in January 1993, Pezzullo told those gathered for the occasion: “CRS is always learning and changing as the world changes. The end of the Cold War brought a different world and many new problems have emerged.'”

CRS is all over the world, he noted, even in such war-torn places as Liberia and Somalia.

“But we are nonpolitical,” he said. “We’re pushing only for human beings to live out their destinies with respect.”

A New York native who went to Columbia University, Pezzullo was ambassador to Uruguay from 1977 to 1979. In 1979 he was named ambassador to Nicaragua where he helped usher the dictator Anastasio Somoza from power. He left that job in 1981 and a year later went to CRS.

In March 1993 he returned to the Foreign Service, because President Bill Clinton named him special envoy to Haiti. He resigned from the post in April the following year.

He later became an adjunct professor at Goucher College in the Baltimore suburb of Towson and he lectured widely.

Born May 3, 1926, in New York to Italian immigrant parents, Pezzullo attended high school in Levittown, New York. He served in the U.S. Army from 1944 to 1946. He earned a bachelor’s degree in history from Columbia in 1951 and taught high school for several years. In 1957, he joined the U.S. Foreign Service.

From 1962 to 1965, Pezzullo was general services officer in what was Saigon, now called Ho Chi Minh City, Vietnam. He was a political officer in La Paz, Bolivia, from 1965 to 1967; in Bogota, Colombia, from 1967 to 1969; and in Guatemala from 1969 to 1971. He attended the National War College from 1971 to 1972. For the next two years, Pezzullo was at the Office of Central American Affairs at the State Department, first as international relations officer, then deputy director.

From 1974 to 1975, he was a special assistant to an ambassador-at-large at the State Department.

Before he was named ambassador to Uruguay in 1977, he spent two years as deputy assistant secretary of state for congressional relations.

He is survived by his wife of 67 years, Josephine; two sons, Ralph M. Pezzullo of Los Angeles and David Pezzullo of Naples, Florida; a daughter, Susan Pezzullo-Johnston, also of Naples; and seven grandchildren.