A celebration of life in the Bible 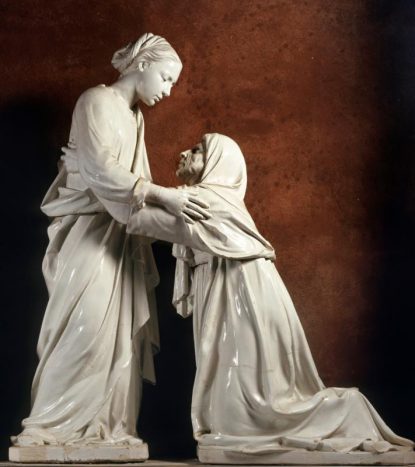 “The Visitation,” circa 1445, which was created by Luca della Robbia, was featured in an exhibit at the National Gallery of Art in Washington. The Bible contains great examples that highlight the value of life. Consider the moment Elizabeth and Mary, both miraculously pregnant, met at the visitation. (CNS photo/courtesy National Gallery of Art)

When we think about the Respect Life cause in biblical terms, we probably recall the phrase from Deuteronomy that has become a popular pro-life slogan, “Choose life” (Dt 30:19). It’s a pointed and comprehensive phrase that reflects the pro-life message about valuing all human life.

However, the Bible contains other great examples that highlight the value of life.

Consider the moment Elizabeth and Mary met at the visitation. Both women were miraculously pregnant — Mary, by the virginal conception of Jesus, and Elizabeth after having been declared barren. The recognition of the precious lives within them caused the child within Elizabeth’s womb to leap for joy (Lk 1:41).

Abraham’s wife, Sarah, also was barren. When three of God’s messengers told her that she would soon become pregnant, she laughed. Their response was, “Is anything too marvelous for the Lord to do?” (Gn 18:14). Indeed not. The next year, Sarah gave birth to Isaac and from Isaac sprang forth the 12 tribes of Israel.

There’s one biblical mother who often is overlooked — the mother of Moses, Jochebed. When Pharaoh ordered the slaughter of all Hebrew baby boys, Jochebed made a heroic move to save the life of her baby boy. She crafted a basket out of reeds and set her baby boy afloat in it on the Nile River in hopes that some kind person would find the child and care for him.

The basket was discovered by Egypt’s princess, who adopted the boy and raised him as her own. But not before Moses’ sister convinced the princess to appoint Jochebed to be his nurse. Consequently, he became a great prophet who led the Israelites out of Egypt and later presented them with the tablet containing the Ten Commandments.

The story of Hannah, wife of Elkanah, is touching. In addition to suffering the shame of her barrenness (large families were considered a sign of God’s favor), Hannah was mercilessly taunted by Elkanah’s other wife.

In her misery, she went to the temple to pray. She prayed so fervently that Eli the priest accused her of being drunk! Eli was moved by Hannah’s explanation and said, “Go in peace, and may the God of Israel grant you what you have requested” (1 Sm 1:17).

God did grant Hannah’s request, giving her a beautiful baby whom she named Samuel. In her gratitude, she took the boy to the temple and gave him back to God, presenting him to Eli for training as a priest. Samuel became the last of Israel’s judges and the first of its prophets. God’s goodness to Hannah didn’t stop there. After Samuel, she gave birth to five more children — three boys and two girls.

These examples are only a sample of the way life was not only chosen, but fully celebrated in the Bible. The preciousness of life in the womb and until natural death is a joyful song that echoes throughout the pages of both the Old and New Testament. It’s a song we join as we observe Respect Life Month.

PREVIOUS: Pray to archangels for protection from devil, pope says

NEXT: Domestic abuse: A parish response