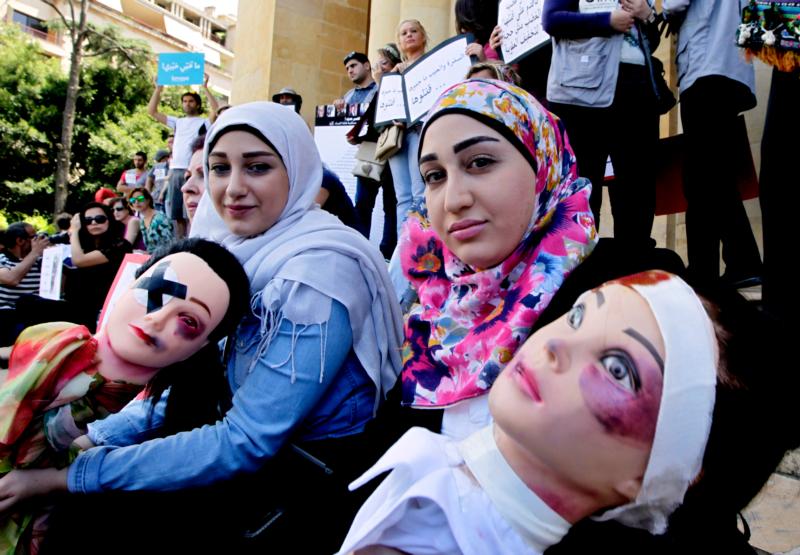 Protesters carry mannequins showing signs of domestic violence in Beirut. Domestic abuse occurs in all socio-economic, cultural and faith groups. As places of faith, compassion and respect for life, parishes are in a unique position to raise awareness about domestic abuse and support families as they find help. (CNS photo/Nabil Mounzer, EPA)

As places of faith, compassion and respect for life, parishes are in a unique position to raise awareness about domestic abuse and support families as they find help. But misinformation and a hesitancy to talk about such a tough issue can make this challenging.

Catholics for Family Peace Education and Research Initiative, housed at The Catholic University of America within the National Catholic School of Social Service, was formed to help parishes respond to domestic abuse in an “informed, compassionate way,” said director Sharon O’Brien.

The initiative helps parishes raise awareness about domestic violence through the prism of faith, providing flyers and other materials, clergy and staff training, and clarifying misinformation about the problem.

“Domestic abuse is not a marital disagreement,” said O’Brien. “It is when one person assumes control over another person in an intimate relationship. The other person is trying to figure out how to get out of that relationship.”

Abusive control can be through physical violence and/or include psychological coercion such as isolation, economic abuse and using intimidation or children as a means to gain and keep control.

O’Brien said, “One in four women and one in seven men will be victims of severe physical violence by an intimate partner. In families where there is domestic abuse, 50 percent of the time, children are also abused.”

Domestic abuse occurs in all socio-economic, cultural and faith groups.

To help clergy understand how the statistics translate to parish life, Father Dahm said, “I might say to a priest, ‘If you have 500 people at a Mass on Sunday, about one in four are victims of domestic abuse. That’s about 125 people. It’s rampant in our community.”

Speaking from the pulpit on domestic abuse can be the invitation a victim needs to start to seek help.

“Twenty years ago, because I didn’t talk about it, not too many people came to me,” said Father Dahm. “When I started talking about it, I got inundated with people coming to talk to me.”

The U.S. Conference of Catholic Bishops website includes resources for preaching about domestic abuse. One of these is “Suggestions for Preaching about Family Violence,” by Father Tom Johns, pastor at St. John Vianney Church in Mentor, Ohio. He wrote it to help homilists tie in the issue with church teaching.

“Domestic abuse definitely fits in with the Respect Life theme,” said Father Johns. “Every life is created in the image and likeness of God. It’s also a family issue. Two become one and Christ is the center. Nowhere is this truer than in a marriage.

“You hate to see kids exposed to anger in the house. Parents are teaching how to treat people. If you’re not living the faith at home, there’s something wrong.”

Besides raising awareness, preaching about domestic violence can clarify misunderstandings, some of which prevent victims from seeking help and safety.

October is Domestic Violence Awareness Month, as well as Respect Life Month. Parishes can tie these two issues together through bulletin announcements and flyers (available through Catholics for Family Peace) that provide basic information and details on local shelters, counseling, the National Domestic Violence Hotline (1-800-799-SAFE), and focused prayer, especially in the prayer of the faithful at Mass.

“Seeking help does not violate the marriage promise,” O’Brien said. “It’s an actualization that victims and their children are beloved children of God and deserve to be treated with respect.”

PREVIOUS: A celebration of life in the Bible

NEXT: Love both Mom and her baby