Don’t look away; be moved by tragedy and help, pope says 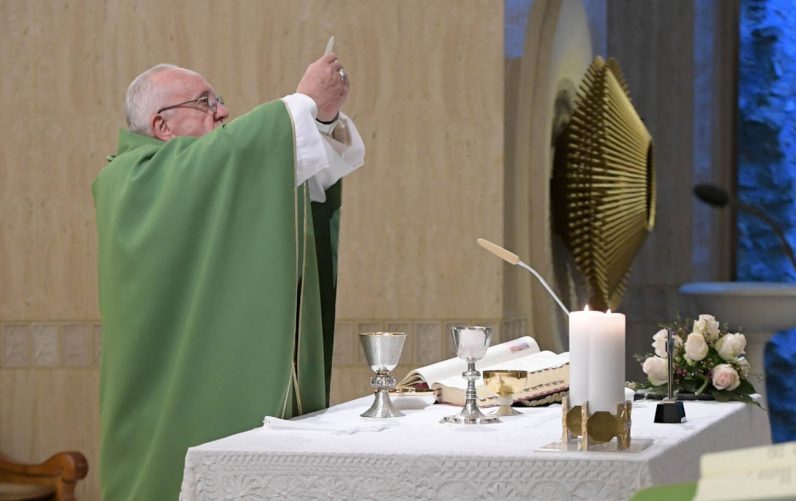 Pope Francis celebrates morning Mass Sept. 19 in the chapel of the Domus Sanctae Marthae at the Vatican. (CNS photo/L’Osservatore Romano)

VATICAN CITY (CNS) — People need to have true compassion so they feel others’ pain and are moved to help, Pope Francis said.

“Compassion is an emotion that engages, it is a feeling from the heart, from the gut,” affecting one’s entire being, the pope said Sept. 19 during morning Mass in the Domus Sanctae Marthae.

Compassion “is not the same as ‘pity’ or (saying), ‘What a shame, poor people …'” but leaving things as they are, he said.

The word “compassion” comes from “compati,” which means to “suffer with,” he said, and this is compassion’s true meaning.

In his homily, the pope reflected on the day’s Gospel reading from St. Luke, which recounted Jesus encountering a widow mourning the death of her only son — her only hope of support and survival.

Instead of worrying about the crowd that had accompanied him and using that as an excuse to move on, Jesus was more concerned about the tragic plight of the widow right in front of him, the pope said.

“Why?” the pope asked. “Because his heart, his whole inner being got wrapped up” in the situation, which drove him to get close and become involved, to reassure the woman and perform the miracle of bringing the son back to life — to restore human life.

God had compassion for his people, went to them through his son, Jesus, and restored their dignity as children of God, “recreating us all,” the pope said.

Christians, he said, must to follow Christ’s example: look at reality, be moved by it and get close to those in need with the aim of restoring their dignity, welcoming them into a community, supporting them so they can live out their daily lives in a dignified way.

Pope Francis asked that people reflect on their reaction when they read or hear news about tragedies, such as starving children, child soldiers or enslaved women.

“Do I turn the page” and move on to tales of romance, “the soap opera that is on next?” he asked. Or “am I able to have compassion? To pray?” so that when one sees or hears about these tragedies, one’s whole being is moved and “the heart suffers with these people.”

PREVIOUS: On Catechetical Sunday, remember we are all disciples on mission

NEXT: Twice divorced woman can seek healing in the sacraments