Love both Mom and her baby 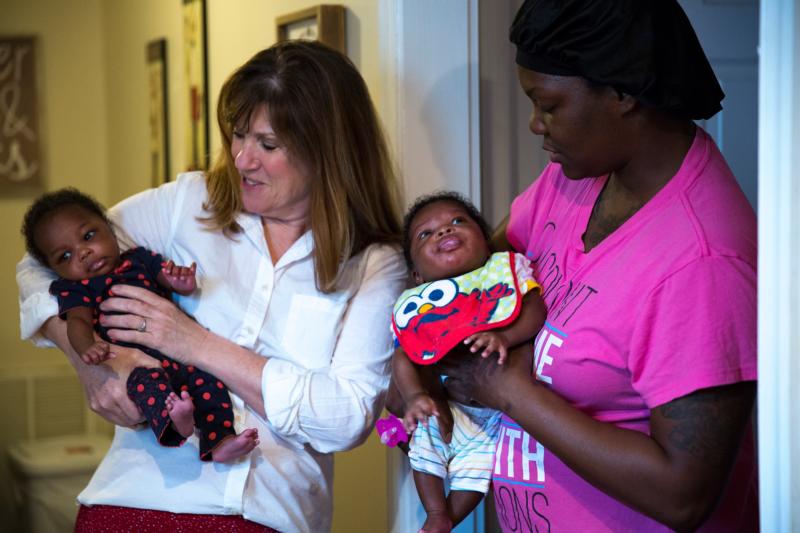 Kathleen Wilson, left, of Fredericksburg, Va., helps a new mother with one of her newborn twins at one of the homes run by Mary’s Shelter, a Catholic organization that provides housing and financial support to pregnant women in crisis. A truly pro-life attitude rejects any dichotomy between the rights of the baby and the needs of the mother. (CNS photo/Chaz Muth)

In my early high school years, I hung around the hippy crowd. We were all about long hair, rock music and anti-war marches. My English teacher was the coolest teacher at the school. She had us read a new best-seller, “The Population Bomb,” that predicted food shortages and wars due to runaway overpopulation.

She also alerted us to the crisis many women face who get pregnant unexpectedly, when they are not ready to raise a child. And then she told us that many of these women, seeking a solution to the crisis, have recourse to back-alley abortionists who kill some of these women and maim others.

This was 1970 and elective abortion was not yet the law of the land. My teacher and her equally cool husband were leaders of a group called Planned Parenthood that led rallies at our statehouse demanding the choice of safe, legal abortion in such circumstances.

I was more than a nominal Catholic at the time — I’d never miss Mass on Sunday. But I cared about these women in crisis. So I went to one of the rallies. And I bought into the argument that we Catholics “should not impose our religion on others.” Thus, I became “pro-choice.”

A year later, I had an encounter with Christ that changed me from a Sunday Catholic to a budding disciple. I asked Jesus to become the center of my life, to unlock in me the power of his Holy Spirit, to form my life and perspective by his word. Very quickly, without anyone trying to convince me, I just knew that abortion was wrong.

It became clear to me that abortion is the deliberate taking of an innocent human life. The most important role of government is to protect the right to life with special care to protect the most innocent and most vulnerable.

I realized the common sense of Mother Teresa’s logic — legal abortion teaches women and all society that it is legitimate to solve a problem through an act of violence. So clearly, we must work to change abortion law. We need to protect the baby’s right to life.

Yet the problem of the woman’s crisis pregnancy remains. If abortion is not a solution, what is?

A Catholic OB-GYN in Dallas, Gonzalo Venegas, saw panic and fear in the faces of many of his patients when they found out they were pregnant. Some were unmarried. Others were married but struggling to provide for the children they already had. Some had no money or medical insurance.

Others had no support from their partner, parents and friends. Most felt totally unprepared to be good mothers. Consequently, many of these patients asked for a referral to an abortion clinic.

My friend, Dr. Venegas, got an inspiration. Yes, he showed them a sonogram to convince them that what was inside them was a baby, not a blob of tissue. But also, recognizing their fear and sense of inadequacy, he showed them the kind of compassion and genuine concern that broke their sense of isolation and let them know they were not alone.

He, his wife, his staff and volunteers began to work with these women. They assured the women that the cost of prenatal care and delivery would be covered one way or another. They provided clothing, baby formula, car seats and cribs when the baby was born. Most of all, they affirmed these women, helping them to believe that they were strong and could be awesome mothers.

From the beginning, Angels Clinic made the same offer that Mother Teresa used to make to women contemplating abortion — if, after giving birth, you still don’t think you can handle motherhood, give the child to us. We will provide a loving home for your precious child.

Over 1,100 babies have been delivered there over the years, mostly to women who had seriously contemplated abortion. But funny thing … after being strengthened and encouraged by the new community they found at Angels, only a handful decided to put their children up for adoption.

With others’ help, they had overcome their fear and loneliness. Once they had found a new identity as competent women of strength, they were able to embrace their vocation to motherhood with courage, confidence and joy. They had rediscovered their own dignity.

Abortion is not just an affront to the dignity of the child. It is also an attack on the dignity of the woman. It reinforces the fear and sense of incompetence that tells a woman she can’t handle it and leaves her weak and riddled with lingering guilt.

To be pro-life is to say to the mother: “Be not afraid! You are not alone — God and we will walk this journey with you. You are strong! You are beautiful! You be will an incredible mom! You are able!”

A truly pro-life attitude rejects any dichotomy between the rights of the baby and the needs of the mother. The motto of Angels Clinic could be the motto of the entire pro-life movement: “Love them both!”

D’Ambrosio is an author, professor, speaker and media personality.

NEXT: Two months in one: Respect Life and Domestic Violence Awareness