Worst sin is doubting God waits for all sinners to convert, pope says 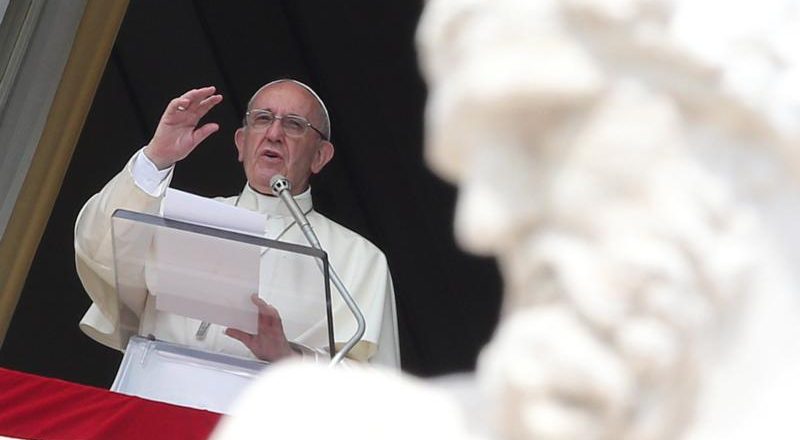 Pope Francis leads the Angelus from the window of his studio overlooking St. Peter’s Square Sept. 24 at the Vatican. (CNS photo/Alessandro Bianchi, Reuters)

VATICAN CITY (CNS) — The worst sin of all is not trusting in God’s infinite love and not believing that God is always waiting for his sinning children to return to him, Pope Francis said.

“He is always at the door, waiting for me to open it just a tiny bit to let him in, and to not be afraid” of past sins getting in the way of conversion, the pope said in a homily Sept. 24.

The pope celebrated Mass in the Vatican garden’s grotto of Our Lady of Lourdes for the Gendarme Corps of Vatican City State, as the Vatican police force is formally known. The Mass came ahead of the Sept. 29 feast day of the security service’s patron saint, St. Michael the Archangel.

Pope Francis told the police officers that the purpose of life is to seek the Lord and to convert, but one must realize it is God who takes the first step to encounter people.

“Our God doesn’t tire of going out to look for us, of letting us see that he loves us” even though everyone is a sinner, he said.

God goes out into the world, sending his son among sinners, and calls out “Come!” the pope said. Even if people respond, “But it’s so late” and there are so many sins, “for God it is never late. Never, ever! This is his logic of conversion.”

“He respects every person’s freedom, but he is there, waiting for us to open the door just a little,” the pope said.

“The worst of sins, I think, is not understanding that he is always there waiting for me, not having faith in this love, distrusting God’s love,” he said.

Later in the day, reciting the Angelus prayer with visitors in St. Peter’s Square, the pope underlined the same theme based on the day’s Gospel reading of the parable in which Jesus says the kingdom of heaven is like a landowner who goes out from dawn to day’s end looking for laborers for his vineyard. And those who started late in the day receive the same equal pay as those who began early and did more work.

It is difficult for people to understand God’s logic, the pope said, because he is generous and offers salvation freely — not because of merit or because the person worked for it — but because it is a gift.

“It’s about letting oneself be amazed and won over by the thinking and ways of God,” which, “fortunately for us” do not correspond to human ways and logic, he said.

“Human thinking is often marked by selfishness and personal profit, and our narrow and twisting paths are not commensurate to the wide and straight roads of the Lord,” the pope said.

“He uses mercy,” the pope said, “he forgives broadly, he is full of generosity and goodness which he pours over each one of us, he opens to everyone the limitless territories of his love and grace,” which are the only thing that can fill the human heart with the fullness of joy.

NEXT: Readings of the holy Mass – Twenty-sixth Sunday in Ordinary Time