After a glorious history, twin spires of West Phila. church will go silent 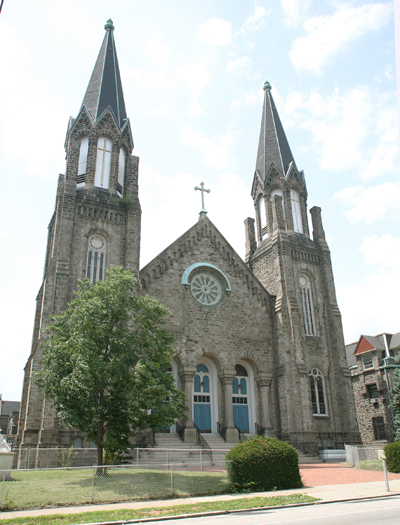 Built in 1870, Our Mother of Sorrows Church has been formally closed by the Archdiocese of Philadelphia, effective October 9, 2017. The West Philadelphia parish was formerly one of the largest parishes in the city.

On September 3, Archbishop Charles J. Chaput announced the closure of West Philadelphia’s Our Mother of Sorrows Church as a worship site of St. Ignatius of Loyola Parish and as a Roman Catholic church.

It has been a worship site of St. Ignatius since 2013, but has not been used for any Masses or funerals since February 2017 because of low attendance.

The formal request to close the worship site originated from the parochial administrator of St. Ignatius of Loyola Parish together with his pastoral and finance councils, the official release stated.

This request was then reviewed by the Archdiocesan Council of Priests and presented to Archbishop Chaput, who after careful review of all supporting factors made the final decision.

The closure, which is effective October 9, means the Our Mother of Sorrows Church building is relegated to profane (secular) use, but not sordid use.

As a result of the merger, all assets and buildings belong to St. Ignatius Parish, which is responsible for all liabilities — for example, the $100,00 spent last year to maintain the vacant property, including the church, school and convent.

Any funds realized from a sale of these buildings will go to St. Ignatius, which is itself operating at a deficit. According to the 2016 October count, the parish has a very modest Mass attendance of 143 persons weekly.

“No one likes to be merged, but it is better to have one strong parish than two weak parishes,” said Msgr. Federico Britto, pastor of the flourishing St. Cyprian Parish in West Philadelphia and parochial administrator of St. Ignatius, which does not have a resident pastor. Msgr. Britto took charge of St. Ignatius last year when the study toward the closing of Our Mother of Sorrows was well underway. Considering the numbers, it was difficult to envision any other solution.

While acknowledging the inevitability of the closing of Our Mother of Sorrows, it would be remiss to let it pass without also paying tribute to its wonderful history.

According to diocesan records, the parish was established in 1852, but its story goes back to 1849 when the area was sparsely settled. Bishop Francis Patrick Kenrick purchased a farm for the purpose of converting it into a burial ground, Cathedral Cemetery.

Also close by was the newly built St. John’s Orphan Asylum, which in its heyday sheltered as many as 700 boys, aged 7 to 14. Young Father James McGinnis was the chaplain at St. John’s, and the Masses he celebrated for the St. Joseph Sisters and the orphans were also attended by a small number of Catholics from the surrounding neighborhood.

But Father McGinnis noticed the gravediggers from the cemetery rarely came, so he started to celebrate a Mass in a cemetery storage shed just for them. Father McGinnis moved on and other priests continued the custom, in  bigger and bigger chapels. Before long there was a parish, named appropriately for its somewhat somber beginnings, Our Mother of Sorrows. The present church was built in the 1870s by Father Francis Sharkey, who also established a school in the basement.

Father Sharkey was succeeded in 1881 by Father John Shanahan, the first in a string of very remarkable parish leaders. In addition to serving as pastor at Our Mother of Sorrows he was the first superintendent of schools for the Philadelphia Archdiocese and under his leadership the schools grew into one of the finest systems in the country, which is why Bishop Shanahan High School was named for him.

Father Shanahan left in 1899 to take up duties as the third Bishop of Harrisburg, a see where his brother Jeremiah had been the first bishop.

By this time, Our Mother of Sorrows was one of the largest and most prestigious parishes in the archdiocese. The next pastor was Father John McCort, a former St. Charles Borromeo Seminary professor. In 1912, he rose to become vicar general and auxiliary bishop for the archdiocese, but continued as pastor of Our Mother of Sorrows until his 1920 transfer to Altoona, first as coadjutor bishop and then bishop.

When Father Edward O’Malley was pastor in 1936, Our Mother of Sorrows School had 1,185 students, according archdiocesan records. To relieve the overcrowding, Father O’Malley erected a new school building. Cardinal Dennis Dougherty, the epitome of an autocrat, immediately decided the archdiocese needed a new high school to relieve overcrowding at West Catholic High School for Boys, more than Our Mother of Sorrows needed a new building.

Father O’Malley dutifully sold the new school to the archdiocese, and it became St. Thomas More High School, which had a brief but distinguished history until its closure in 1975.

Another great pastor was Father James Daly, who served the parish from 1961 until 1988, a period of slow decline. Unlike his famous predecessors, he never received a bishop’s miter, but to most of his people he nonetheless had the halo of a saint.

When the church needed painting and there were no funds, he painted himself.  He started a ministry for men released from prison, and a soup kitchen that continued for years. When less tolerant parishioners refused to accept African Americans, he faced them down.

Father Daly retired after 27 years and was replaced by other zealous priests. These were assisted by equally dedicated women religious and laity, who continued to serve as the old parish dwindled in size.

The last chapter of Our Mother of Sorrows has now been written, but its overall story makes a great book.

NEXT: Archbishop Chaput on the enduring legacy of ‘Veritatis Splendor’