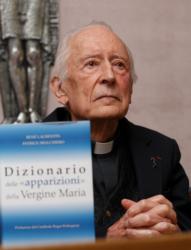 Msgr. Rene Laurentin is pictured in a 2010 photo in Rome. (CNS photo/Paul Haring)

Msgr. Laurentin had published more than 160 books and 1,000 articles about Mariology, including the “Dictionary of the ‘Apparitions’ of the Virgin Mary.”

The 1,200-page volume lists more than 2,400 alleged apparitions of Mary all over the world and provides details about the church’s investigations of them. To this day, only a handful of the claimed appearances of Mary are recognized by the Catholic Church.

“The apparitions are not seen with the most benign eye by the church,” he had said, emphasizing how seriously the church investigates the claims and citing the long approval process of even the most popular visions.

“Apparitions are the least scientifically studied, the most hidden and most controversial of all theological subjects,” the French priest said.

In the introduction to his “dictionary,” Msgr. Laurentin wrote that he had been working for more than 50 years on the catalogue at the request of bishops and the Congregation for the Doctrine of the Faith. The goal, he said, was “to put to rest the many misunderstandings and confusion” surrounding claims of visions.

Msgr. Laurentin, who served as a peritus, or expert, at the Second Vatican Council from 1962 to 1965 and as a religion correspondent for France’s Le Figaro daily, is also the author of “Bernadette of Lourdes: A Life Based on Authenticated Documents,” a highly praised biography of the visionary. He also wrote several books on the alleged apparitions of Mary at Medjugorje, Bosnia-Herzegovina.

“The situation in Medjugorje is very confused because there are conversions every day, but the bishop is against it,” he said in October 2007. “And when Rome protects and covers the bishops, one can’t say Rome is in favor of the apparitions.”

While Pope Francis, too, has expressed some doubts about the Medjugorje apparitions, which allegedly continue, he appointed a Polish archbishop to visit the town and make recommendations about the pastoral care of the townspeople and the millions of pilgrims who visit there each year.

Born in Tours on Oct. 19, 1917, Rene Laurentin was ordained to the priesthood in 1946. In addition to his longtime professorship at France’s Catholic University of the West in Angers, Msgr. Laurentin taught at Catholic universities throughout Europe and, from the early 1960s to the early 2000s, was a visiting professor at the Marian Institute at the University of Dayton in Ohio.

NEXT: SNAP founder and longtime president Blaine dies at 61