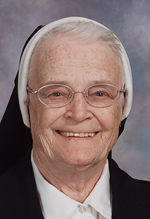 Sister Helena Joseph Balbach, O.S.F., died July 29 in Assisi House, Aston, at age 95. She had been a professed member of the Sisters of St. Francis of Philadelphia for 73 years.

Sister Helena Joseph (Elizabeth Margaret Balbach) was born in Wilmington, Delaware where she was a member of St. Thomas Parish and a graduate of Wilmington High School. She entered the congregation in 1942 and professed her first vows in 1944. Her sister, Sister Trinita Balbach (now deceased) was also a member of the congregation.

The funeral Mass was celebrated Aug. 2 at Assisi House, with burial in Our Lady of Angels Cemetery in Aston.

Sister Helena Joseph is survived by her sister, Frances Balbach; by her nieces and nephews, and by her Franciscan family. Donations in her name can be made to the Sisters of St. Francis Foundation, 609 S. Convent Road, Aston, PA 19014.