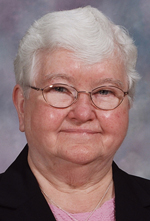 Sister Ellen Mary Meskill, O.S.F. (formerly Sister Mary Assisium), died July 20 in Assisi House, Aston, at age 84. She had been a professed member of the Sisters of St. Francis of Philadelphia for 65 years.

She was born in Mt. Russell, Charleville, in County Cork, Ireland. She entered the congregation in 1947 and professed her first vows in 1952. Her sisters, Sister John Helene (now deceased) and Sister Geralda also entered the congregation. Sister Ellen Mary earned a B.S. in education from Maryhurst College in Portland, Oregon, and an M.A. in education from Gonzaga University in Spokane, Washington.

Sister Ellen Mary’s 22 years of ministry in the Archdiocese of Portland, Oregon, included teaching at St. James School in McMinnville as well as Blessed Sacrament School and St. John Fisher School, both in Portland. She also ministered at the Franciscan Renewal Center in Portland where she prepared meals both for those who came to the center for renewal programs and for people who were homeless.

During her 20 years in the Archdiocese of Philadelphia, Sister Ellen Mary worked at Assisi House, the congregation’s retirement residence in Aston, served in local house ministry in Our Lady of Angels Convent and worked as a volunteer receptionist at Neumann University.

In 2016 she moved to Assisi House where she served in prayer and hospitality ministry until her death.

The funeral Mass was July 25 at Assisi House with burial in Our Lady of Angels Cemetery in Aston.

In addition to Sister Geralda, Sister Ellen Mary is survived by two brothers, John and Pat Meskill, by her many nieces and nephews, and by her Franciscan family. Donations in her name can be made to the Sisters of St. Francis Foundation, 609 S. Convent Road, Aston, PA 19014.