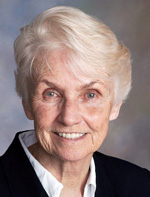 Born in Philadelphia, Sister Rita entered the Congregation of the Sisters, Servants of the Immaculate Heart of Mary in 1961 from Our Lady of Mount Carmel Parish in Philadelphia, and professed her vows in 1964.

She taught in elementary and secondary schools in the Archdiocese of Philadelphia.  Sister Rita also served as IHM Director of Religious Education and in pastoral ministry.   Her last assignment was at Daylesford Abbey Spirituality Center, Paoli.

Sister Rita is survived by members of her religious community, her brother Paul Devine and her sister-in-law Virginia Devine.

Sister Rita was predeceased by her parents, Edward and Rita Hetherington Devine, brothers Edward and Eugene, and nieces and nephews.

PREVIOUS: Father James McVeigh , friend to many priests, dies at 70