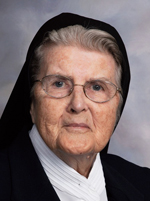 Sister Anne Fidelis Tumelty, I.H.M., died July 6 in Camilla Hall, Immaculata, in the 65th year of her religious life. She was 88 years old.

Born in Norristown, she entered the Congregation of the Sisters, Servants of the Immaculate Heart in 1952 from St. Philomena Parish in Lansdowne, and professed her vows in 1955.

Sister Anne served in elementary schools and religious education in the Archdiocese of Philadelphia and the Dioceses of Allentown, Arlington, Camden and Richmond.  She retired to Camilla in November 2001.

The funeral Mass was celebrated at Camilla Hall on July 11. The celebrant and homilist was Father William E. Dean. The concelebrants were Msgr. Joseph Logrip and Father Edward Lyons.

Sister Anne is survived by members of her religious community, her sister-in-law Ann Tumelty, loving nephews and nieces, grandnephews and grandnieces.

She is predeceased by her parents, Joseph A. and Anna B. Touey Tumelty, and a brother, Joseph.