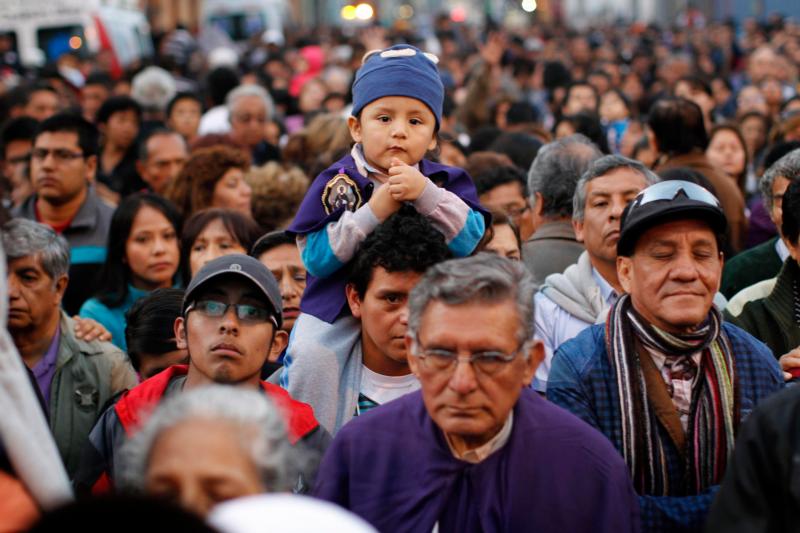 People gather in Lima, Peru, Oct. 19, 2014, to celebrate the “Lord of the Miracles.” The devotion is organized by a lay confraternity — a characteristic of popular religious devotions. (CNS photo/ Enrique Castro-Mendivil, Reuters)

Three times during October, tens of thousands of people pour into the narrow downtown streets of Lima, Peru, accompanying the figure of the Lord of the Miracles in a procession around the city. The devotion, one of the largest in Latin America, is also celebrated in cities such as Los Angeles and Rome.

“In Latin America, popular piety is part of the culture,” says Rafael Luciani, a Venezuelan lay theologian at Boston College. “There is a personal relationship between the person and God through the image that is carried in a procession or is in the church or the home.”

Although the relationship is personal, it is celebrated in community.

“It’s not something that’s done in private,” Luciani says, “because people don’t understand religion as being separate from the rest of their lives.”

The Lord of the Miracles devotion dates to the mid-1600s, when an African slave painted a crucifixion scene on a wall in Lima. The archbishop sent workers to destroy, erase or paint over the image, but each effort was miraculously frustrated.

In 1687, a violent earthquake leveled the city but left the wall with the image unscathed. The devotion received official approval, and for centuries, a replica of the original image has been carried in procession every October. The devotion is organized by a lay confraternity — another characteristic of popular religious devotions, Luciani says.

Other countries have their own devotions — Our Lady of Guadalupe in Mexico is one of the best known — and local devotions may draw even more faithful than the more famous celebrations.

Processions, whether around the neighborhood or to a distant pilgrimage site, are a mainstay of popular devotions.

“The person goes along, telling God about their problems or their joys, and they join their everyday life to that relationship with God,” Luciani says.

In Africa, religious celebrations often are accompanied by music and dancing, says Liz Mach, who has worked in Tanzania for most of her 41 years as a Maryknoll lay missioner.

The Sunday liturgy may last several hours, with singing, clapping and the trilling sound that women make with their tongues to express joy.

Pilgrimages are the more serious side of celebration, she says.

A pilgrimage site more than six kilometers from her home in Musoma commemorates the arrival of the first missionaries to the diocese more than a century ago.

“The long, hot, dusty walk to a pilgrimage site reciting the rosary is something parishes and groups do together,” Mach says. “Youth often make these journeys.”

In Manila, in the Philippines, hundreds of thousands of Catholics throng the streets in January, trying to get close enough to touch the Black Nazarene, a wooden statue of Christ carrying the cross, which dates to the early 1600s.

Kissing, holding or touching the statue is “connecting to the divine, to touch and be touched by heaven itself,” Msgr. Jose Clemente Ignacio of the Minor Basilica of the Black Nazarene in Quiapo, Manila, told the Philippine Daily Inquirer in 2013.

Pastors in U.S. parishes where immigrants settle must recognize that religious traditions vary from country to country, even in the same part of the world, Luciani says. Although Guadalupe is well-known, for example, it is mainly a Mexican devotion.

“Pastors must understand that this is part of (people’s) culture,” Luciani says of popular devotions. “That’s a challenge for the church in places that are multicultural.”

Fraser is a freelance journalist based in Lima, Peru.

PREVIOUS: We’ve been invited to a royal wedding, and proper attire is required

NEXT: A devotional life will not leave us as it found us