A devotional life will not leave us as it found us 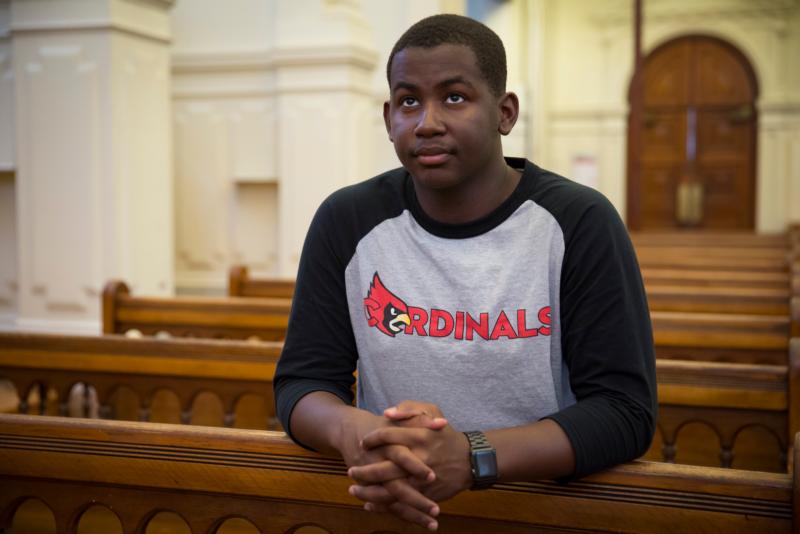 Catholic University of America student Isaiah Burroughs takes time for private prayer May 2 during exam week in one of the Washington campus’s chapels. The U.S. Catholic bishops explained in a 2003 document that “popular devotional practices do not replace the liturgical life of the church; rather they extend it into daily life.” (CNS photo/Chaz Muth)

An older man, out in the morning for his first mile-and-a-half walk of the day, silently recites the Jesus Prayer: “Lord Jesus Christ, Son of God, have mercy on me” — or, “have mercy on me, a sinner.”

At about the same time of day, a mother and her toddler are driving to their parish to participate in its biweekly mothers’ group. Prayer, spiritual reflection and conversation about parenthood’s challenges and rewards lie at the heart of such groups’ activities.

Each of these people is involved uniquely in the devotional life, which today assumes countless forms among Catholics. “There is no one Catholic spirituality or way of approaching God in ascetical practices, prayer forms or devotions,” U.S. Cardinal Kevin Farrell once said.

During his walk, the older man may recite the Jesus Prayer 10 times, now and then altering its words somewhat. Thus, he asks Jesus to bestow mercy not just “on me,” but “on us,” as his thoughts turn to others whose needs equal and outweigh his own.

Like a mantra, this prayer focuses his attention, calling to mind the Lord’s faithful presence and companionship. He recalls that Jesus, after the Resurrection, “drew near and walked with” two disciples making their way to the town of Emmaus (Lk 24:15).

This recollection extends his prayer into the surrounding world. He begins naming others who gladly might welcome Jesus’ companionship. Or he shifts attention to a small group of fellow parishioners who that very day are devoting their prayers and supportive energies to the care of yet another parishioner whose health has veered startlingly off course.

Such service to a sick person possesses the capacity to become prayerfully devotional, forming a small community of faith among concerned friends. In his 2013 apostolic exhortation “The Joy of the Gospel,”Pope Francis spoke of devotions that “are fleshy” and “have a face,” and that neither are “detached from responsibility for our brothers and sisters” nor “divorced from” a larger community.

Parish groups for mothers might not seem at first glance like an expression of the devotional life. Yet they tend to couple prayer with spiritual reflection and conversation centered on the concrete circumstances parents face. They offer opportunities to explore the parental, Christian vocation.

Such groups help to extend the Sunday Eucharist into the days of the week, as their members nourish each other and share parenthood experiences in compassionate, supportive ways.

The U.S. Catholic bishops explained in a 2003 document that “popular devotional practices do not replace the liturgical life of the church; rather they extend it into daily life.” The bishops affirmed that “what is crucial is that popular devotions be in harmony with the liturgy, drawing inspiration from it and ultimately leading back to it.”

Like many devotions, “lectio divina” can be practiced alone or with others. A married couple might pray and meditate together in this way, as might a prayer or retreat group.

Basic to “lectio divina” is the conviction that God addresses us through Scripture. To get started, it is only necessary to select a biblical passage to spend time with — perhaps the good Samaritan parable (Lk 10:29-37) or a familiar biblical phrase like “God so loved the world that he gave his only Son” (Jn 3:16).

Pope Benedict XVI outlined the four simple steps of “lectio divina” in “The Word of the Lord,” his 2010 apostolic exhortation.

“Lectio divina” opens “with the reading (‘lectio’)” of a biblical passage, he noted. One asks, “What does the biblical text say in itself?”

The second step is to meditate on the text and ask, “What does the biblical text say to us?” Pope Benedict explained that here each person “must let himself or herself be moved and challenged.”

Prayer is the third step, he continued. Its question is, “What do we say to the Lord in response to his word?” Or, what is our prayer now?

Contemplation is the fourth step. It aims “at creating within us a truly wise and discerning vision of reality as God sees it” and “forming within us ‘the mind of Christ.'”

Thus, a desire to view others and the world through God’s eyes is a goal of “lectio divina.” Naturally, this desire prompts us to expand as persons. A devotional life does not leave us as it found us.

I presume that this aim of “lectio divina” is an aim of most, perhaps all, devotions — like the Stations of the Cross, prayers to a particular saint whose example is energizing and motivating, eucharistic adoration, novenas, the rosary and other Marian devotions.

In “lectio divina,” Pope Benedict wrote, we overcome “our deafness to those words that do not fit our own opinions” and we allow ourselves to “be struck by the inexhaustible freshness of God’s word.”