Think about what you say in the Our Father, pope advises 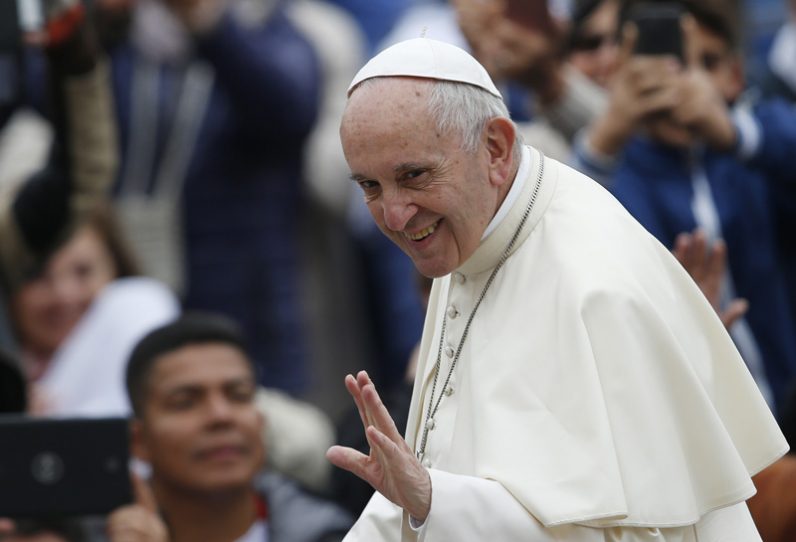 Pope Francis greets the crowd during his general audience in St. Peter’s Square at the Vatican Oct. 18. (CNS photo/Paul Haring)

VATICAN CITY (CNS) — To pray the Lord’s Prayer and believe what one is reciting takes real courage, Pope Francis said.

One must be bold “to truly believe that God is the father who accompanies me, forgives me, gives me bread, is attentive to everything I ask,” Pope Francis said in a filmed conversation about the Our Father.

The original idea for the project was that Father Pozza would explain the Our Father phrase by phrase and discuss its meaning and implications with a handful of famous Italians from the world of culture and entertainment.

But, the priest told reporters at a news conference, when he told one of the prisoners in Padua about it, the man said, “If he knew about it, Pope Francis would participate, too.”

“At first, I didn’t take it that seriously,” Father Pozza said, “but then I wrote to the pope.” A few days later the pope phoned him and the project was transformed.

In the program’s trailer, Pope Francis ponders whether most people who recite the Our Father really believe any of it.

“We say that we are Christians, that we have a father, but we live — I won’t say like animals — but like people who don’t believe either in God or in humanity,” the pope says. Not only do people act as if they have no faith, but “we live not in love, but in hatred, competition and wars.”

Pope Francis asked if believers really could say that God’s name is “hallowed” in “Christians who battle each other for power” or who “don’t care for their own children?”

Christians pray the Lord’s Prayer and do so together — saying “our” even when they pray alone — because they know the effort required to truly believe and to try again each day to demonstrate their belief, the pope said. “That is why it is so beautiful to pray together, because we help each other to try.”

In addition to the television program, Pope Francis’ conversation with Father Pozza will be published as a book, which will be released in Italian in late November.

In the preface, the pope writes that Jesus gave his disciples the Lord’s Prayer not simply as a formula for addressing God, but also so they would learn how to live as God’s children and as brothers and sisters to one another.

“Jesus shows us what it means to be loved by the Father and reveals to us that the Father wants to pour out on us the same love that from eternity he has had for his son,” the pope said. “I hope that each one of us, as we say, ‘Our Father …,’ increasingly discover that we are loved, forgiven and bathed by the dew of the Holy Spirit so that we in turn are able to love and forgive every brother and every sister.”

PREVIOUS: When we realize that everything belongs to God, we respond with gratitude