Catholics, Lutherans take over a street in show of unity 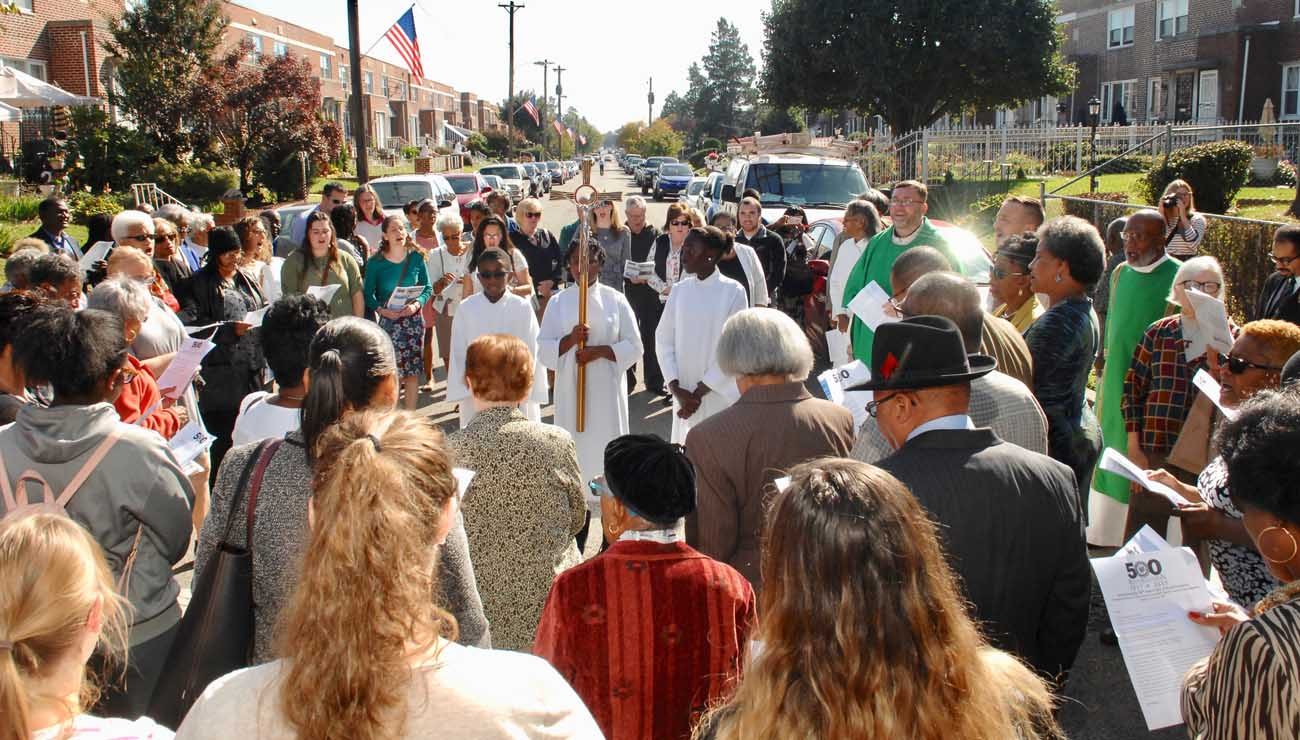 St. Raymond of Penafort Parish and Reformation Lutheran Church, both in the Mount Airy section of Philadelphia, stopped traffic at the intersection of Vernon Road and Gilbert Street in Mount Airy as a public prayer service to conclude the congregations' joint study series, "Remembering the 500th Anniversary of the Reformation" on Sunday morning, Oct. 22.

St. Raymond of Penafort Parish and Reformation Lutheran Church, both in the Mount Airy section of Philadelphia, stopped traffic on Sunday morning, Oct. 22 through a walking pilgrimage from the nearby respective churches.

Immediately after their second Sunday Mass, members of St. Raymond’s walked south from 1350 Vernon Road. Those who attend the Reformation Lutheran service walked north along Vernon Road. Congregants served as crossing guards and the Philadelphia Police Department ensured that all were able to walk safely.

More than 200 members of the two churches assembled at the intersection of Vernon Road and Gilbert Street for a prayer circle as a conclusion to their “Remembering the 500th Anniversary of the Reformation” series.

(See a photo gallery of scenes from the prayer service here.)

“Jesus started something 2,000 years ago,” said the Rev. Nate Preisinger, the interim pastor of Reformation Lutheran Church. “It’s been 500 years since we’ve been divided. We still believe the same Gospel, and we should still continue to reform the church to bring the body of Christ together.”

Father Christopher M. Walsh, pastor of St. Raymond’s, drew spontaneous applause as he shared his vision that in 500 years there would be Christians gathered at the intersection of Vernon Road and Gilbert Street “in greater unity” and that they would “be more aware of what God had already done.”

The prayer service began with the singing of “Amazing Grace” before readings proclaimed from Philippians chapter two and Second Corinthians chapter five. After brief reflections, all joined in a “Litany for Christian Unity” and the Lord’s Prayer. The closing prayer culminated with the words, “May we who have been reborn in one baptism be united in one faith under one shepherd.” Then all engaged in an extended exchange of peace.

“This was very good,” said Marilyn Lamore, a St. Raymond’s parishioner who brought her 7-year-old granddaughter, Kayla, to the event. “I went over to the sessions at Reformation. The thing I learned when we came together was the fact that this is one church that divided many years ago. We are not something separate. We do need to come back together.”

Lamore praised the event that united the two churches at least for one morning. “I think it is good that so many from these two churches came together. It shows the love of God is with us. I think more churches should do this,” she said.

Those from Reformation were also pleased that Catholics and Lutherans came together for the ecumenical prayer. Karen Parks, who has been a Reformation member for more than 30 years, pointed out that Martin Luther was a Catholic. “We do not have a different faiths because we all serve the same God,” she said. “So the prayers we did really filled me up.”

“This is really the great culmination of six weeks of study,” said Charlene Jenkins, also a member of Reformation Lutheran for 30 years. “I attended all of the sessions. I met with Father Chris back in March. We talked about how our churches could be blessed by coming together for this.

“We learned about the Reformation in a new way and I learned things about Luther I didn’t know. I learned that we are really more alike even though we have some differences. I learned that Catholics like to eat. Hopefully we will be able to come together again this spring to have more discussions.”

The Reformation 500 series opened at St. Raymond’s on Sept. 13 with an ecumenical group of Catholics, Lutherans, Methodists and other Protestants. Father Walsh discussed how Martin Luther, a Catholic priest, led a protest against his church. He also clarified the varied stories of Luther posting his 95 theses on a cathedral door.

Father Walsh then discussed the reasons for an ecumenical commemoration of the Reformation, a brief overview of church history, how Christianity was initially spread, Christian martyrs and early church-state relationships. He also explained the papacy before tracing what happened on Oct. 31, 1517 when Martin Luther, an Augustinian priest, shared 95 statements with the archbishop of Mainz in Albert and how by 1555 the Lutheran Church had risen.

“This is just a fabulous series,” said Addie Butler, a member of Reformation Lutheran Church, who attended the first three sessions at St. Raymond’s and the latter ones at her home church. “I think it is important to understanding our combined theology and history. We get to learn about each other’s faith and how we are similar. When it comes down to it we are all children of God.

“I have been a member of Reformation since 1976 and have lived in this community a long time. But until this event I had never been inside of St. Raymond’s. This is my first time here. So this event brings us together,” Butler said.

Minta Brown, a member of St. Raymond’s discipleship team, felt the series had much to offer the local Christian communities. She learned how the schism from the Catholic Church occurred at the first session held at St. Raymond’s.

“I understand the break from the bureaucracy, but I think we can achieve unity,” Brown said. “We are all people of faith who believe in Jesus Christ. More importantly, our Protestant and Catholic churches may seem different, but we are all united in our belief in Christ. That is what makes us all Christians.”

NEXT: ‘Vianney,’ drama on power of confession, coming to local parish