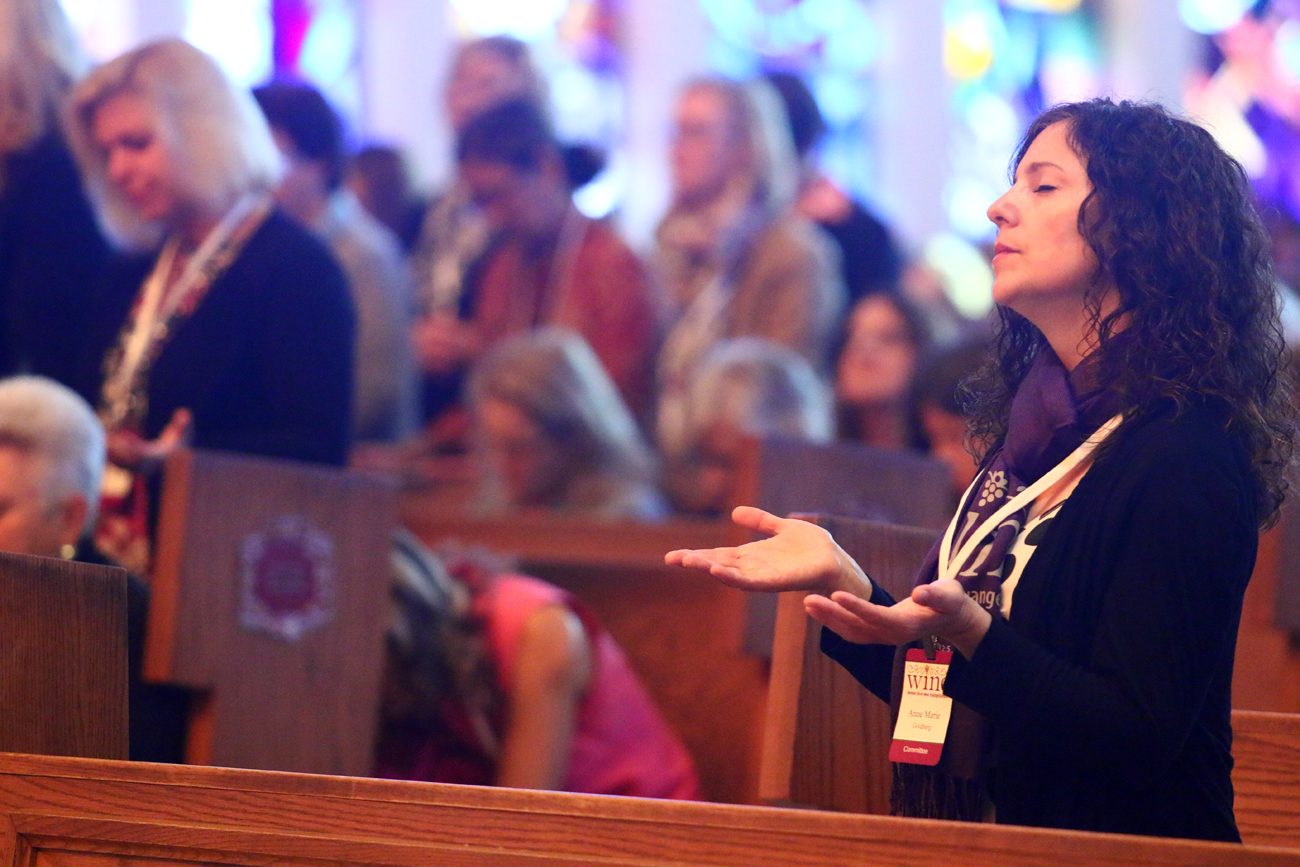 Anne Marie Goldberg prays along with more than 1,200 other women at the WINE National Catholic Women’s Conference at the Shrine of Our Lady of Czestochowa in Doylestown. (Photo by Sarah Webb)

More than 1,200 women from all over the United States were “drawn by love and sent on fire” last Saturday, Oct. 21, at the inaugural WINE National Catholic Women’s Conference at the Shrine of Our Lady of Czestochowa in Doylestown.

(View our photo gallery with scenes from the day.)

WINE also allotted time for a unique mix of activities called “I need my SPACE,” which stands for shopping, prayer, adoration, confession and eating, followed by a door prize raffle.

The conference closed with Mass celebrated by Auxiliary Bishop John McIntyre at 4 p.m.

Peggy Kochka, an attendee from St. Aloysius Parish in Pottstown, requested off from work a couple months prior to the big day.

“I’m just so thankful that I was able to come,” Kochka said. “I think this is absolutely awesome, and for Kelly Wahlquist to put this together, I think it’s awesome for women because we need to stick together. And to get such great speakers together and the music — listening to Amanda Vernon– that was fun.”

Founder and president of WINE, Kelly Wahlquist, said the essence of WINE is that women are radically relational, and relationship nurtures, encourages and strengthens women so they can go deeper in their relationship with the Lord.

The four “tannins” of WINE are sisterhood, Scripture and prayer, the truths of the Catholic Church, and chocolate.

WINE invites women into relationship in several ways including through conferences such as Saturday’s at the shrine; small groups called WINE “clusters;” Women, WINE, and Wisdom meals; retreats and Read Between the Wines book clubs.

“One thing that I find extremely impressive about WINE is how grounded it is in the Catholic faith,” said Karen Sheehy, a WINE specialist in Louisiana who leads “Women, WINE, and Wisdom” meals and who attended the conference. “WINE is light, but it’s also surprisingly deep in the theology that you get and the dose of Scripture.”

While the Lord told St. Francis of Assisi to “rebuild my church,” through much prayer Wahlquist discovered that the Lord is calling women to be women and to work in the beauty of their natural gifts. She believes today the Lord is saying, “Heal my body.”

Wahlquist gave her fiat to this call six years ago when she awoke to a phone call at 6 a.m. from Patti Jannuzzi, who is now a Wine Enthusiast located in Somerville, N.J.

“Kel! It’s Patti. I was just in prayer, and the Lord spoke to me,” Jannuzzi said. “I don’t mean I heard his voice, I mean I heard him in my heart. We have to meet today at the Shrine of Our Lady of Czestochowa!”

“No, we have to!” said Jannuzzi. “If you get up and get ready now and leave, and I leave, it will take us both about a half an hour to get there. We can go to confession and we can go to Mass. We have to go!”

Wahlquist got in her car and found her way to the shrine. After confession and Mass, they went to the chapel, and Wahlquist wrote a petition. It read, “Lord, use me for the New Evangelization.” She put it in the petition box and left on fire with love for the Lord and a burning desire to share it.

Jannuzzi had the idea of praying a nine-year novena for Pope John Paul II’s beatification. With a bit of negotiating, they settled for a nine-week novena and created a website. Before they knew it, they had 5,000 people praying with them. To their surprise, the day after their novena would end, Pope John Paul II would be beatified.

Six years later, this past Wednesday, Wahlquist visited the shrine again. It was quiet and empty.

“I just sat there in awe almost,” Wahlquist said. “It was just this emotion of anticipation but also (feeling) humbled. I was just thinking, ‘Lord, this is amazing where we’ve come in six years to be back at this place and in three days these seats are going to be filled with women thirsting to hear your Word and to know you. This is incredible.’ I was thinking ‘I can’t believe I’m part of this.’”

In her awe and astonishment Wahlquist asked, “Why me? Of all people why me, Lord?”

On that same day, in adoration she looked down at her Bible, right where her St. John Paul II prayer card lain. The page was open to Luke 11:33, which reads, “No one who lights a lamp hides it away or places it under a bushel basket, but on a lampstand so that those who enter might see the light.”

“It just hit me,” Wahlquist said, “And I thought, ‘You lit me on fire with a love for you years ago, and you had a plan that would help me bring that fire to other people. I didn’t see your plan, but you did.’

“So the lesson there is two-fold. Lesson number one is be careful what you pray for — our Lord is generous! Number two, God has a plan of sheer goodness for all of our lives. We just need to trust in him, and trust in that plan.”

NEXT: From founding Italians to today’s Hispanics, parish sees century of change