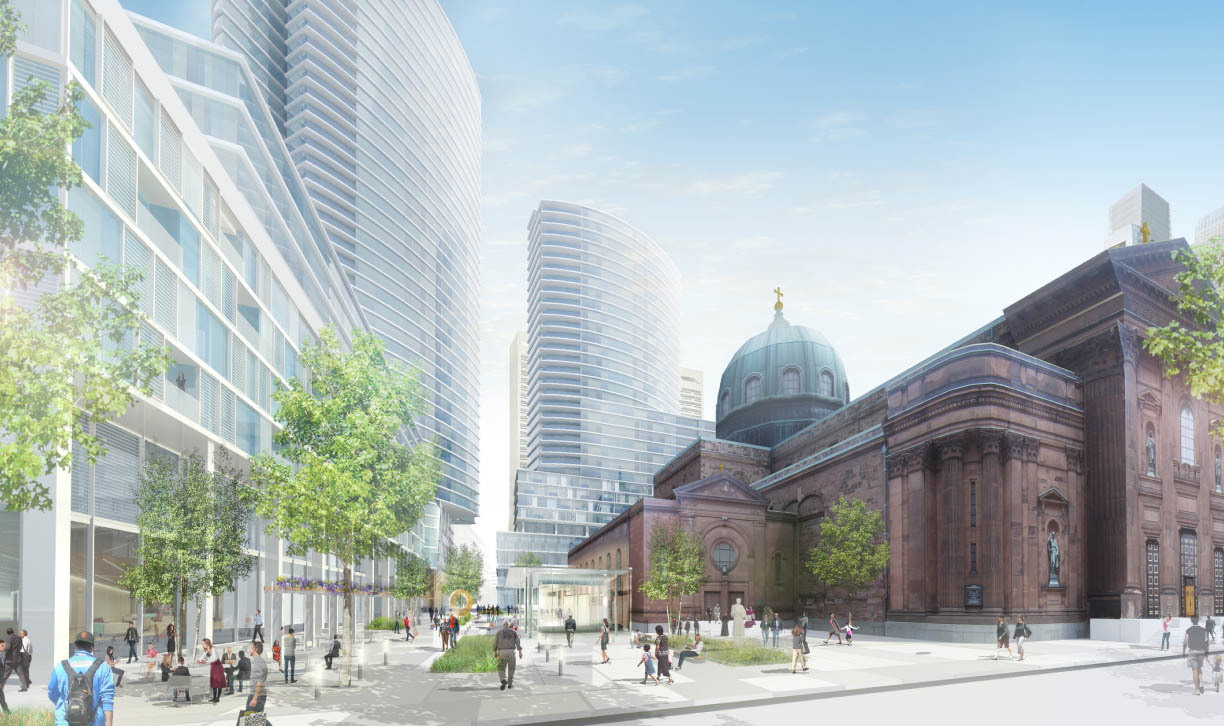 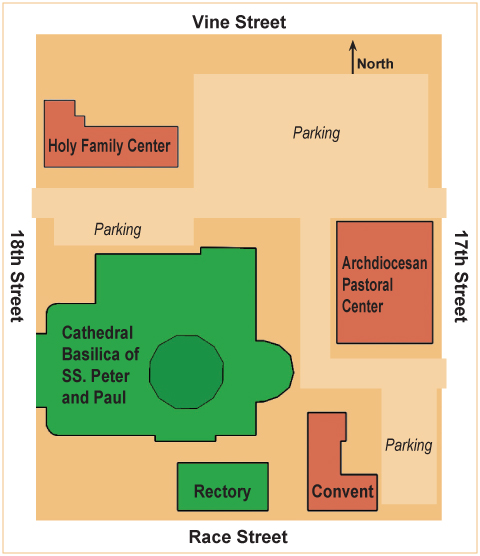 The archdiocesan campus features a 200-car parking lot, archdiocesan office buildings and convent. The Cathedral Basilica of SS. Peter and Paul and its adjacent rectory (shown in green) would not be affected in a redevelopment plan. (Graphic by Barbara Hagan)

The Archdiocese of Philadelphia has begun to accept proposals to redevelop the center city Philadelphia block on which sits the Archdiocesan Pastoral Center and the Cathedral Basilica of SS. Peter and Paul.

The “Request for Qualifications” process announced Monday, Oct. 23 is expected to attract proposals from several real estate developers for a ground lease not to exceed 60 years. The project may be put to bid by early 2018, according to a news release by the archdiocese.

Besides the cathedral, its chapel and the headquarters of archdiocesan offices, the campus contains the cathedral rectory, convent and Holy Family Center, which houses offices and programs of Catholic Social Services.

The parcel is on a prime location overlooking Logan Circle and within view of the grand Benjamin Franklin Parkway extending westward to the Philadelphia Museum of Art. It is bordered by 18th Street, Vine Street, 17th Street and Race Street.

After the proposed sale of Holy Family Center, located on 18th Street adjacent to the cathedral, and a parking area extending to 17th Street fell through in 2012, a vision for redeveloping the entire property emerged in discussions with a neighborhood group one year ago.

The concept at the time was hypothetical, intended only for broad discussion at the time. Now, however, proposals will be drafted for 2.32 acres of the property that may include demolishing the 13-story Archdiocesan Pastoral Center (built in 1969), the four-story Holy Family Center (1960) and a three-story convent (1957) that has not housed religious sisters for several years.

The cathedral and its adjacent rectory on the remaining 1.62 acres would not be included in any redevelopment proposal, according to the archdiocese.

The available area would form an L-shaped property around the cathedral and its rectory that could include one or two large, multi-story buildings with a mixture of retail, residential and office space, perhaps along with public garden areas and underground parking.

In its news release the archdiocese said its office staff might be relocated to another building in center city within one or two blocks of the cathedral, depending on the nature of the proposal.

The building boom of new and redeveloped condominium/mixed-use towers in center city in recent years has made the archdiocese’s property, most of which is parking for about 200 cars, extremely valuable.

The Church of Jesus Christ of Latter Day Saints recently completed its new temple, just one block down 18th Street from the cathedral basilica, on what had been a parking lot, and completion is nearing on a multi-story tower with residential, office and retail capability.

A redeveloped archdiocesan property fully utilizing the potential for high-rise buildings could provide income that might be used to support current and future Catholic ministries.

The ground-lease agreement for Catholic Cemeteries in 2014 provided for lease payments between $1 million and $1.5 million annually for 35 years, after an initial $53 million lump-sum payment.

PREVIOUS: Retreat expected to draw 6,000 teens to Temple U