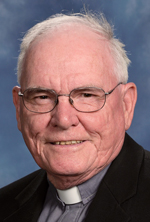 A Philadelphia native, he is a graduate of Northeast Catholic High School and served in the U.S. Army. For most of his career he worked with Sun Oil Company where he was a shipping agent.

He was married to the late Annette Marie (Miller) until her death in 2015. Both were active members of St. Jerome Parish for their entire marriage and parents of two children, Charles Edward (Chuck) and Donna Marie Karolczak.

As a young man Deacon Pavonarius considered the priesthood and briefly studied with the Oblates of St. Francis de Sales, his teachers at Northeast Catholic. In his middle years he chose the diaconate and was ordained a deacon on June 7, 1992 at the Cathedral Basilica of SS. Peter and Paul by Bishop Louis A. DeSimone.

Deacon Charlie, as he was affectionately known, retired from active ministry in 2014.

“He was a loving husband and father and an incredibly devoted grandfather,” said his son, Chuck. “He loved his family and he loved his church.”

As a deacon, “he found great joy in celebrating baptisms and talked about the people he baptized, and he enjoyed taking the church to the people who could not get there,” his son said.

Father Anthony Rossi, a former parochial vicar at St. Jerome, recalls “his greatest virtue was his humility. He was not one to talk about what he did. He was extremely faithful to the sick and dying. He was very hospitable and loved to socialize. I never heard him raise his voice. He loved the Eucharist, the Liturgy of the Hours and his rosary.”

Father Rossi also recalls how active Annette Marie was, serving alongside her husband in various parish ministries and events.

There will be Evening Prayer and a viewing for Deacon Pavonarius on Monday evening, Oct. 30 at St. Jerome Church, Holme Avenue and Stamford Street, from 7 to 9 p.m. There will be a second viewing at the church on Tuesday, Oct. 31 from 9 to 10:30 a.m., followed by his funeral Mass with Bishop Edward Deliman as the principal celebrant and Father Rossi as the homilist.

Also among the survivors of Deacon Pavonarius are his grandchildren, Frank, Nicole and Justin; great-grandchildren Frankie and C.J.; his brother, Leo; his sister, Sister Mary Pavonarius, D.C., and nieces and nephews.

Interment will be at Washington Crossing National Cemetery.