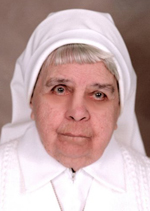 Sister M. Monica Mikutel died Sept. 29 at Mount Nazareth in Philadelphia in the 85th year of her religious life. She was 102 years old.

On Sept. 24 she had been honored at the Religious Jubilarian Mass at the Cathedral Basilica of SS. Peter and Paul, leading the list of the 283 other sisters, brothers and priests who also celebrated milestone anniversaries.

Born Olimpia Mikutel in Norwich, Conn., on Aug. 8, 1915, she entered the Sisters of the Holy Family of Nazareth in August 1933 and professed final vows in August 1941.

Sister Monica spent 62 years serving at Nazareth Hospital in Philadelphia, except for one year in 1947, when she ministered at St. Christopher Home for Children at Sea Cliff, Long Island, NY.

She received her school of nursing certificate from St. Mary of Nazareth Hospital in Chicago in 1938 and earned her B.S. in nursing from Villanova University in 1958.

The funeral Mass for Sister Monica was Oct. 5 at Mount Nazareth Chapel, Philadelphia.

NEXT: Deacon Charles Pavonarius of St. Jerome Parish dies at 80