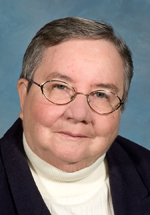 Daughter of Joseph Brown and Ellen Bewely, she was born in Philadelphia and attended Nativity B.V.M. Grade School and Little Flower High School in Philadelphia.

Sister Regina ministered in the Archdiocese of Philadelphia and the Diocese of Camden.

She was the sister of Richard Brown (Sally Ann), Joseph Brown (Betty) and Gerry Brown. She is also survived by nieces, nephews and members of her congregation, the Sisters of St. Joseph of Chestnut Hill.

The funeral Mass was celebrated Aug. 23 at St. Joseph Villa.

NEXT: Sister Elizabeth Ledger dies at 90; taught in three dioceses