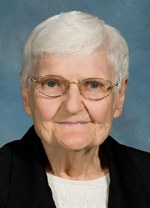 The daughter of Eugene Ledger and Helen Dugan Ledger, she attended St. Francis of Assisi Grade School in Norristown and West Catholic High School in Philadelphia. She entered the Sisters of St. Joseph in September 1952 and professed final vows in August 1960.

Sister Elizabeth taught in the Archdioceses of Philadelphia and Newark and the Diocese of Allentown.

Her funeral Mass was celebrated Sept. 21 at St. Joseph Villa.

She was the sister of the late Sister Marie Eugene Ledger, S.S.J., and Geraldine (Theodore) Prestia. She is survived by her aunts Helen Corbo, Denise Schlosser and members of her congregation, the Sisters of St. Joseph of Chestnut Hill.

NEXT: Sister Monica Mikutel, 102, dies in the 85th year of religious life