Mass is a time of silence and prayer, not small talk, pope says 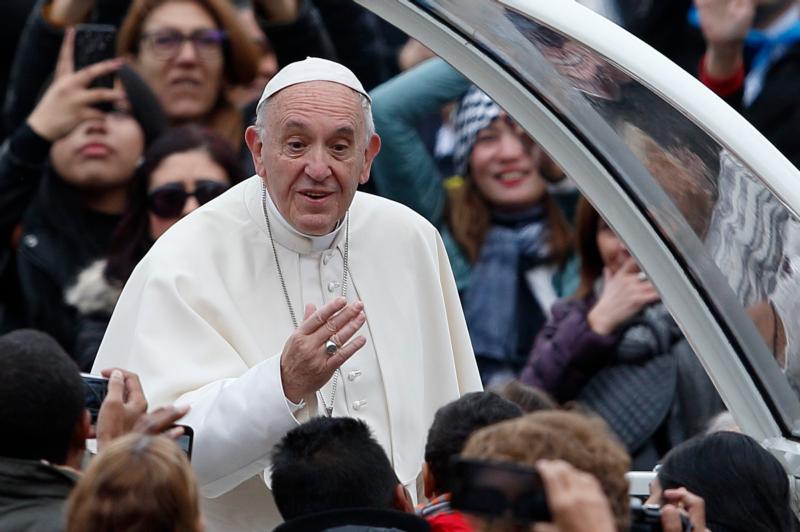 Pope Francis greets the crowd during his general audience in St. Peter’s Square at the Vatican Nov. 15. (CNS photo/Paul Haring)

VATICAN CITY (CNS) — Mass is the highest form of prayer and not an appropriate moment for small talk, Pope Francis said.

At church, Catholics should spend their time in silence before Mass, preparing “to meet with Jesus” instead of engaging in “chit chat,” the pope said Nov. 15 during his weekly general audience.

“Silence is so important,” he said. “Remember what I told you last time: we are not going to a show. Silence prepares us and accompanies us.”

The pope continued his new series of audience talks on the Mass, reflecting on the Eucharist as a form of prayer that is “the highest, the most sublime and, at the same time, the most concrete” way of encountering God’s love.

“This is the greatest grace: to experience that the Eucharist is the privileged moment to be with Jesus and, through him, with God and with our brothers and sisters,” the pope said.

In the Gospels, he continued, Jesus teaches his disciples that the first thing needed to pray “is to know how to say ‘father'” and to trust in God with the humility of a child.

Christians also must allow themselves to be “surprised by the living encounter with the Lord,” he said, and not simply “talk to God like a parrot,” repeating the words of prayers without thinking.

Pope Francis said the Mass is also a gift and a consolation where Christians discover that God’s greatest surprise is that he “loves us even in our weakness.”

“The Lord encounters our frailty,” the pope said. “This is the environment of the Eucharist. This is prayer.”

NEXT: Praying for Judas Iscariot’s soul is an ‘admirable compassion’