In one hand shake, lifelong gratitude for being Catholic 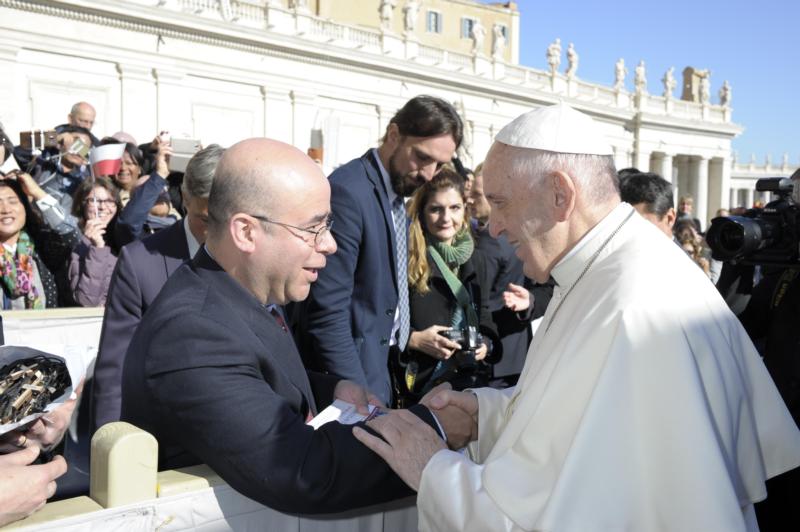 Every now and then, I find in the offices of pastoral leaders and theologians, as well as in the homes of some families I know, a picture of them shaking hands with one of the recent popes.

When I know the person well, I ask, “What was it like to hold the pope’s hand?” For some, it is a formality. For others, a memorable moment.

There are about 1.2 billion Catholics in the world. What are the chances that I would ever meet the pope face to face, hold his hand and engage him in conversation?

Well, it happened this past Nov. 8, 2017, while in Rome for some meetings. I met Pope Francis. This was the first time meeting with a pope.

What was it like? I was filled with what I would call “Catholic awe.” Yes, a profound sense of gratitude invaded me for being Catholic. Here I was with the bishop of Rome, the pope!

Pope Francis, the successor of the apostle Peter, gazed into my eyes, listened attentively and smiled. The words from Mark’s Gospel referring to the encounter of Jesus and a young man immediately came to mind: “Jesus, looking at him, loved him” (Mk 10:21).

It was a short encounter, yet profoundly intentional. As I observed him engaging with other visitors, he did likewise. People I know who met with Pope Francis and previous popes described their encounter in similar ways. Maybe the grace of being present comes with the calling they received.

I shared with him about my research on Hispanic Catholics in the United States and my involvement in the process of the Fifth Encuentro of Hispanic/Latino ministry. As I mentioned the V Encuentro, he lit up and said, “Ah, yes!” He knows that this process is taking place and remembers its importance for the life of the church in our country.

While we spoke, we held hands. I held his strongly. It was a small, yet true sign of ecclesial communion. The moment reminded me in a unique way of how important the pope is for Catholics and the unity to which the baptized are called by being in communion with him.

A personal and sincere encounter with the pope thrusts differences about church policy, theological debates and styles of leadership to a secondary plane. He is the pope. Being in communion with his teaching and leadership as we walk along the journey of history makes us a stronger church.

Tens of thousands of Catholics from around the world travel every week to Rome to see the pope. Most never see him up close or speak with him. Yet, being with the pope is a sign of communion that gives them life. They know that they are part of something bigger and noble. They are Catholic.

They speak many languages, come from diverse cultures and have different ways of looking at life. But in Rome, they are one.

Upon my return, family and friends asked me, “What was it like to hold the pope’s hand?” Now it is my turn to share my witness. I can also share the pictures that captured that moment of grace.

A friend told me, “Let me hold the hand that held the pope’s hand.” An immigrant grandmother from Mexico hugged me saying, “I want to partake of the blessing you received when meeting the pope.”

It is moments like this, the encounter with Pope Francis and the crowds at St. Peter’s Square, that remind me that I am part of something beautiful. What an honor to hold the pope’s hand in gratitude for being Catholic.

Ospino is professor of theology and religious education at Boston College. He is a member of the leadership team for the Fifth National Encuentro of Hispanic/Latino Ministry.

PREVIOUS: Go simple, and cut through the packaging of life

NEXT: In U.S. Virgin Islands, it’s a long way back to ‘normal’